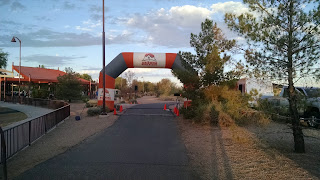 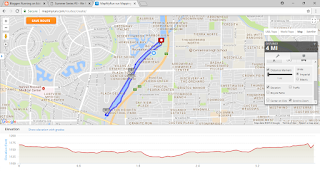 
Next to Thanksgiving, I think the Fourth of July is probably the next biggest racing day for road races.  So I certainly couldn't miss out on that...

I looked around and the only race in town was the Arizona Road Racers Sunrise Series way out in Peoria.  It was a bit of a drive for me and I started to question my sanity when I saw the temperature gauge hit 88 degrees on my car.  Luckily, it calmed down and got to a "cool" 85 when I rolled into the Rio Vista Park in Peoria. 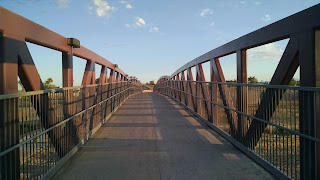 I rolled in just after 5:30 AM for the 6:30 AM start.  I had a prime selection of parking and managed to pick up my bib in short order. 15 minutes there was a line.  I wound up circling around the park checking out the bike trail and the fishing / duck ponds. 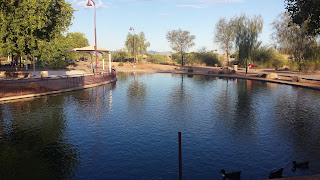 I used the bathroom and did a brief warm-up.  Just walking around worked up a pretty good sweat for me.  I knew this one was going to be tough -- the question is how badly the heat would affect me. 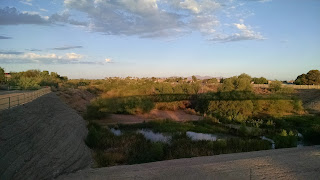 The race started on time and due to the large number of runners and the limited amount of space on the bike trail, they had a staggered start based upon projected mile pace.  They did a fantastic job with the start and I felt like I started with people in my category.  It was still a little congested on the bike trail but it forced me to start off cautiously.

I felt good in the first mile.  The course is a very mild downhill and I was using bursts of speed to work my way around packs of runners.  My pace felt controlled but still fairly fast.  I could feel the sun on my back and it was just darn right uncomfortable for running.

I was upset because I hadn't brought my Garmin.  I love knowing my pace, whether the course was accurate and just how much longer I have to go.  The race director did have mile marker posts out and I was tempted to ask for splits but the folks around me were either wearing earbuds or talking.  I was still running with the 8 min / mile pace, so I figured I was on pace. 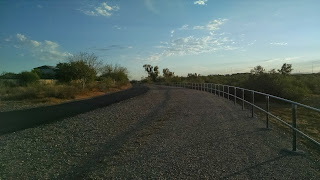 There were some rolling hills.  They weren't awful but the bike trail did dip and rise out of a little gully.  It seemed like most of the course was uphill.  At first I was able to charge up the hills -- thanks to some hill charge repeats I do weekly, but as the course wore on the heat got to me and I was just running out of gas.

Mile 2 I still felt fairly good.  Near the end though I could tell I was going to suffer with the heat.  My turnover was struggling and I was dripping sweat.  It is always satisfying to note when you are half way. 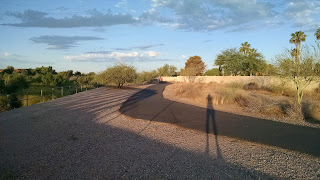 The way back was a suffer-fest.  The course was a loop and the way back seemed primarily uphill.  Again, just a few ramp-like hills and a slow, steady grind.

I was passing a few people who clearly were suffering from the heat, but at this point I was getting passed too by more consistent runners.  I tried working on my turnover and just telling myself a little bit more.  I grabbed some water from the aid station, took a sip and dumped the rest over the back of my neck. 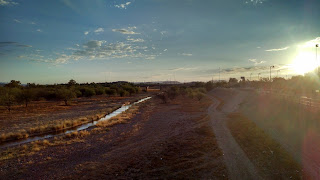 The final mile I was able to regroup a bit.  Yes, it was a grind but I felt my pace sort of come back to me.  I knew the finish line was in site and while I knew I was out of any sort of medal contention I was trying to push for the best time -- without making myself sick from the heat.

I pushed it to the finish by crossing a short bridge and then a quick right turn to cross under the inflatable arch.  I am not sure I would've had another mile in me given the temperature and my pace. 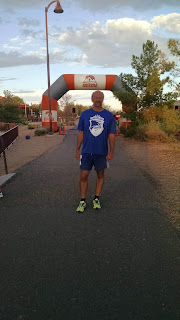 
I was pretty happy with my time -- it was totally expected.  Using some online calculators, it puts me at a 25:15 5K, which is about what I am running these days. 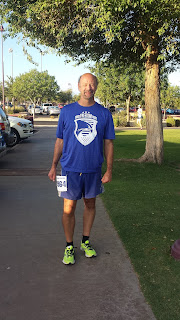 I walked around a bit, sipping on Gatorade and seeing if I knew anyone.  I am starting to recognize some of the folks from other races.  Seems like I am not the only race junky here.

My head was buzzing but I didn't feel totally pukey like other races.  In fact, I felt a bit better than I expected.  Maybe I had a little more to give on the course today. 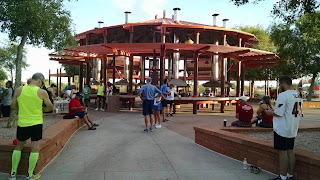 Eventually I did grab some food.  This race didn't have any shirts or medals, but certainly made up for it with the post-race spread of food.  They were also thoughtful to the vegetarians and had a veggie burger.  Score!  The food consisted of hot dogs, burgers, watermelon, and cookies and chips.  Plenty to eat and they were pretty generous with it too. 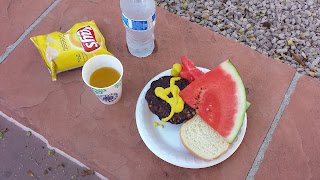 I wound up hanging around for a while eating and just enjoying the park.  I was in no rush and it was a beautiful morning just to bum around.

Well worth the $25-ish dollars I paid for this race.  I'd definitely do it again.
Posted by Eddie Gaul at 10:45 AM