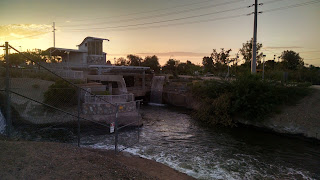 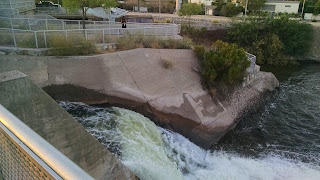 Before I came to Arizona, I signed up for the Arizona Sunrise Series.  It is a series of 7 5K races scattered around the Phoenix valley.  Today's race was at the Arizona Falls bike trail.

The Arizona Falls is a spot where water is diverted to various canals in the Phoenix area and is home to a bike trail.  The main attraction here is a waterfall that generates power.  Apparently there is some historical aspect of it, being that it has been used as a water irrigation canal since the Native Americans inhabited the area. 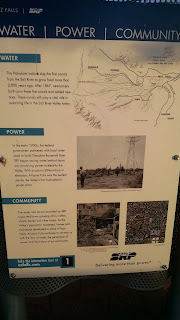 I got to the race site around 5:30 and managed to snag a pretty awesome parking spot.  Finding the race location wasn't hard and I quickly grabbed my shirt and bib and spent some time checking out the falls.  The smell of stinky fish permeated the air. 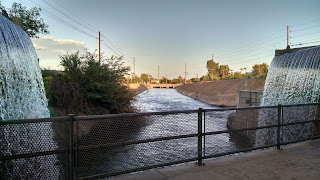 It was already 92F degrees according to my phone and car.  It was hot and just walking around made me sweat.  I knew this race was going to hurt and I suspect my time wasn't going to be a terribly good one.  It was though, just a "5K".

The race started at 6:30 and the sun was up and hot at this point.  It easily went up another degree or two.

The race started on the north side of the canal trail and headed east -- right into the sun.  The first part of the trail is packed dirt.  It was actually pretty nice terrain to run and I was wearing my "fast" shoes with less cushioning on them.  Eventually, though, the trail does come to concrete. 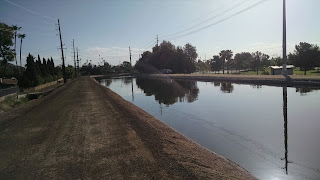 The first mile I was hemmed in pretty good.  The race organizer didn't really encourage people to line up according to pace and I had started about half way back.  The first third of a mile or so was me working my way around people.  It was too bad but it did cost me a few seconds.

I settled into my pace and I could feel the effects of the sun hitting me and my mouth was dry.

The race director is a pro at this and he had 3 water stops... at about .75 miles each.  I blew through the first one despite feeling the need to pour a cup of water on myself.  Doing so gave me a little bit of open road to work with. 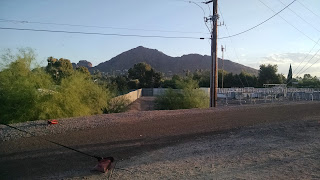 I reached the bridge that crossed the canal and went to the south side just over 1.55 miles.  I was pretty gassed and the darn heat was just weighing down on me.  I was sweating like crazy and at the second aid station I took a tiny sip of water and dumped the rest over my head.  All I wanted was to take an ice cold shower.

I wasn't too surprised to see my mile 2 was slower than my first.  In fact, I was surprised it wasn't slower.  I wasn't getting passed at all though and I was doing some passing, so I knew others were feeling the heat just as much as I was.

Mile 3 was a reality check.  I was hurting and my ears were ringing a bit.  I could feel the first steps of heat exhaustion coming on.

I saw some targets ahead of me that I knew I was faster than and I worked my way up to them, passing them.  The race was chipped time so I was pretty sure they had started closer to the front but still, it was satisfying to have something to work off of.

I really pushed it hard to the finish -- turning on the jets as much as I dared to. Sort of shame that the finish line was out of view until 3 miles as I might've hit it a little harder earlier. 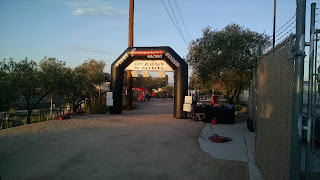 
I was completely gassed at the end and woozy.  The heat had really gotten to me and the fact that I had pushed it to the end almost put me over the top. 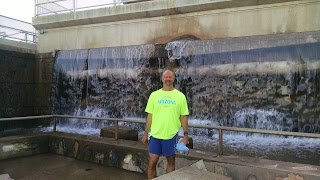 I grabbed some Gatorade and walked it off.  I was sweating profusely and it just wouldn't stop.  I grabbed a banana and ate it and almost regretted it.  I eventually found a shady spot to sit and socialized with whomever decided to sit near me.  It seemed like a lot of people were hit hard by the heat.

Given the conditions, I ran about as expected.  This course would be fast -- if it was about 40 degrees cooler.  Alas, today it was like running under a hot hair dryer.  Not pleasant at all.