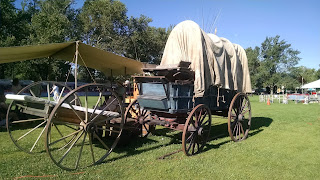 For those not in the know, this weekend is Pioneer Days, a weekend set aside in the state of Utah to commemorate the arrival of the first settlers to Utah.  Most businesses have a day off and the government offices close on Monday.

So in a way, is feels like a mini Fourth of July here, with parades, fireworks, and celebrations celebrating Utah culture.

The Hand Cart Half Marathon is put on by the South Davis Recreation Center and it lines up with their racing series.  The SDRC offers a bunch of really nice races that are very affordable, hence the reason why I do them.

The race starts early -- 6 AM to beat the heat.  I am incredibly thankful that the race organizers do that.  We've had a dreadful summer with the heat and being able to get out early really helps. 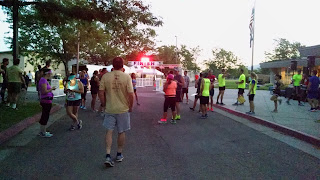 That does mean, however, that I have to be up at 4:15 and out the door by 4:45 to get my bib.  Packet pickup was a snap and within 5 minutes after arriving I had my gear.  I decided to drive to the gas station to get some Tums.  I had had spicy food the previous night and I could feel a slight bit of heart burn.

Like most of the SDRC races, this one started a few minutes late.  I wanted to finish around 1:55 and I was a little worried about the hills.  Also, the second half of the course has rolling hills, so I didn't want to be hung out to dry for them.

Around mile 2, you cross a railroad crossing.  Just as I was approaching the warning lights went on and the gates were coming down.  I dashed across and was one of the last ones to do so.  I saw some volunteers there taking numbers of people who were going to be stuck at the crossing.

Suffice to say, that they were there for a good three or four minutes.

I was glad I had dodged that bullet but it also meant I wouldn't have anyone tailing me, putting the pressure on me to maintain a pace.

Around mile 2.5, you jump on the Legacy Bike Trail system.  For regular readers, I ran on this last week for the Legacy Half Marathon (and a bunch of other races).  It is flat, but not terribly exciting to me. 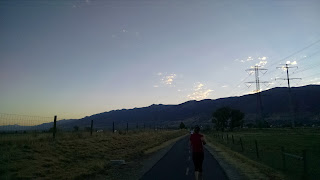 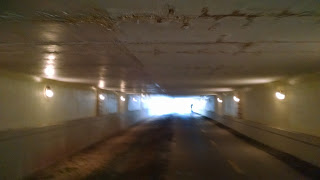 I wound up running with a group of people and was able to pick off a number of runners as the race progressed.  I did have to make a pit stop around mile 6.  Since there was hardly any behind me, I was able to quickly duck behind some bushes and take a 20 second nature break.

Around mile 7, the course goes back to surface streets.  You are greeted with a highway overpass that takes you over the 215 and 15 freeways.  Just as you cross the freeways, you have to climb another substantial hill to get to the road you'll be taking to the finish line.  I saw a number of people walking up this hill and I did my best to continue at my current pace.

The last 5 miles or so follow a main road through Farmington and Bountiful.  Traffic was light and the race organizers did a good job at making sure we could safely get through the major intersections without interruption.  It is also at this point that there are some rolling hills.  At one point, you'll be cruising fast downhill, only to be "crawling" up another hill.

The last 3 miles or so are a gentle up hill.  At this point, the course had thinned substantially.  I have run the 5K race a bunch of times and I knew the final 1.5 miles or so.  It is always one of the toughest parts of the course because there isn't a whole lot to look at and it is just a gentle climb.  You can see the traffic light ahead too where you make the final turn to the finish, but it seems so far away.

Also, the last 5 miles are on banked roads.  My hips and back wound up paying a price after the race.  I am so glad I don't train on roads like that any more. 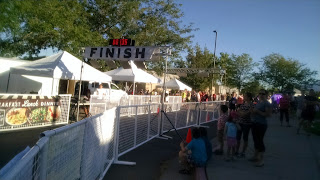 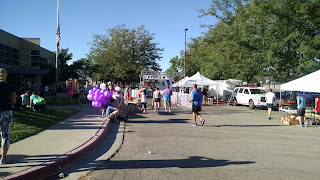 
I felt like I was running quite well at the end.  I was passing more people than I was getting passed by and I didn't feel like I was in desperation mode.  However, my time was a disappointing 1:55:56.  The bathroom break cost me some time and of course the rolling hills.  Looking at last year's race, it was 10 degrees cooler and I did hit a 1:52, substantially better.

5K racers and half marathoners each were awarded a finisher's medal.  I was sad to learn that I wasn't an age group winner (I won one in 2012 and it was a super nice award).

They had plenty of refreshments at the end including Corner Bakery muffins, sports drink and fruit.  My race entry also paid for a free breakfast, which also was a plus.  For $45 I really got my money's worth.

The course was well marked and supervised.  The mile markers were a clusterf*.  They seemed to be consistently off until about mile 10 or 11.  They had a TON of water stops, with more staged at the end, which really helped.  I did carry my own fluids though and I went through it on account of the heat. 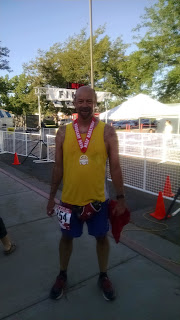 I liked the shirt and medal.  The recreation center always does a wonderful job with their designs and they give you a ton for your money.  I will continue to patronize their races. 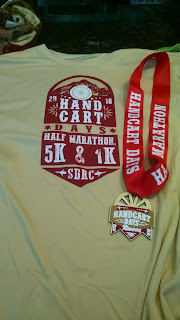 Overall, I am slightly disappointed with my overall time. I did feel like I ran evenly though.  I tend to be a fast starter and the course is a downhill one at first, so it is hard to not get pulled out faster.  The hills at the end always chew me up.  Either way, I had fun and it was a good social experience as well.
Posted by Eddie Gaul at 10:20 AM