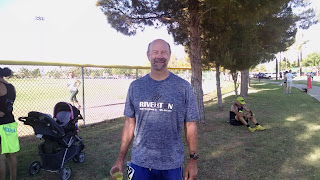 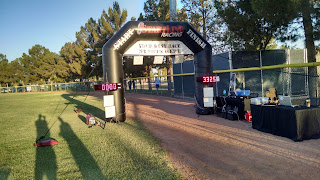 
This morning I did race number 3 in the Arizona Sunrise Series.  Before moving here, I signed up for the entire 7 race series for a flat fee.  Each race includes a t-shirt, part of a medal, and a full supported 5K race.  Each race is held at a different location -- 2 weeks apart.  So I figured it would be a great way to introduce me to the Phoenix area.

This 5K race was held at Freestone Park in Gilbert.  I've raced here twice so far (here and here) and each time the course is different from the last time I've run it.  Some parts are exactly the same but each route has been different.

It is a really nice park and I actually enjoy the course.  It does have a few hills but overall I feel like it is a good course for a 5K. 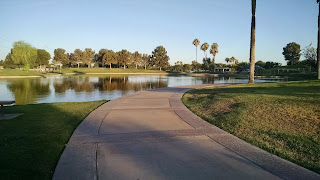 
I rolled in at 5:45 AM for the 6:30 race start.  The parking lot was swimming with cars and people, but I was still fairly early and managed to snag a good spot.  Check-in / bib pickup was super easy.  I got my shirt and bib and headed to the bathrooms.

My warm-up was pretty limited.  It was already really warm so I kept it to some light drills and a very short shake-out run.  I felt a little sluggish, but I knew once the gun went off that my legs would snap to attention. 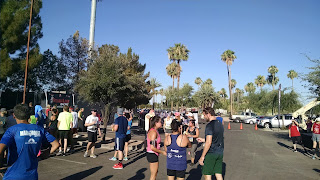 The race started precisely at 6:30 and we started running along the warning track of the baseball field.  It was crowded and clearly some folks didn't understand the unwritten rule of lining up for their pace.  I wound up passing at least a 100 people within the first half mile.  It was congested but I managed to get a lane to myself.

Within a third of a mile or so we were dumped on to a canal path (after speeding down a mini mogul).  This is another warning track lined with crushed dirt.  I had worn my speed Saucony shoes that are super weight.  I normally wear my Brooks Adrenalines but today I felt speedy with the slipper like light-weight shoes that I only break out for 5Ks.

I was still passing people and soon we were got off the dirt canal trail and were dumped onto the street.  I am pretty sure we weren't supposed to run in the bike lane along the main drag and were supposed to run on the sidewalk.  But there were no markings or volunteers there and I was more or less following the previous runners.

Eventually we looped back into the park and did a circuitous route before hitting a turn around sign.  My Garmin read about 1.56 miles at that point.  A hair long despite my best efforts at running the tangents.

I did dump a cup of water over my head at this point.  I was hot and the race director had planned accordingly.  There were a whopping 5 water stations on this course.

I was hurting after the turn around and also hemmed in.  I am pretty much a middle-of-the-pack runner these days so running on a standard sidewalk was challenging.  I had folks coming at me and was nestled in the back of another group.  It took a bit of patience and a sudden burst of speed to work my way around them.  I probably lost a few seconds here.

The last mile was a grind.  Clearly, I've got enough gas to go 2 miles at 5K pace but that last mile is always the worst.

At this point, I was running solo.  I had a few people I was working at tracking down but for the most part, no one was behind me.  I could feel myself getting hazy as I made my way back along the canal trail.  Why did it have to be so hot? 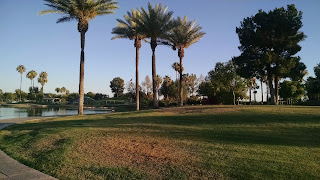 I kept looking for the finish line, hoping it would be magically closer than I thought it was.  I passed a few more people on my way in and crossed a hair over 25 minutes. 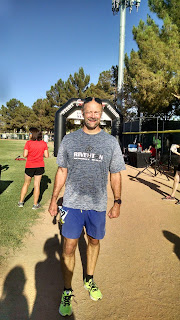 
I felt like my time was going to be a lot faster than it was.  I had done sub 8 minute miles for the first two miles.  I really faded at the end and I think part of it was the heat. I just didn't have the speed endurance to hold the 8 minute mile.

I quickly recovered and grabbed some Gatorade and a banana.  Food offerings were pretty standard: bagels, bananas, sports drink and granola bars. 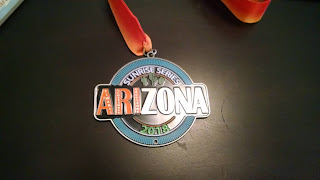 Part of the series is that for each of the 5Ks you get a letter for your Arizona medal.  This week's was "I", which I have added above. 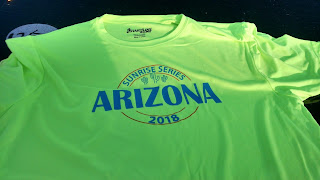 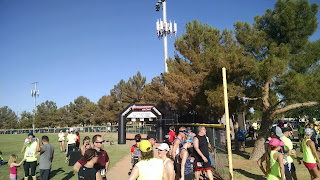 I wound up socializing for a bit before heading out.  I finished a lot better in the overall standings than I thought I would, but a disappointing 7th in my age group.

I really felt like I had run well here. Unfortunately my time didn't really reflect much improvement.  I lost a bit of time being hemmed in and the course measured up a smidge long, so I am still hovering in the low 25 minutes for a 5K -- a far cry from the 20:30's I used to run regularly.