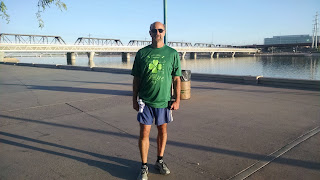 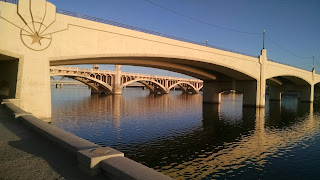 
I totally didn't expect to do this race.  After yesterday's 5K I figured I was done with racing for the weekend.  However, I turned to the racing websites and found another one a few miles down the road from me.

The Arizona Road Racers is a group I am familiar with.  In 2015, I ran their Desert Classic Marathon out in Surprise, Arizona. They too have a summer series over 5 races.

On a whim, I set my alarm for 5:15 and if I woke up feeling stiff or not up to racing, I'd just go back to sleep.  With a 6:30 race start, it didn't leave much time to think about it, but luckily the race was literally an 8 minute drive down the road.

I woke up in the morning and feeling pretty good (despite a calf cramp in the middle of the night), I figured why not.  I had had a lucky streak at the casino the previous today, so my racing budget was intact. 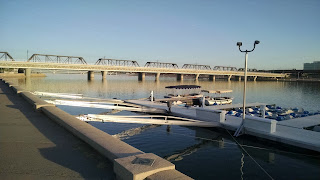 
I got one of the last "good" parking spots as I rolled in around 5:45.  I ran to the organization line and paid my $30 for the race entry.  I noticed right away that there were a lot of runners --- this race was obviously a popular and competitive one.

I also realized that I had forgotten my Garmin. Normally, I never forget this device, but in my rushed haste in the morning, I had totally forgot it (I brought everything else).

I cycled through the bathrooms and took a few extra pictures of the area.  I normally run along this route every day so I was 100% familiar with the course.

I lined up with the other 8 minute / mile folks and the race started off in waves.  There were close to 500 runners on a small bike trail.  Luckily people were lined up correctly and I really wasn't hampered in establishing my pace.

The first mile took me west along the bike trail towards the dam bridge.  I had just crossed that bridge the previous weekend and despite having run a 5K the previous day, I felt really good.

After that we headed west towards the airport for another mile.  At the mile 1 marker, I asked nearby runners what we had just run.  Granted they might have started earlier or later than me, but it gave me a good approximation that I was on target.

With a bit of a tailwind I stepped on the gas a bit.

The route turns around at the Priest Road Bridge.  There was a bit of a hill climb here but I knew I'd get that hill back on the flip side.  Other than that blip, the course is really really flat.

Around the mile 2 marker I again asked a runner where we stood time-wise and she replied back that we were hovering around 8 minutes per mile.  Solid!

I was really hurting on the final mile.  There was a little wind coming at me and everything felt great, but I was getting that 5K buildup of lactic acid in my legs.  I could feel my stride getting longer but my turn over less quick. 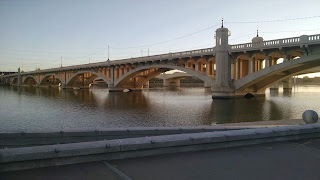 I crossed the finish line in 25:01. I asked people with Garmins and so forth what we had just run and every one of them said 3.10 on the button.  So I am completely confident in the distance of the course.  I think this was the first accurate course I've run in a while.


Despite a slower time than my previous 5Ks, this one translates into one of my better times.  The other courses were shorter and resulted in faster times.  When my Garmin measures .1 to 0.05 of a mile short on a 5K, it likely is short.

They had a pretty good spread of food. Cookies, bagels, fruit, chips and water.  I grabbed a banana, water and believe it or not some potato chips and relaxed a bit.  Again, I felt really good: I had just run another 5K faster than the one I had run the day before.

I was kicking myself for not having a Garmin though. I really wish I could've shown my splits.

I paid $30 for the race.  It was super organized but they could've used more bathrooms.  5 for nearly 500 people was definitely not enough.  The park facilities were being cleaned so you couldn't use those.

I also didn't get a shirt.  I think if you sign up for the series or pay extra for it, you can get a tank-top.  I am not fond of tank-tops so it isn't much of a loss.  I did wish I had gotten a little bit more for my money but it's all good.

This race was empowering to me and a confidence builder.  Definitely not a PR but I felt like I had run well and was in command of myself.  Hopefully this translates into some faster 5Ks down the road.
Posted by Eddie Gaul at 4:33 PM