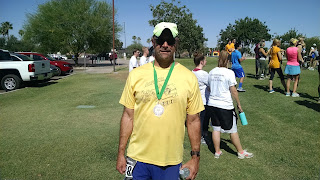 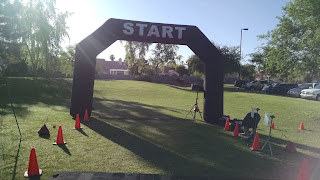 
I used to run a lot of 5Ks.  In the good old days, I'd pretty much do a 5K (or even two) a weekend and most of them were for charity or a recreation center.  As time has gone on I've drifted into longer events which usually wind up being for profit events.  That is fine... things change.

But now that I am in Arizona and with daytime temperatures reaching into the mid 90's, doing races longer than 10 KM get to be a lot tougher.  It seems that there are races out here, but most of them are 5 KM.

So while trolling the websites for a race, I found the OUR East Valley Phoenix Rescue Run. This group rescues young people from the sex trade and all the money generated from the race went to support that cause. Standing there before the race started, it reminded me a lot of the days went 75% of the runs I did were for charity. 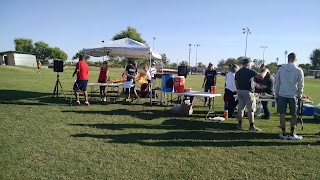 I am usually a little skeptical of inaugural / charity races.  They tend to be not organized very well.  But I was looking for something to do on Saturday morning and decided, why not.  I could be patient. 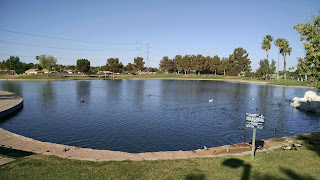 The race was held at Freestone Park in Gilbert Arizona.  Beautiful park and it looks like a gem for the city.  Lots of things to do there.  The race started at 8 AM, which in my opinion was a bit late, but the temperatures weren't too awful.

Packet pickup was a snap and I did a brief warmup and I was pleasantly surprised to see the race start on time.  (The guy organizing it, Matt -- looked competent and clearly he was a runner).  The event was also chip timed.

I started off and the first quarter mile or so was on some rough grass that eventually lead to a dirt trail.  It was like running on the warning track of a baseball field.  Not super great for picking up speed but soft on the joints. 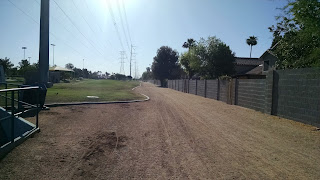 The trail eventually led to the bike trail, which was more crushed gravel / sand.  I had gotten a good start and was feeling pretty good.  The aches and pains from all the half marathons I've done were a distant memory.

I wasn't sure what I had for a 5K -- it's been a while since I've run one -- and the lower elevation was definitely playing to my benefit.

The first mile was sort of silly.  You basically made a turn to the east at the juncture, ran about a third of a mile down the bike trail, came to a sign, turned around, came back to the juncture and ran it again.  Initially I think the course design wanted you to do that turn around as you came back.  It led to some congestion, but being that this was a fairly small race it wasn't too awful and led to getting some cheers from everyone. 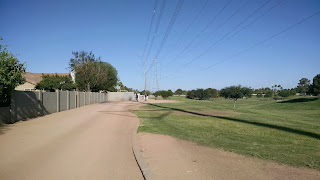 Finally you head west along the bike trail and those who were racing separated themselves from those just participating.

I was feeling pretty good although I was already dry mouthed.  I was running pretty evenly and didn't feel like I was dying.  Luckily, it was just a 5K and at the turnaround loop I didn't reach for any water.  It was nice to run on pavement here though and I could get a bit of a bounce after each stride.

After making the turnaround loop, you made your way back to the start line.  I could tell I was tired and reaching my maximum.  My stride lengthened and slowed down.  There were awards at stake and for a small race I wondered if I would qualify if I didn't win it out right.

I had a lot left at the end as I cranked it to the finish line breaking 24 minutes.  However, the course measured up a bit short (general consensus).  Looking at the MapMyRun course mapping, it is 3.11 miles, but I think the east section turn around was a bit short.  It should've gone to the last house on the street where as the racers turned around from the 3rd house. 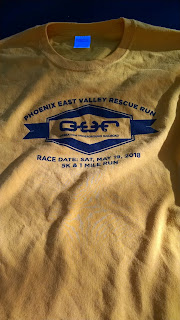 The race went well for me.  There was some delay in getting the awards out, but generally speaking, the race was super well organized and it felt good to contribute to a worthy cause.

I registered a few days before the event for $25.  I got my money's worth.  A cotton t-shirt, an age group award, and food and drink at the end.  They had basic supplies: water, fruit and some vendors were providing food as well. 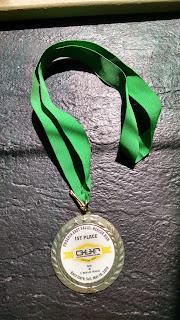 I did well on the run and felt like I had raced with a solid effort.  It also gives me some idea of where I am at fitness-wise.  I did expect a slightly faster time given that I am now racing at 900 feet elevation versus 4300.  The course had a small hill or two but primarily it was flat and fast.

They had a good mix of runners there.  From casual runners participating in a charity event to those a bit more serious.  People were friendly and I wound up meeting several people there (including a fellow Utahn).
Posted by Eddie Gaul at 11:40 AM