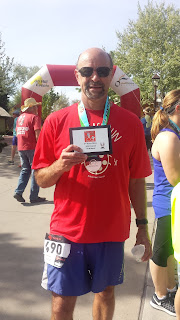 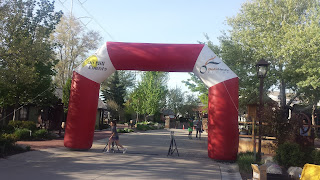 
It seems sort of fitting that my last race in Utah will be the Fantasy Run.  When I moved to Utah in the summer of 2012, I ran the Kiwani's 5K.  It was my first race in Utah and the course that I ran the 5K on, is the exact same course for the 10K. However, to get the 10K in, I would have to run the course twice.

With me moving to Arizona, I definitely wanted to get a final race in.  It would give me a chance to see everyone (I didn't see too many other runner friends on account that there was a much bigger race in Provo).  But I did get a chance to say good-bye to OnHillEvents race director Joseph C.

The race is held at Gardner Village, a mere two miles or so from my house, So logically it was easy.  I would've signed up for the half marathon, but my hope was to get there at 8:30, run the 10K and split right away as I wanted to hit the road.  I had a 6 hour drive ahead of me and I thought a half marathon would've been too much. 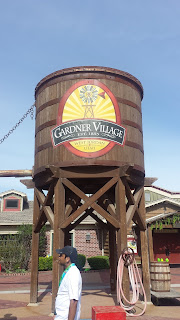 I picked up my packet on Friday night and grabbed dinner there.  So obviously the tie-in / promotion with Gardner Village earned them my dinner money.  Packet pick up was a snap and I made small talk with the race director and a few of the volunteers.

On race morning, I got in around 8 AM and used the facilities.  The race started off a bit late.  I guess the race director's computer decided to do a critical update right before the race.  It was frustrating to me because I wanted to run the race and get out of there.  My goal was to be on the road by 11 AM. But stuff happens.

The race started at about 8:50 and it was getting warm.  The sun was blazing and while the overall temperature wasn't bad, it just felt hotter than it should've.

The race is held in the parking lot of Gardner Village.  It quickly exits the parking lot and goes onto the Jordan River Bike Trail.  I normally run to the north but the race went to the south.  I don't go south too much.  I still knew the course and for the most part it is flat as can be.

There was a bit of a headwind as we started.

The 10KM racers started first (with the 5K following a few minutes later).  The leader of the race took off and quickly was lost from the sight.  I found myself in third place tailing the second place runner.  Another runner was behind me doggedly chasing me down.  After that, the competition quickly faded.

OnHillEvents usually gives away plaques for first through third overall and I've never gotten one from them.  I've finished in my age group plenty of times but never cracked the top 3.  I figured I'd have a chance at this race (it was fairly small -- maybe 75 runners total for the 10KM).

I was hoping to run fairly strong but I seemed to get winded fairly quickly.  My legs felt a little tired as well -- I don't think I've completely recovered from my half marathon streak.

I ran the first 5K in around 26 minutes, which what I was shooting for.  However, I was already hurting.   The first and second place runners were well ahead of me and me and another guy were running side by side at times.  He pulled ahead of me moments before the turnaround to begin the second 5K but stopped to get a drink of water.  I tried to put some distance on him, but he quickly caught up.

I kept up with him and I was just doing whatever I could to keep up.  I figured I could turn on the jets in the last half mile and hopefully find it in me to pass him (he looked to be in my age group as well).

It was nice seeing the 5K runners (of all levels) and I got to get some encouragement from the 10K racers as well.  The race was small enough, despite a narrow bike trail, that no one's pace was hampered.

Either way, by mile 5 I could tell the third place guy was wavering.  I picked up my pace a bit and hoped that my usual end race result would not happen -- that the guy I was tailing would get a second wind and drop me.

By mile 5.5 I really dug deep and it seemed as I made my way past the runner that he sort of gave up.  He had given me a fight through out the race at any time I came near him but this time, he seemed spent.  I didn't have much either but I forced myself to keep going.

I looked around at mile 6 and he was no where to be seen.  I pushed it to the finish for 3rd overall. 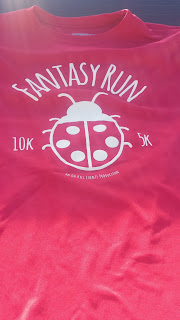 One of the benefits of finishing 3rd overall was that I could grab my award sooner rather than later.  I would've had to wait for the 5 K awards and the 10K age groups up until my age group (45 - 49) which would've taken a long time.

I felt bad for the 4th place finisher.  But I really worked that final half mile and it is a race.

I wound up grabbing a few oranges and some Gatorade after the race and made small talk with a few runners.  I was tempted to go and not even grab my award but I figured I could hold off for 15 - 20 minutes.  I am glad I did.

The race also had a half marathon but it was canceled due to a low turnout.  They did give out medals for finishing, which was nice.  Course support was good, with water at the 1.55 and 3.10 markers.

I paid about $38 for the race.  Expensive (a bit) but I registered late.  The course was a little short in my opinion (the 10 KM turn around was about .02 miles from the finish) and I understand the logistics.  Originally the 10K was going to follow the half for 3.10 before turning around but with the half canceled the race director had everyone just do the 5K, which was fine by me.

The course is just the bike trail. There were a few dog walkers and cyclists and there is of course the Jordan River to look at.  Not the most glamorous course, but it is an honest and flat course.

My performance was -- not too good.  I was hoping to get around 52 minutes or somewhere around there.  It was warm, a slight head wind and my legs felt it starting at mile 3.  It definitely wasn't my day.  I am happy though that I did dig deep and managed to be competitive.

I am happy to have done the race though and it will be a highlight to my year of running Utah.
Posted by Eddie Gaul at 8:03 PM