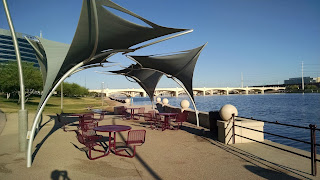 This Week in Running


Well, I have made it to Arizona and am residing near Arizona State University.  I am slowly transitioning into life as an Arizona-ian.

That means I've changed up my runs.  With daytime temperatures in the mid 90's it means I need to get up early and to get my miles in.  Generally I wake up around 6:15 and am out the door within 10 minutes and hit the Tempe Town Lake Trail.

It isn't a bad place to run but totally exposed.  There is one yucky porta-pottie about 2 miles into the run and another set of bathrooms another mile further along the trail.  There are also a few drinking fountains.  I always carry water while I run now.  While the air temperatures are in the low 70's, the sun is pretty intense. 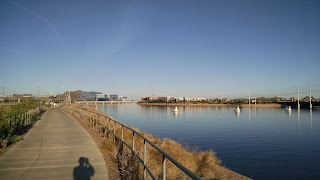 There are some other runners on the trail, but not as many as I thought there'd be.  It is also fairly popular with people using their boats on the river (as I like to call it) and cyclists.  The trail is safe and flat and easy to navigate.  I managed to run 11 miles on it and wasn't bored.  I do, however, miss my Jordan River Bike Trail. 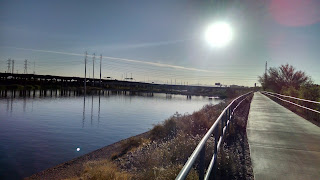 Perks at the New Job 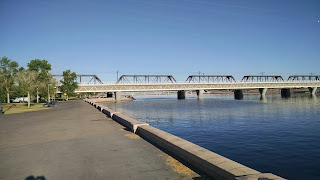 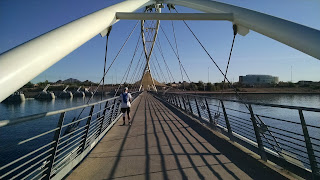 I have started a new job in Chandler, Arizona.  This was the primary reason why I relocated here.  And with it comes many new challenges (like coming up to speed on a new system).  However they do have some nice perks there.  They don't have a lot of junk food there.  Sure they are big on cereal but there isn't much in terms of candy.  They do have sugary drinks but they have some healthy choices there as well.  They have a Coke dispenser where I can put a shot or two of regular soda and chase it with a lot of carbonated water.  That way I get a little bit of sweetness and flavor without overdoing it on the calories.  My last job, they had a ton of candy and I more than took advantage of that. 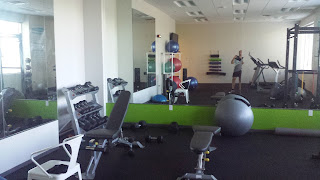 Also they have a gym.  It isn't super huge by any means but it has enough dumbbells, benches, straps and so forth that I can get in a decent workout.  They also have some cardio equipment too.

So basically, I get up early, belt out a few miles in the morning, go to work and to let traffic die down, I use the gym there.  I'll peddle on the bike for about 15 minutes before I do a fairly generic weight workout and what not.  They also have a shower so I can clean up before leaving.  By the time I head out, the place is a ghost town and the freeway back to my brother's place is much more doable.  My commute is nearly double in terms of miles but takes less time then it did when I was in Utah because it is mostly freeway.

Hopefully the double workouts will translate into some weight loss and faster times.