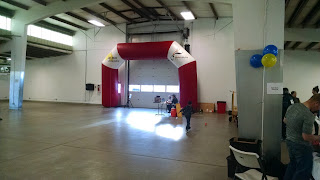 Sometime early this winter OnHillEvents decided to throw together a runner's convention.  It was meant for runners like myself to meet up with race organizers and vendors. Other organizers have had other conventions like this in the past and it is usually combined with a 5K race.

The race was cheap and that was my primary motivation in doing the race.  Also, it was close to me, about 30 minutes north of my house and at a familiar location:  The Legacy Events Center, where I've either run by or had races held in the past.


I rolled in about 40 minutes before the race start.  Josher Hansen, runner and blogger extraordinaire was there handing out bibs.  Judging my the pre-registered list, it looked like it was going to be a small race.

This was a bit of a recycle race.  Since the race was so cheap ($10) you were given a shirt from a previous race.  The pickings were pretty slim for XL sized shirts.  I grabbed a Large shirt that was at best a medium-sized shirt.  It'll go to a friend or something.

I did a little bit of a warm up and chatted up with some of the other runners.  Conditions were slippery.  I looked at the starting area and it looked like a slick sheet of icy snow.  It had been plowed, but part of me wished that they hadn't.

So I did an abbreviated warm-up after being told the rest of the bike trail was slippery.  I had pretty much written the run off as a training run.

I stripped down to my shorts and a medium weight jacket and the race started slightly late, but not a big deal.

I wasn't warmed up and suddenly slipping into 5K pace seemed very painful.  I was gasping for breath and it just felt incredibly hard.

Footing was difficult and I think everyone but the lead guy went out with a bit of caution.  The first quarter mile or so was on the service drive and that was slick.  However, after that you jumped onto a short stretch of bike trail that had been semi-shoveled.  If the rest of the race was like this I would be fine. 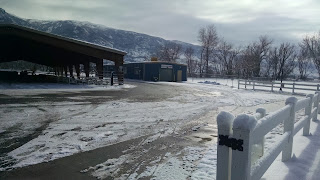 That stretch only last about 100 yards or so before we got to freshly plowed bike trail (the Legacy Bike Trail).  And you know what?  It was smooth sailing.  It looked slippery but it never was.  I realized that I could actually have a decent race.

I clocked the first mile just over 8 minutes.  It hurt a lot and I was laboring hard, but I told myself I had this -- it was just a 5K and I was already 33% done.

I was in a solid 5th place and I'd hold that position for the entire race.  I tried to keep up with the lead woman but she dropped me soon after the turn around, which was an aid station.  I do think they were set up a little early as my Garmin read just shy of 1.5 miles.  Now, I had started inside one of the warehouses at the Events Center so maybe the Garmin had had problems syncing initially, but after some brief conversations with others, it would appear the course might've been short.

I dug deep and on the back section I noticed that there wasn't another male near me and the next competitor was a woman and she was at least a good 30 - 40 seconds behind me.  The next male in front of me was long gone and there was no way I was catching him.  I just needed to hold my pace.

I had a goal of going sub 25 minutes.  Given the footing and a brief stop at an intersection, I had my doubts as to whether it would be doable.  Mile 2 was faster than mile 1 and that gave me confidence.  I just needed to make sure I banked a little bit of time for mile 3 where I'd have the ugly footing again.

I felt like I was dying and I glanced at my Garmin and realized it had me running a sub 8 minute mile.  This gave me a boost as I re-ran the route I had just done.

I was so happy to hit the home stretch.  I did a quick peek to see if anyone was behind me and was satisfied no one was closing in.  I ran in under 25 minutes, which was good given the conditions of the day. 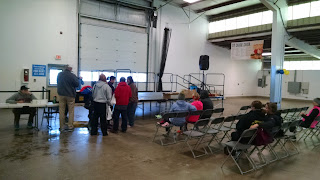 
I grabbed a finisher's medal, which was another recycled medal from the Layton Marathon.  I've run it before and it was a nice trinket / souvenir.

There were some exhibitors at the race and I made small talk with many of them.  I also socialized with some of the other finishers.  Their times were slower than usual as well and they blamed it on the adverse traction.  It was also cold.

The attendance at the conference was pretty light, but the speakers and some of the exhibitors didn't make it until 10.  I hung around for a bit and looked at the speaker schedule and most of them didn't really work for me.  I think if I lived in the area I would've cleaned up and come back for some of them, but I was sort of chilled and wanted food / drink.

Overall, I had a good time and I got what I paid for: a low key, timed 5K race.  I didn't see any race coupons for future races, which I think will help pay for this race when I enter other ones, but I suspect there'll be several good discounts in my future.

I am also happy with my time.  It is another positive race experience despite me not running much at all this week and eating all the wrong food throughout the week.  The 5K is a true test of fitness.  The pain level is so much higher than the longer races but fortunately it is over quicker.
Posted by Eddie Gaul at 1:00 PM