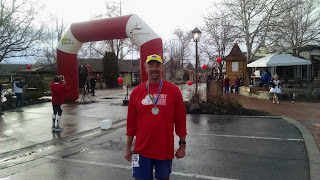 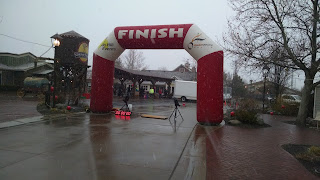 
This past winter I got a discount for a local race called the Candy Heart 5K put on by the fine folks at OnHillEvents.  It is conveniently located about 2 miles south of my house at Gardner Village -- a place where there are lots of trinket, souvenir, and eclectic shops that sell knick knacks and candies.  I think the race is held there to promote the area.  They also dress up the shopping area with seasonal displays that put you in the holiday spirit.

There are several races held here throughout the year and they tend to be low-key races along the Jordan River Bike Trail.  I don't normally run south when I run, so running on this trail is fresh.  I do know the route though and once in a while I do go this way, but for the most part, I always go north.

So while the course isn't super exciting -- it is run along the Jordan River, it is flat, there was a finisher's medal, and a high probability I would place in my age group. 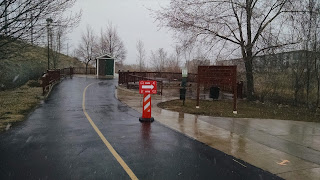 The race started at 9 AM and surprisingly it was snowing a little.  Not a lot and no accumulation but there were some flurries coming down.  Luckily footing along the trail wasn't an issue despite it looking slippery.

I opted to run to the race rather than drive since it was just shy of 2 miles one way.  I loaded up a goody bag with just about anything I could possibly need before and after the race and left after 8 AM.  It was my warm up so I just plodded along and worked out any kinks I had.  I got there around 8:30 - 8:35 and managed to do some dynamic drills, use the bathroom a time or two and before I knew it the race was ready to start. 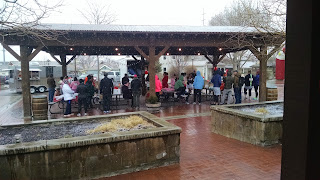 The race was lightly attended.  I don't know what the official numbers were but I would say no more than a 100, which is kind of a bummer.  This was a well done race with a lot of excitement.  Everyone was also dressed in red for Valentine's Day, which was the theme for the race.  There are just so many races and only so many runners.

The race, as usual, started on time.  Most people were pretty shy about lining up at the front so I wasn't hemmed in at all.  However, the start of the race involves several hair pin turns.  You basically have to get out of the outdoor mall and onto the bike trail.  Luckily, this is pretty short lived but the first quarter mile or so involves a lot of hair pin turns, so it was hard to work up a steady pace.  I was also a little concerned about slipping on the wet pavement.  Luckily that wasn't a factor.

I felt pretty good for the first mile and despite already having 2 miles in my legs, I didn't feel tired or dead legged.  However, I felt like I was having a problem getting enough oxygen.  Cursed high-altitude city.  While I am definitely not sick, I do have a little bit of a cough or something in my chest.  Whether it affected me, I am not sure.

The first mile roared by and I was a little crestfallen to see I didn't hit below 7:40.  Unlike last week's 5K, this race is pretty much flat.  So I wasn't going to have to struggle with any hills and unlike last week's race, I didn't have a decline at the start to aid me.

I had been running with a few people but after the first mile, I was mostly running by myself after people had either pulled ahead or I dropped them.  There were some young ones there that had bolted out pretty quickly but faded after a mile.  There were about 4 people in front of me and I was hoping to catch at least one of them (I didn't).

I reached the turn around at exactly 1.55 miles.  I was hurting pretty bad at this point and I knew I wasn't going to break last week's time unless the finish line magically was going to move a bit closer.  The next male was a good minute or two behind me (it was an out and back course) and the top female was closing in on me.

When I hit mile 2 and saw that my watch read 8:06, I was a little surprised.  I felt like I was swimming in quicksand and my breathing was definitely hard.  The lack of oxygen was just making my heart race and I almost felt pukey -- usually a sign that I am going about as fast as I can given the short distance of this race.

It felt good to see the people at the path junctions who were guiding the route and they gave me a huge shout-out.  Also the people still on their way out shouted encouragement at me.  That is one thing nice about out-and-back courses: the support . camaraderie and you can see how far the competition is ahead of you.

Every few hundred yards I'd check my Garmin and wish that I was just a little closer.  I was  hurting bad and the lead girl was right on my tail.  It was a matter of honor (and male ego) for me to stay ahead of her and I was fighting the urge to not just walk.  5Ks are just so painful -- from start to finish.  Luckily the pain level is fairly short lived.

The final .11 miles of the race seemed to be the longest.  I had to zig-zag back into the shopping area and while I didn't have much left, the turns didn't help.

I crossed the finish line in 24:52 and walked off the nausea that had been building up. 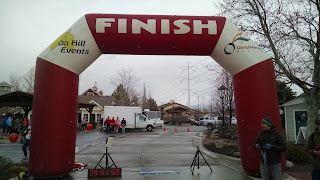 
The nice things about 5Ks is that you generally don't have to wait very long for awards.  I wound up socializing with a few people and within 30 minutes of me finishing, I was getting my award.

Since I didn't drive to the race and had to run home, I didn't grab much post-race food, which consisted of bananas, bread, and of course, Valentine's Day candy.  I had brought a canteen for Gatorade, which I filled up for the run home.

I paid around $30 for the 5K.  Considering I got an accurate 5K, a fun time with awards, a finisher's medal, and a t-shirt (which I am modeling in the cover photo), I am happy with my experience and consider it a good value.

The 5K continues to be a challenging race for me.  I like it in that it is over fairly quickly, but the pain level and the intensity is far higher than any other race I do.  Considering I ran about .04 of a mile longer than I did last week, my time remains fairly consistent.  Hopefully after enough of these 5Ks I can make a real break.
Posted by Eddie Gaul at 12:15 PM