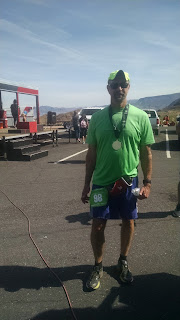 To say that I've wanted to the 6 Tunnels Half Marathon for a long time would be an understatement.  A coworker of mine -- in a former job (or two) pointed me to the race and said I should do it.  Being a Nevadaphile, I knew I had to do it.

The problem was that I lived in Illinois and doing this half marathon would require a flight, rental car and hotel.  Quite an expense to be honest.

Since moving to Utah, every winter when planning my racing schedule I'd remember the race and try to set up plans for it and they would never materialize.  So this winter, I finally ponied up the money and made the reservations.  Date set.


I woke up at 6 AM and ate some Wheaties before the race and sucked down some endurance formula Gatorade.  I knew it was going to be a warm one, with the low for the day in the mid 60's.  With a race time of 8 AM, I had some time to kill.  I hadn't picked up my bib so around 7 AM I descended down to the race pickup site, which was right on the back porch of the Hoover Dam Lodge, where I was staying. 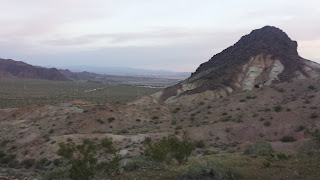 I quickly grabbed my shirt and race stuff and made sure I knew where the start of the race was and headed back up to my room.  It is so nice to be able to stay at the host hotel where the starting line was. 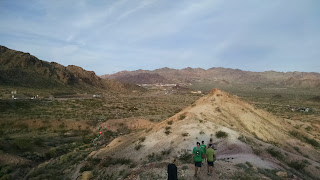 Around 7:30 I made my way back down and made the 5 minute walk to the starting line.  I could already feel the sun blazing.  However, the views of Lake Mead were absolutely stunning.  I spent some time milling about making small talk with people from all over the country that had come into town to race. 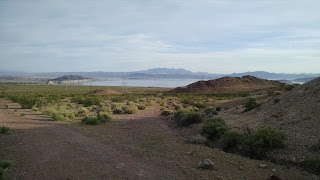 Around 7:55 or so we lined up and promptly at 8 AM with bagpipes playing, we took off north towards Boulder City. 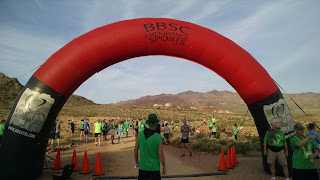 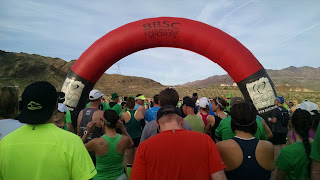 I hadn't studied the course much, but looking at the direction we were going to go, I knew I was in for a climb.  The first 3 miles of this course are a steady grind.  There aren't any back breaking section, per say, but it is just a 2% grade (or more it seemed) up.

The first 2.5 miles are on paved bike trail.  I had expected the race to be entirely on trail, so this was a surprise.

I started off cautiously.  While the hills didn't seem noticeable, I definitely knew we were climbing and my conservative pace seemed a bit fast.  I wasn't too surprised when I saw 9 minute miles appear on my Garmin. 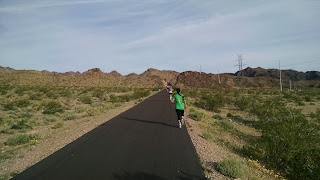 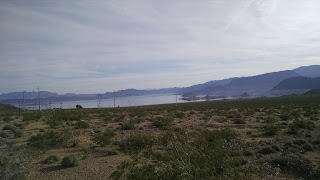 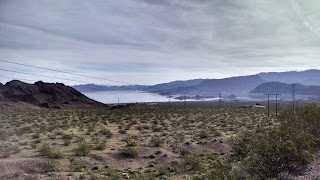 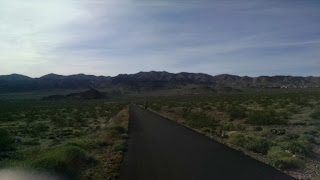 Around mile 2 or so, I started to see the lead pack coming back.  Already?!?!  Around another .75 of a mile, I saw the mile 3 marker and a water stop.  Strange.... I figured we'd make up the .25 of a mile somewhere -- but we didn't.  For a USATF certified course, something was amiss.

I wasn't complaining too much though and I got to enjoy the next 2 miles or so of glorious downhill.  At this point the field had thinned out and I wasn't hemmed in and could run at whatever pace I wanted to.  I had expected a bigger field but there were a bunch of races combined and I never really had a problem managing the group despite being on a wide bike trail.

Around mile 5.5 I came back across the starting line.  And at that point I was fatigued.  The hills had taken a lot out of me and I was very thirsty.  I was carrying my own hydration and greedily drinking at every aid station.  Why was this so hard?

The next 3 miles or so I told myself to simply enjoy the race.  There were so many beautiful views.  Also, the race was shaded at this point and running through the historic train tunnels was a brief respite from the blazing sun as well.

The course at this point was largely downhill or flat.  The trail was well groomed and easy to run on.  There wasn't a technical section of the course at all. 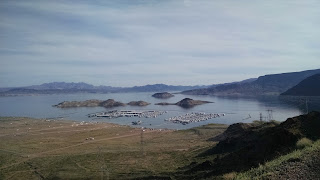 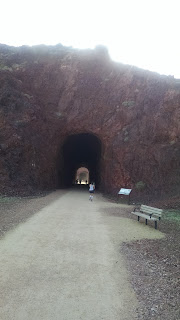 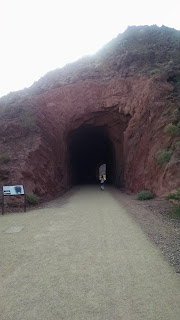 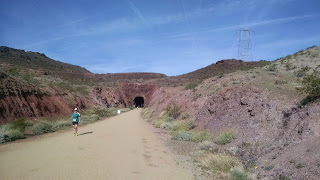 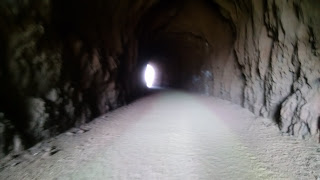 There were 5 railroad tunnels and one bike trail tunnel, so 6 tunnels that you got to run through twice.  Adjusting to the glare was difficult though and running through the tunnel with sunglasses on (like I was) made it hard to see.  But as you can see from the photos, the trail was clear and I never stumbled or anything like that.

By mile 10 or so I finally arrived at Hoover Dam.  This was one of the highlights of the course.  However, getting to the dam was a bit of an adventure.  You basically cross a service drive, descent down a handicap-accessible walkway that was a series of switchbacks, ran across the 5th level parking lot of the dam, ran to the edge of the parking, saw the bridge and then turned around and had to climb back up to the trail.


I really hit the wall at that point.  I had to walk up the stairs because my legs felt like rubber.  I had gone through most of my own hydration and I almost felt "cold".  I know this is a subtle sign of heat stroke.  So at that point I was sort of in survival mode.

I managed to make some ground up during the final 3 mile stretch back but it was a grind.  I was so hot and I just felt woozy.  I had no energy in my legs.  I was getting passed fairly regularly but it seemed a lot of other people were suffering in the heat as well.

I really didn't even have a final push at the end.  I just crossed the finish line, grabbed my medal and tried to find some place shady. 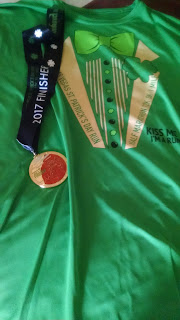 I circled around the finish line for quite a while.  I was so exhausted and I felt sick to my stomach.  I wound up drinking quite a bit of lemonade and water until I felt better.  The downhill section of the race had really pounded my legs and the sun just seemed unrelenting.  After a while, I grabbed some oranges, chips and donut holes to satiate my hunger.

I was glad to have finished but very frustrated with my time.  I knew given the course profile and the weather conditions I wasn't going to run particularly well.

On the other hand, I had just experienced an awesome race.  The views were spectacular (stay tuned for a subsequent post, I plan to post more pictures of the area) and I finally completed something that I have wanted to do for a VERY long time.

I paid a lot of money for the race -- well in advance as well.  So the race wasn't much of a bargain.  But again, considering that it was on federal land and all that, it was worth the price of admission.

The medal was nice as was the shirt.  The organization was good as well.  The aid stations were well supplied with either water or sports drink.  The course was also well marked with volunteers so I was never unsure of where to go.

My only gripe was that the course wasn't accurate.  The mile markers were spot on but mile 3 was short by at least .25 of a mile and it seemed like all the mile markers after that just assumed mile 3 was correct.  Given the weather circumstances, I wasn't complaining too much.

Either way, I would do this race again despite the difficulties.  The course views were just outstanding and I had a great time.
Posted by Eddie Gaul at 7:40 PM