Well, I got in a fair amount of miles this week.  The weather has certainly heated up with running temperatures -- I am finding myself running in the upper 80's.  I don't push the pace that much and just accept the fact that it is going to be difficult and that these efforts will pay dividends down the road and get me acclimated to running in warmer weather.

I also have been having a problem with my knee.  I don't think it is a meniscus thing, but the patella tendon may be rubbing a bit over my knee cap.  It isn't super painful, but it is disconcerting and I suspect if it continues it will get worse.

I am able to put a neoprene wrap around it and after about a third of a mile I hardly notice it.  I am noticing it more when I am at home and am sitting for a while and then get up to do something else.  It is almost like a popping sensation.  Some stretching and movement seems to set it back up.  At this point I am concerned about it.

This coming week I have 2 races.  It's been a while since I've done a 5K and I am looking forward to running in a new part of Nevada I haven't been to before.  Well, I've driven through Spring Creek, but I haven't really run there.  After that, I have a half marathon on Friday night.  It'll be interesting to see how I fare there after spending a week putzing around Nevada.


Half way through the Year

July also marks the point at which I am half way through the year.  In taking stock, I am down in overall mileage, compared to years past.  This isn't too unexpected -- I've been a little on the burned out side and have been battling this knee issue.  I also haven't been banging out marathons -- I've only done one so far this year.

My times, for the most part, are slightly slower than last year.  Not by a huge amount, but none the less slower.

I am racing a little less than last year as well. 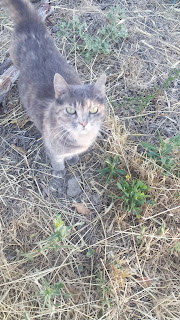 I reported last week that I had found a feral cat on the bike trail and that I had been feeding it.  Well, I finally got around to calling the city and they came and collected her.  I was assured that she'd be put into a nice home.  As a backup, however, I am on the list to adopt her -- so if all else fails, she'll be mine.  I have had cats before but right now I am really enjoying being pet free.

What is sad is that every time I pass by her location, I get a pang of regret.  I really got attached to her as she was super affectionate and was always excited to see me.  It was one of the small highlights of my day.  Who knows, I may wind up taking her in when all is said and done.