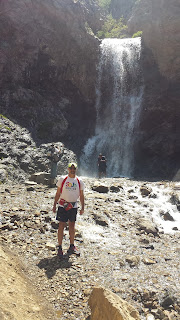 
Well this week was a lot of recovery.  With the temperatures increasing and my knee increasingly less happy I opted to take most of the week off.  It was also ungodly hot in the area.

I did some cross training by hiking to Adams Canyon on Sunday.  That is always a good way to get the heart moving, building some leg strength and getting some cardiovascular work in without the stress of speed work.  I still enjoy driving past people on my way up.


After the race on Tuesday I spent the week eating all the wrong things in Reno.  Shari and I had scored some free stays out there so as part of a 4th of July getaway, we spent most of the week out there relaxing and seeing friends.

My knee was significantly better but as soon as I started to run on it on Friday night, I could feel it act up.  And throughout Saturday I felt it complain once in a while as well.  So the rubbing of what I think is the patella tendon rubbing against my knee cap is directly effected by running.  Go figure.

Hopefully I can muster up the motivation this week to log some miles.  It is just so bloody hot.


Well, who would've guessed?  I am now the owner of a cat, which I named Oreana.  Every time I've driven to Reno from Salt Lake, I'd see the exit for Oreana and Rochester Nevada and figured what a cool name Oreana was.  You don't hear it too often and it sort of has a mysterious vibe to it -- at least to me.

I was joking to Shari that if I had a kid that I'd name it Oreana (presumably if it was a girl) and Midas if it was a boy (another Nevada town).

During our trip to Reno we were concerned about the cat I had found and were worried about its treatment at the shelter.  I knew when I came home on Friday after work that I was going to be the owner of the one I found on the bike trail.

Oreana is a cutie and a total lover and seems to be really good.  I do not think she was a feral, but a cat that was either lost or had escaped.  She seemed right at home in my house.  She isn't spayed and has a full set of claws... so maybe she is a feral.  But she seems too well-adjusted and friendly to humans to be wild.

I am looking for "cat lost" signs on the bike trail every time I go, but for now it is looking like she is mine.

The vet gave her a clean bill of health and she appears to be 3 or 4 years old. 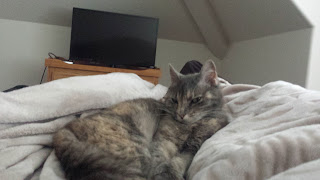 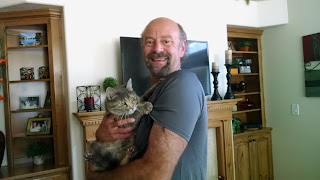 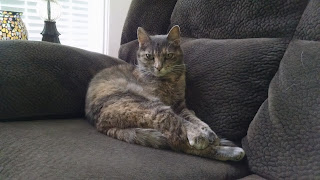