Well this was a pretty frustrating week.  I would've liked to have run more, but the primary reason why I didn't was that the Lamoille Canyon Half totally beat me up.  I was extremely sore afterwards.  And it is also the reason why I only (generally) do about 1 or 2 downhill half marathons a year.

I was also feeling a lot of fatigue on Monday (and throughout the week).  I sense it is because of the warmer temperatures, but it also could be that I am over trained or low on iron.  The previous week(s) before this posting has resulted in similar training... just overall a low volume.  Part of that is okay as I definitely need a break, but part of me wants to keep training.

I really hate this time of year.  The weather isn't conducive to hard training and instead of getting home, changing out of my work clothes and into running clothes and starting a run, I have to sit around for a while before it gets cooler.  Fall can't get here soon enough.

Awards from the Sun Valley Half Marathon

A week or so ago I got a package in the mail.  I had no idea what it was and was shocked to see I had taken 1st in my age group at the Sun Valley Half Marathon.  I had left almost immediately after the race figuring I was completely out of any contention for an age group award.  I was even wondering if they had awards -- the race was just really small.

To be honest, though, it wasn't because any spectacular performance, but just a numbers game: I think I was the only one in the 45 - 49 age division.  Certainly a nice little memento from the race. 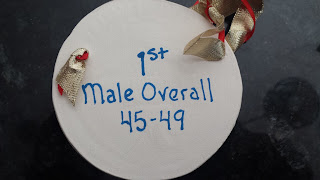 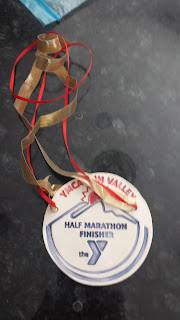 If you've read my weekly recaps, you know that I am always coming across cats on the bike trail.  It is basically a haven for every feral cat in the county.  I've been feeding one since November (and he looks a lot healthier than when I found him).  I also had the pleasure of spending time with Snowball, but he wasn't a feral.  However, he has gone missing for the past month or two.

But I came across another cutie.  He was hanging around near the bike trail and he didn't seem to be a feral.  He was too clean and seemed to be used to humans.  I had some spare food from my other feral and he immediately ate it when I dropped it off.  I wound up coming back down with more food and he was glad to see me and ate the second offering. 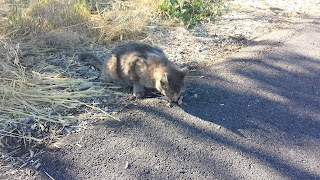 For the best week I've been feeding him and he seems to be hanging out in the same area.  I think he is a feral -- he is fully clawed and has been hunting mice to supplement his food from me.  He is super friendly and always greets me with a hearty meow.  He'll rub his body again me and wants to be played with.  I am hoping to call the city and see if I can get him adopted out.  I am not really in the market for a cat, but I this one I could easily get used to. 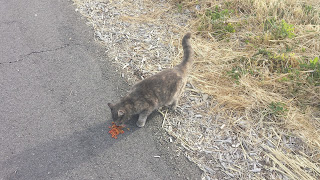 I am holding steady.  I am hovering around 179, which isn't too bad.  If I could only skip out on the all you can buffets, I think I'd be a little further along.  At least I am not blimping up.