This Week in Running

Well, I haven't updated my This Week in Running in nearly 3 weeks.  What's going on, you ask?

Well, not a whole lot.

I had reported in my previous post that I was having some knee problems -- and they haven't gotten much better.  I've been wrapping it up, icing it down, resting, taking anti-inflamatories, researching it.... and it has consistently let me down.

I am getting in a few runs each week and managed to survive the Handcart Half Marathon but I am not getting in any quality training.   Lately, I've been hitting about 15 - 20 miles a week, which I guess isn't too bad but considering I am used to a minimal of 40+, it is a set back.

I believe the patella tendon isn't situated right on my knee cap.  Generally after warming up, my knee settles in and I have very few gripes with it.  Afterwards -- particularly after periods of sitting -- the patella tendon appears to rub against my knee cap, causing an audible popping / creaking sound.  The pain level isn't too bad -- but I know that it can't be good.

So this Tuesday I have a doctor's appointment.  I have a feeling I know what I am going to be told: rest (longer), do what I am doing and potentially physical therapy.  On the outside, if there is something worse going on (torn meniscus for instance) then I can take steps from there.

In some ways I am happy about the injury in that it forces me to take a bit of time off.  I've complained for a while of being overtrained and chronically tired.  Also, it is blazing hot out and running isn't a lot of fun when the temperatures are pushing past the mid 80's.

But on the other hand, it makes me nervous -- how long is this injury going to last?  Is my year over?

In the mean time, I run a little when I can, walk when I can't and I've certainly curtailed some of the extra calories. 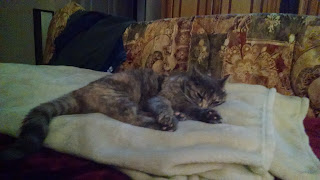 One of the greatest gifts running has given me is the countless people I've helped, met, and run into on my various runs.  But one that is extra special to me is my pet cat, who I found and ultimately rescued off the bike trail.  I have fed the ferals for the past year or so, but this one appears to somehow gotten used to humans.  My guess is she got lost or abandoned and was living on the bike trail.  She and I were instantly bonded when I started feeding her every night...

As you can see from the photo above she has made herself comfortable in our house and is now something that I look forward to interacting with on a daily basis. So far, she's been a great pet and has adjusted well.

I did miss the Glowstick 10K.  I was all set to do it on a Friday night a few weeks ago but when I got home, my knee clearly had other ideas.  It wasn't a terribly expensive race but I hated not attending.  Up until the last hour, I was on the fence about going.  Luckily some friends said it was probably best to rest -- particularly if I was in doubt.  So I sucked it up and went to bed (missing the 11 PM start time).

Right now, I am holding off on entering any more races until this knee situation has settled.  Hopefully the doctor on Tuesday will give me a diagnosis and an estimate as to when I can expect to be at 100% again.