I remember last 4th of July I didn't race.  I was in Elko, NV and I looked longingly at the Spring Creek 4th of July race but I hadn't really prepared for it and just didn't have the motivation to do it.  This year, I decided to make a Nevada trip based upon the race.  So when I got an email reminder and talked to the race director during its sister race (The Nevada Marathon / Lamoille Canyon Half Marathon) and I decided to make a go of it.

Plus, it was a whopping $20 or so for registration -- and it would be something new. 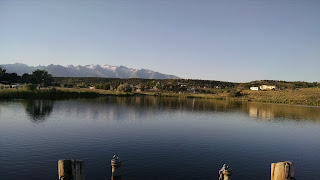 The race is held at the Spring Creek Marina.  I've driven by Spring Creek a dozen times on my way to Lamoille Canyon but never really explored what was there.  I've read a little bit about it but I figured it was just a bit of suburbia south of Elko.

It was about a 25 minute drive to the Marina from the Red Lion and I made it easily.  I was one of the first ones there and grabbed by tank top (which I kind of needed) and bib.

Getting there early gave me a chance to photograph the area and use the bathrooms: 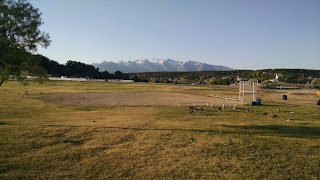 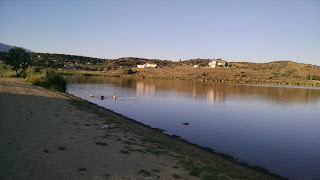 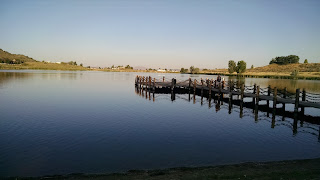 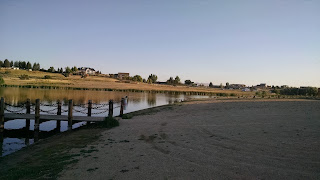 As I killed time, I could see more and more people arrived.  The race director had encouraged people to arrive early but clearly a lot of rookies had shown up.  Unfortunately, the race didn't start until about 7:15 (or so).

I had warmed up at about 6:30 -- and it was already warm.  Mostly I just did about a mile jog to feel like what the initial mile was going to be like.  I also felt the elevation -- Spring Creek sits at about 5500 feet.

Once they had processed everyone, the race started.  I had lined up somewhat in the back.  I wanted to ease into the race and at least not kill myself on the initial climb. 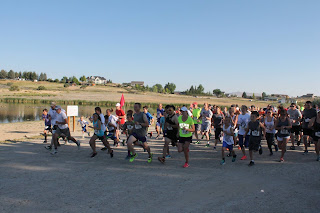 There were a ton of young kids in the race -- and I think that is great.  Most started out way too fast and came to a crashing halt about a third of a mile into the race.

The race starts behind the marina's parking lot, winds up a dirt road to Spring Creek Parkway before heading northwest into the suburban part of the town.  I used the dirt road section to get a sense of how I would be running.  Once I hit the payment and a brief downhill, I used the opportunity to pick up the pace.

The course is an honest one.  It has some rolling hills and while my Garmin says it was net downhill, I felt like it was more of the opposite.  I am not sure how accurate the Garmin really is but it seemed like there were a lot of gentle inclines than declines.

I was trying to find people my age that I had to work off of.  I am a very poor judge of age but tried to keep up with some of the other 40-somethings.

I made it to the first mile marker and saw my watch beep just before it.  It always gives me a sense of confidence in the course being not too long or too short when the mile markers are lined up.

I was working off of another guy, presumably my age (he wasn't) and trying to match pace with him.  He'd pass me and then run up a hill and my more consistent pace would overtake him.  I finally outlasted him and was actually making some gains.  At about 1.5 miles I was hurting but certainly not on my last wind.

At this point, the crowd had thinned out and I was running primarily with a pair of young kids who weren't old enough to have driver's licenses.  I looked behind me and didn't see anyone my age closing in.  So if I could just maintain my pace for another mile or so, I should be in the money for an age group award.

The last part of the race is held on a dirt trail.  There were a few hills here but the footing was easy.  I was really hurting at this point though and I kept looking longingly for the finish line.  Finally it came into view and I couldn't have been happier.

The last bit is on a stretch of grass as you head into the chute that is lined with American flags.

Upon finishing, I grabbed some water and went about socializing with people.  They had bananas and some chips as well.

Looking at my Garmin, I was mildly happy with my time.  The course was a tough one and I felt accurate.  If I had to predict my finish time before the race I would've probably given a range of 24:45 - 25:15.  So I had run pretty much what I expected I would've.

The course was well marked.  Even if I had been in the lead pack, I would've known where to have gone.  The course was interesting as well.  While running through a residential area doesn't sound too terribly exciting, I felt that the terrain varied and occasionally you got a glimpse of the beautiful marina. 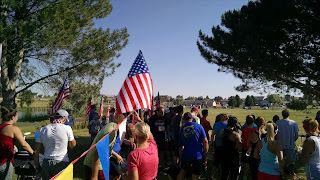 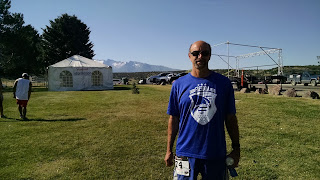 After picking up my ribbon for the age group award (and win) I decided to go for another shake out run.  I probably put in another mile or so (total) but there was some beautiful scenery and well worth the brief excursion.

I liked this race and if my travels take my back to Elko for the 4th of July again, I'll definitely do this race.  It was affordable and I really liked the course.

Here are some final pictures of the Spring Creek area when I did my cool down run: 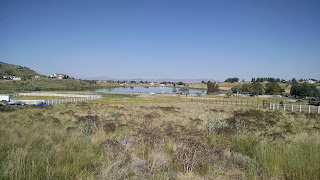 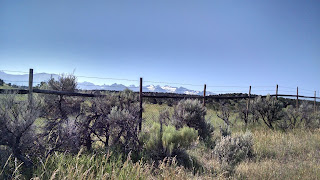 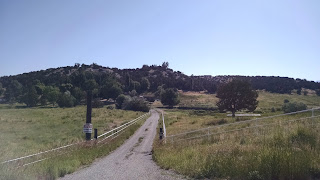 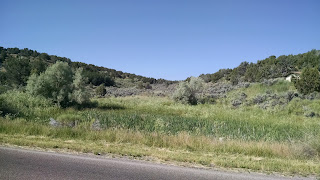 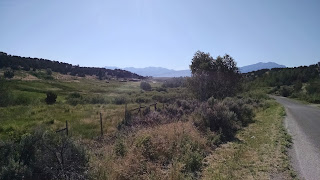 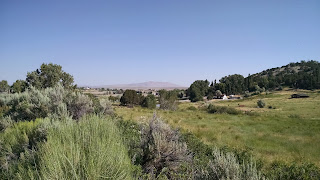