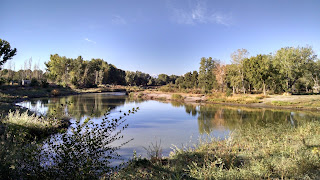 
This week's runs went extremely well.  And I hit the total mileage I wanted to run -- a little more than 50% of what I normally run on a weekly basis, which is about where I want to be 2 weeks from a marathon.

I also had an impromptu race on Tuesday.  It started off as spotting a pair of runners ahead of me.  I was slowly gaining on them but they took a wrong turn on the trail (or were getting off the bike trail).  After a while, I looked over my shoulder and realized they were back on the trail and moving at a fairly good clip.

Not wanting to get passed, and looking for a challenge, I decided to give it all I had in terms of not getting passed -- much like a race.  I wound up keeping a slightly faster pace with them until my turn around -- some 2.5 miles later.

They wound up getting water and my turn around spot too and during that brief intermission, I thanked them for pacing me.  We had a good laugh and I had them pace me on the way back.  I didn't think I had much left and told them I'd probably drop out after a mile or so.

But you know what?  I managed to hang with them for a mile and then eventually pass them and take my 10K race pace all the way back to my quitting point.

So my average workout became much more.  It really helps to have training partners -- even for race simulations.


This coming Sunday I'll be running, I think marathon #25(ish).  I've lost count and to be honest the number doesn't really concern me.  I am more concerned about knocking off another state (California) then the total number I've run.

I don't have any huge goals for the marathon, other than to run as well as I can.  I don't think the course is PR worthy -- it has some rolling hills and the elevation will certainly take its toll on me. So long as I am not doing a death march at the end, I'll call the race a success.

I am doing the race primarily because it is within driving distance, I can claim California off my state's list, Tahoe is incredibly beautiful and there are casinos and buffets near by.  Score for me. 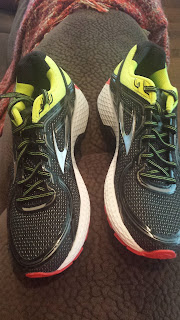 A few weeks ago I reported that I had a pair of Brooks Adrenaline shoes that lasted exactly 4 days before I discovered they were falling apart.

I did write to their customer service department and they offered to send me a new pair of shoes gratis.  They even responded when I posted on Twitter as well.  Talk about customer service.

I do hope, however, they have corrected their factory problems.  Their shoes, of late, have not lived up to their usual durability. 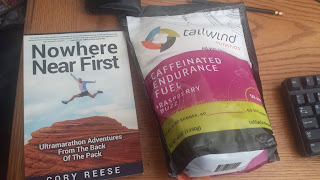 I don't normally read a lot of books.  I should read more, but as I've gotten older, I have noticed that my concentration has gotten really bad (thanks Internet).  I used to read voraciously and put down a book or two a week.

I have read Fast Cory's blog for a while and I have always been impressed with his enthusiasm, his simple love of running, and his ability to just go nuts and defy the odds.  The fact that he (or anyone) can run a 100 miles without dying astounds me.

As a fellow Utahn, I can also appreciate his love for the state.  His photos are jaw dropping. He has done a lot of the trails I have up north here and I can only dream of seeing some of the sites he has seen down south.

His book is an easy read, cataloging his start into the ultramarathon "business".  He also recaps many of his races (as well as his early races), the challenges he faced, and how he overcame them.

I have no desire to run an ultra, but his love for running is contagious.  I know after reading an article of his, I've laced up and run one too many mile.

He also has a very positive point of view in terms of racing and doing one's best.  I found the book very enjoyable and if you are looking for a light read by a fellow runner, pick up his book.  He is also the one that got me hooked on Tailwind.