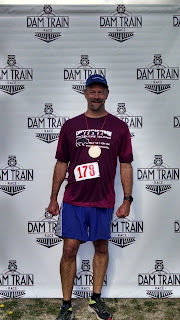 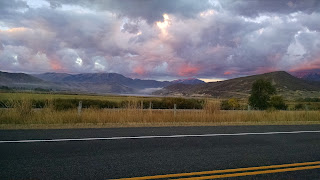 
Last year, I ran the Dam 15 Mile Race in the middle of summer.  I knew it was a trail race but I didn't know much about the course or the area (except it was pretty) and I decided not to bring my camera on the trail. I just didn't want to break it or have to worry about it if the trail was super technical.

Since then, I have regretted it.  Always, in the back of my mind, I thought to myself, "I've got to make it back out there and get some snaps of the course".  And every time I thought about going out there, I punted on the hour drive.

Well, the inaugural Dam Train Run came out this year.  I needed to get in a final 8 mile long run before next weekend's marathon, so I figured why not do this race, take some pictures of the course and have some fun.

Plus, the race was only $30 (+$5 more with the service charge) and so a plan was hatched and I made the roughly hour drive out to Soldier Hollow, just outside of Midway Utah.

The concept of the race was pretty simple.  Show up around 7:30, board a train which would take you to the starting line in about 30 minutes and try to beat the train back to the finish line (where the train picked you up).

The train isn't terribly fast and it did give you a generous start:  the trail that you are running on crosses the rail road tracks at about mile 1, so the train had to be idle until the last person crossed the trail.  So I figured I had a good 20 - 30 minutes start.

I picked up my bib, hat, and used the bathrooms.  They didn't have many at the start but I had time to kill and the line did eventually get me to the restroom.

Around 7:30 the train pulled into the station and you boarded it, along with a few hundred other runners (actually a pretty good turnout). 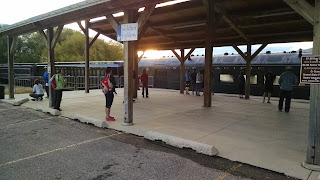 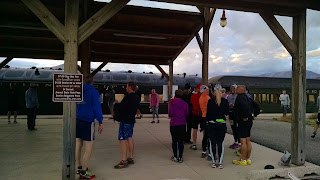 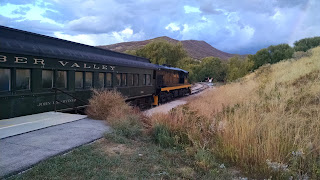 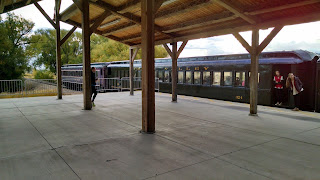 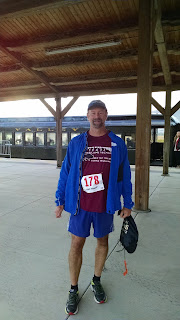 The train then does a 30 minute trip to the start line.  The rail road track pretty much hugs the western shores of the Deer Creek Reservoir.  At the end, you are dumped off unceremoniously at the Deer Creek Dam -- hence the name of the race. 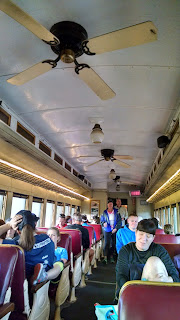 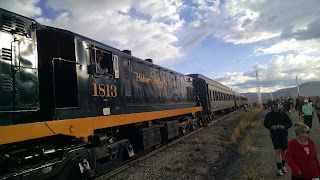 The train had bathrooms, which I used, but it was older than anything I've ever seen.  In fact the inside of the train was kind of in disrepair but still had a nostalgic feeling to it.  If you are into old trains, this is a must do and resembled my train ride in Ely, NV and Virginia City.

After disembarking, I wound up walking around, socialized a bit and took a few pictures of the gorgeous mountain scenery.  Despite all the logistics of lugging people up there, the race started on time at 9 AM. 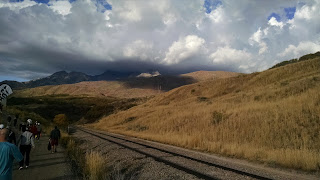 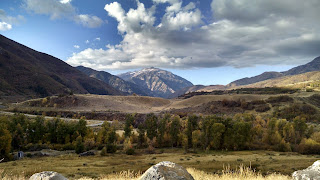 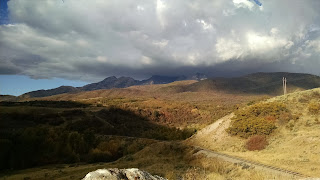 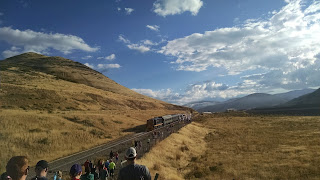 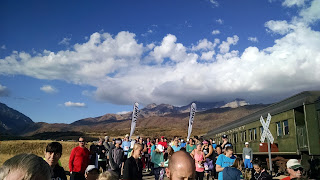 The race is run on a dirt path, suitable for dirt biking and trail running.  The trail is in good shape and wasn't technical by any means.  There are a few rocks on it, but footing was not a concern.  The rolling hills and the slightly higher altitude than Salt Lake were, however.  Almost right away I was sucking wind and my legs felt heavy.  I suspect that was from the altitude (about 5300) and the loose traction.  I do virtually no trail running so this was a new dimension.

The first half mile was congested but eventually it gave way and people settled into their pace.  I was easily able to run the pace I wanted to within a few minutes.

I was battling it out with a couple of guys.  On the flats and downhills I could hold a decent pace and pass them. However, on the up hills, which are my weakness, they would inevitably catch up and pass me. This repeated itself through most of the race.

I tried to enjoy the scenery but this trail was work.  Sometimes I found myself moving pretty good and then a few minutes later I was cursing the running gods because of a hill.  Also, the sun was out in force.  While I've certainly run in worse temperatures, I was warm and soon dripping copious amounts of sweat.

They had two aid stations, both serving water.  I had thought about carrying my own hydration (and saw others had) but I felt like I had enough.  I was already bogged down with my phone, which I carried in my hand.  I didn't really stop, per say, to take pictures, but I took a bunch while running and they actually turned out pretty good. 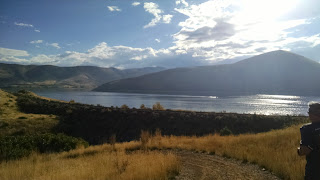 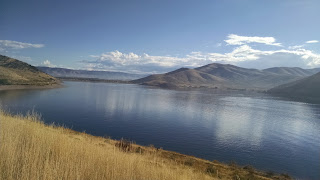 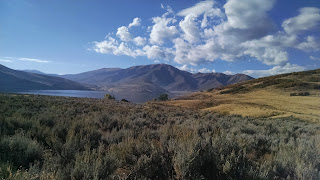 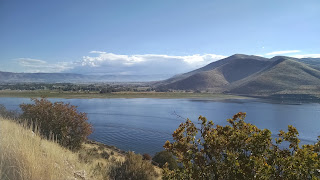 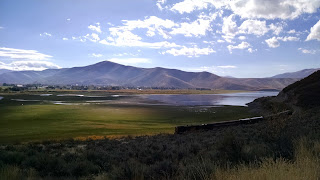 Around mile 4, I turned around and spotted the train's headlight in the distance coming around a corner.  At that point I knew it was going to be iffy as to whether I was going to beat it.  I kept going as fast as I could but my legs and will were not cooperating.  At one point, I was shambling up a hill just because I was so gassed.

Around mile 5, I turned around fearfully and saw that it was much closer.  Unless I got a second wind, the train was going to beat me.

The last .75 of a mile is primarily downhill.  I had saved some of my energy for this and crushed it on the downhill section.  I had been with a group of guys and my burst gave me the ability to pull well ahead of them.

Unfortunately, about 20 seconds before I crossed the finish line the train came to a stop at the finish.  So I am not quite faster than a speeding train. 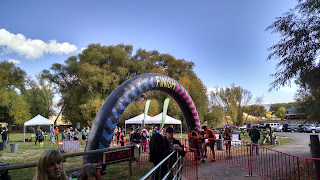 I was so happy to see the finish, but at the same time a bit dejected that I hadn't quite beat the train.  Close but no cigar as they say.

They had water at the finish line and some Kashi Bars.  I am deathly allergic to them, so they aren't any good to me.  Luckily, in my bag I had a Power Bar and a pretty full 32 ounce Powerade.  That really helped.  I was hoping they would have fruit or bread (once of the aid stations did) but it was slim pickings at the finish line.

The finisher's award was a nice wood / cork finisher's medal.  There were  no age group awards, but they did have some very nice raffle prizes, which I did not win. 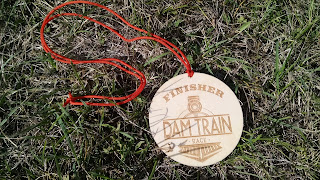 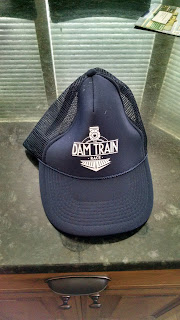 I wound up socializing for a bit and enjoying the day (it was absolutely a perfect fall day).  The walk back to my car was long (at least half a mile).  They had some volunteers shuttling people but I found someone to talk to and made the most of it on my walk.

Overall I really liked this race.  I got a cool train ride, a supported course / run, and overall good experience.  I think if I had paid more money I would've been disappointed, but for $30 it was a good deal.  Plus, I've never run a 12K race before, so this was an instant personal record.

If my schedule permits, I'd do this race again.
Posted by Eddie Gaul at 2:32 PM