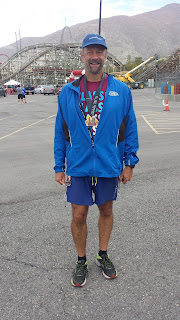 Last spring I ran the Lagoon Half Marathon and ran extremely well.  Since then, I have kept my eye out for a second annual race but was sort of shocked to not see it on the race agenda.  I talked to the race director and he said he was holding it off until the fall (there was a 2015 fall edition last year but it was lightly attended and consequently canceled).

So this week, I decided to step up and run the 10K version.  I signed up at the last minute and figured that my marathon weary legs would be able to at least get me through a 10K.

The whole concept of this race is that you do a a few miles of whatever distance you are doing (5K / 10K or half marathon) outside northern Utah's premiere amusement park and then do the final 2 miles in the park.  The amusement is decked out in Halloween stuff so it adds a bit of season interest to the race.  Right now the race calendar is packed with Halloween-themed races, but having this one run in the amusement park makes it a big draw.

I woke up at about 5:30 and discovered I had a cold.  Not a raging cold by any means, but a cold none the less.  I was up off and on throughout the night clearing my throat and worrying if I was getting a temperature.  Shari has a cold and I suspect I have caught a tiny bit of it.

Feeling tired from last weekend's marathon plus this cold didn't bode well for a race, but I had paid for it, and even if I had to walk through it I was going to do it (wasn't going to throw away nearly $45).

So I ate a Powerbar for breakfast, grabbed my supplies and made the 30 minute drive to Farmington, Utah - a straight shot up I-15.

I arrived nearly an hour before the race and was greeted with a LONG line to get one's bib.  And it was crawling at a snail's pace.  Luckily for me, the 10K was the last race to start.  But suffice to say I had to wait in 2 lines -- one to get my bib # since I was a late registrar and another line just to get my bib.  If I was running the half, I would've missed the start. 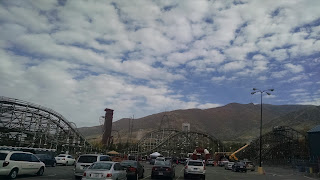 The race started on time and my goal was just to go out fairly easy.  The first mile is through the amusement park's parking lot.  Less than a half mile later, you are dropped onto a bike trail that wraps around the backside of the park.  At this time of year, it is absolutely stunning with the fall colors.

The race was lightly attended (probably less than a hundred for the 10K) so I was able to get off to a good start.

I ran the first mile right on target -- 8:30.  It felt a little fast but it was a pace I felt I could hold on a good day.  The course was flat at this point and I could feel a little tightness in my chest and fatigue in my legs.

Mile 2, the "fun" starts.  The race is progressively uphill.  I had studied the course beforehand and knew they were coming but it is always tough dealing with them.  Everyone's pace dropped dramatically.

Looking at the race director's course map and where I turned around on my Garmin, I can see why the course was short.  I think we were supposed to run about another .25 of a mile down the road.  But they had the turn around sign at the 2 mile mark.

Mile 3 was fun.  I was able to run downhill all the hills I had just run up!  I was able to find a bit of a second gear, although I was clearly hurting.  Note to self: running a fast 10K after a brutal marathon 6 days prior is probably not a good idea.

Mile 4 brought me back to the amusement park's entrance.  I was a little worried at this point because I remember last year that it was a bit hazy as to where to run in the park.  Some of the volunteers seemed a little put off or confused as to where to run.

Luckily I had a woman who I was slowing making ground on in front of me.  The course was well marked this time and there was only a section or two where I wasn't quite sure where to go.

It was hard to maintain any sort of pace here.  The pavement was a little uneven and there was a lot of turns.  I was so confused as to where I was in regards to the park's entrance.

The place was beautiful though.  The trees were largely yellow and a lot of the decor was Halloween themed.  There also was the occasional dry ice spot too.

I was pretty fatigued by mile 5 and luckily no was pursuing me.  From what I could tell, I was going to finish in the top 15 or so and I hadn't seen too many guys my age.  I was thrilled to cross the finish line and my time wasn't too unexpected given the way I felt. 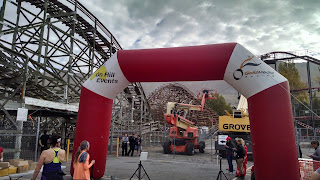 I grabbed some water and chatted up a few people before heading to my car.  I was pretty cold and I needed to warm up.  I changed shirts and headed back to the race start in hopes that the awards would start.

They did the 5K awards fairly quickly but the 10K had to wait for a Halloween costume contest.  Finally, the 10K times were messed up.  They had clocked me at 37:15, which is about the time I probably went through the 4 mile mark (the 4 mile marker is back near the start of the race).  So after an agonizing 90 minutes from the time I finished, I managed to snag first in my age group (believe me, I was tempted to leave).  Luckily I was recording my time on my Garmin as it sort of became "I trust you" in correcting my time.

I paid about $45 for the race, which isn't too bad considering I was last minute.  They had fruit, peanut butter sandwiches, Powerade, water and Fat Boy ice cream sandwiches.

I didn't know anyone there so it was kind of a lonely experience, but generally speaking, runners are a social group and it wasn't too hard to strike up a conversation.

My time, was a bit disappointing, but given the nature of the course and the fact that I was coming in fairly tired (and sick), wasn't unexpected.  Also, the final 2 miles was hard to generate any speed.  You had to constantly be on your toes as far as where to turn and when -- and you were turning or rounding a corner every minute. 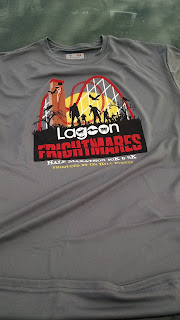