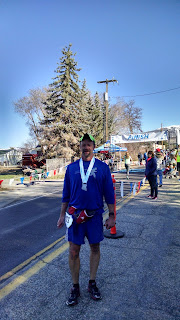 Since I had paid about $100 (or so) early in the year to sign up for a series of races, today I had a half marathon which was part of the Winter Striders Race Circuit. This series is designed to get you trained and ready for their signature event, the Ogden Marathon (either the full or half).  I have already completed the 5K, 10K and 10 Mile so this weekend I had the half marathon.

Faithful readers may recall that I did this race last year and had a phenomenal race in terms of time.  I had hopes that given the downhill nature of the course and perfect weather, I could at least crack 1:50 again. 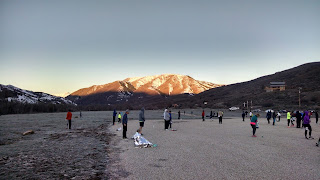 The race started at 7:30 AM and required that I be in Eden Utah -- a bucolic little farming area just west of Ogden by 6:15 AM.  That meant about an hour and ten minute drive to Ogden and then a dark climb through a canyon to the little city nestled in a valley.

Last year I had to park quite a ways from the race site but this year I was there fairly early and had no problems getting a spot close to the finish line.  I also remember a stressful line to get my bib, but this year it was easy in -- easy out.

I also remember last year having my bladder nearly burst from the long drive -- but I didn't have that experience this year and there were plenty of bathrooms at the pick-up area.

I boarded a school bus and arrived at the race site just shy of 7 AM.  It gave me plenty of time to use the restroom (I was on the second bus) and get my stuff settled.  I am just glad it was only a 30 minute wait as it was fairly chilly up there.  I had brought warm clothes, so I was fine, but I'd hate to be up there for 90 minutes. 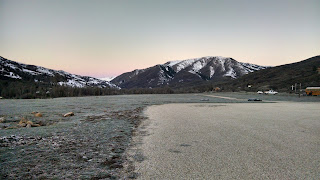 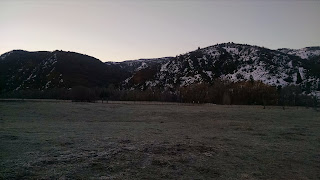 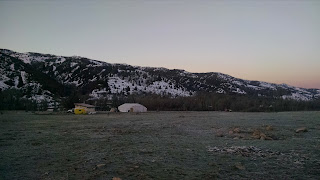 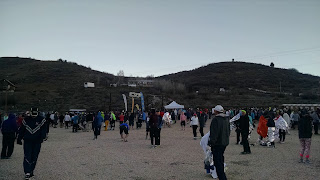 The race started promptly at 7:30 and off we went, basically following the first 13 miles of the Ogden Half Marathon (there are some differences, however, particularly in the middle miles).

The first 5 miles (or so) are primarily downhill.  It isn't a crazy downhill but definitely enough to let you get off to a good start.  This is also the most beautiful part of the trail.  You are running along the South Fork Ogden River, which is just bursting with energy at this time of year.  There also were some small water falls dumping snow into the river as well.  The course isn't closed to traffic but it is watched over by the sheriff's department.  I really wish the entire course was like this. 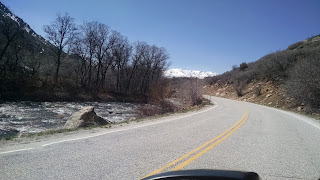 The next few miles are pretty much flat.  I really didn't miss the hills because I was still feeling good.  It also helped that I knew the course but I was sort of worried that I had gone out too fast and that I'd pay the price.

Around mile 9 I figured I had.  At this point the course becomes semi hilly with some rolling hills.  Not many of them are "terrible" but they will make the going tougher.  Also I was getting passed quite a bit, which made me, of course, irritated.

I had nursed a gel starting at about mile 7 but that didn't seem to help.  I just had a hard time getting enough oxygen in (note the elevation is just around 5000).  It took everything I had to really push the pace and part of me sort of wanted to give up.

The final 5K took a lot of effort.  Seeing my splits after the race makes me realize it wasn't a marathon shuffle but it was a real struggle both physically and mentally.  I had hopes dancing in my head that I'd be able to hit 1:48 again like last year but the final miles took it all out of me.

I was never more happy -- and exhausted to cross the finish line. 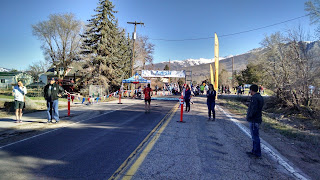 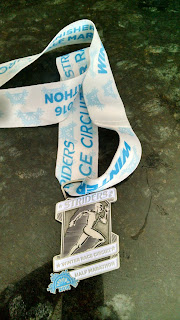 There isn't a whole lot to conclude on this one.  Something felt a little off today and the final 5 miles were a true struggle for me.  My legs, for the most part, felt fine, but I just couldn't get enough oxygen in, it seems.  I also think the rolling hills got the best of me.

I also was struggling with a bit of runner's knee.  This was bugging me at the start but quickly mellowed out.  However, after the race, the left one was bothering me significantly more than the right one (the left had been fine previously too).

Compared to last year, my splits are pretty close to one another.  I just died in the final stretch and it wasn't my day.

After the race, I recovered and got some pictures of the finish line area and made small talk with whomever I encountered.  I grabbed some food, which consisted of coffee, water / Gatorade donuts, oranges, bananas and cliff bars -- the usual stuff for a Winter Striders Race.

Packet pickup was a lot less stressful this year, but there were still lines 10+ deep when the race started for the bathrooms.   They had a bunch of them, but dropping nearly everyone off at 7 am didn't allow my staggering of the usage.  Also, you are in the middle of a field so there isn't really anywhere a guy can go discretely except in the potties.

Course support was good, as usual.  Plenty of water stops (about every 2 miles starting at mile 3) and the mile markers were pretty much spot on.  There were porta-potties at each of the stops as well.

Overall, I like this course -- I just wish I had done better.  The scenery is gorgeous and if you have never been to Eden / Huntsville, you are truly missing out some epic scenery.