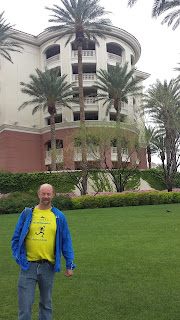 As usual, I like to capture my thoughts and experiences after any road trip and the trip to Summerlin for the Summerlin Half Marathon is going to be no exception.  I mostly write these so that I have something to remember my trips by and some people do find them interesting (I think).

There won't be any racing recaps or running stories.  So if you are looking for that, this is probably an article you'll want to skip.

Shari and I left the homestead around 7:30 in the morning.  I was hoping to hit the road a bit earlier but cat issues and last minute packing delayed us a bit.  Not the end of the world, since Saturday morning traffic is no big deal and we were heading away from the city.

The trip down south was fairly uneventful.  I just made the trip twice since the start of the year and I don't think traveling down I-15 is terribly exciting.

Around 4.5 hours later we arrived in Mesquite.  Normally we go to the Virgin River Casino for their breakfast buffet but I knew that the Casablanca Buffet was a lot quieter and easier to get food.  I also had $5 off so that meant we'd be eating for about $15.

Initially neither one of us were terribly hungry and we started gambling.  A guy overheard us talking and was like, if you are planning on eating you better get in now because the buffet closes for lunch in about 20 minutes.  We certainly didn't want to have to kill another hour so we hustled over to the buffet.  Suffice to say, we were the last to pay and I managed to get a plate or two of hot food before they started taking food away.  I didn't do a huge gorge session on account I had a race the next day, but I certainly ate pretty well.

We gambled a bit and I pretty much broke even and Shari wasn't winning anything.  We spent about an hour in there to make sure our food settled before heading to Vegas.

About 80 minutes later I made my way to the Red Rock Casino and picked up my Summerlin Half Marathon shirt and bib.  Simple easy in and easy out.  We talked about gambling at the Red Rock but neither of us has ever had any luck there so we headed over to the Suncoast.  I've had good luck over there in the past as well as Shari.

I wound up killing quite a while in there while Shari's luck continued to go sour.  I wound up getting a good 30 minutes of play (if not more) on $20 on a Multi-Strike Video Poker.

After a while we decided to head on over to our hotel at the Rampart.  We had gotten a nice deal from them $99 a night plus a bunch of coupons.  It turned out to be the best deal in the area.  We've also wanted to spend the night at the Rampart for a while.  It is truly a beautiful hotel with some amazing grounds.

As I checked in, I noticed that the woman checking us in was Korean.  I immediately began quizzing her on various words and Korean trivia, since I am a big fan of the Reply 1988 series (as well as Korean pop music).  She was pretty impressed with my knowledge and I asked for a translation or two.  One word I've heard a lot is "cheep-paw" or at least that is my understanding of how it is pronounced.  She blushed when I said it and I was like, "What? What does it mean?"

She didn't want to tell me what it meant until I pressed further.  She finally told me it meant a 4-letter word for excrement.  I think I've missed pronounced the word as I don't think that's the word the songs I hear is using.

We wound up gambling somewhat late but neither one of us had much luck.  We had some free play as well but that didn't really get us anything.  The Rampart definitely has refreshed their slot machines and modernized the casino (it seemed bigger) but I wouldn't describe the slots as loose.

We wound up eating an Irish pub.  I certainly didn't want a buffet before a morning race and the pub seemed to work offering simple food at a decent price.  We also had a $10 off food voucher, which certainly help put a dent in the bill.  I had a simple veggie burger with fries.

I slept poorly.  I think I was overstimulated and had a bit of anxiety over the morning's race.  The room was also pretty warm.  If I slept more than 4 hours I would be surprised.

In the morning, I ran the Summerlin Half Marathon, which you can read about here.

By the time I made it back to the room it was about 10 am and I was pretty hungry.  The rooms at the Rampart are spacious and they have a wonderful shower.  They certainly don't have any flow restrictors and it was nice to relax.

I was starving and so since I had a two-for-one buffet pass we opted to hit the buffet at the Rampart.  For $18 it was a bit on the pricey side.  But they have good food there and it was convenient.

We wound up using our second day's free play allotment and I wound up getting slightly lucky on a few machines but mostly break even or was down a few bucks.

We've always been curious about living in Summerlin so we had done a bit of research and decided to go looking at model homes.  Note: I am NOT moving.  Just looking and seeing what I could get within a certain price range.  The houses we looked at were out of the range I was interested in but they had some stunning views of the strip: 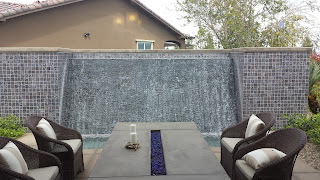 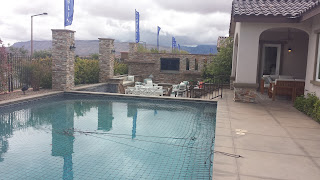 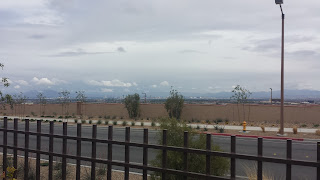 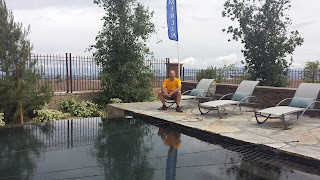 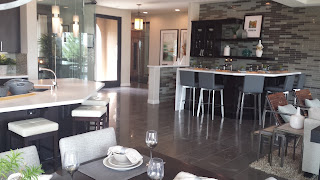 After visiting the houses I wanted to hit the pool at the Rampart.  Again, I can't stress how nice the grounds are at the Rampart.  It is like being in a tropical paradise and their pool is also worth seeing.  Being that it was spring there weren't many people there.  It was nice to relax in the sauna for a while: 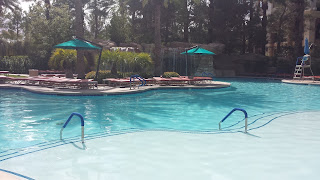 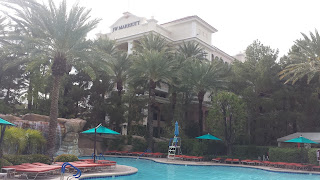 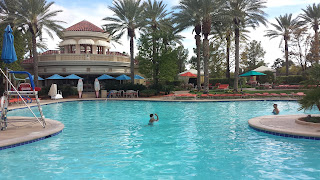 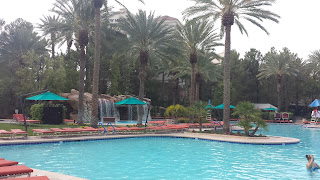 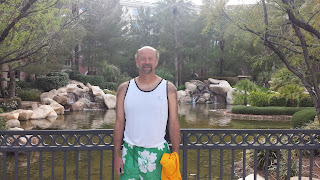 After cleaning up we decided to head on over to the Red Rock Resort.  We had a 2-for-1 buffet pass there.  We weren't terribly hungry upon arriving so we gambled a bit.  I was down about $50 but managed to get a lucky bonus round on a Leprechaun game that brought me back to even.

Dinner was passable and I actually really well -- especially considering we were eating at half price.

We checked out of the Rampart and I actually slept wonderfully!  I think I was out the minute I put my head on the pillow and stayed asleep most of the night (I tend to wake up multiple times at night).

We had tried to figure out where to eat most of the trip using coupons from MyVegas or what not.  Monday had left us wondering what to do.  We thought about going down to the Strip to eat, but now that they are charging for parking, we decided we didn't want to deal with the hassle.

We had eaten for cheap at the Suncoast before and decided to eat there, since it was right next door to the Rampart.  It was about $7 a person.  We toyed around with gambling for 300 points in order to "earn" a breakfast buffet, but we were hungry and after playing a bit, I realized it was going to take a while to get the points.  I wasn't having much luck and I didn't want to further throw away money.

We got there at the tail end of breakfast and had to wait about 30 minutes before they switched over to lunch.  They have an awesome make your own Mongolian plate which is the best thing on the menu: 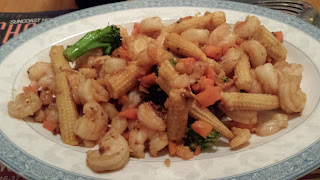 Again, for $7, this is probably the best buffet in town.

We gambled a bit more before hitting the road.

I had a free weeknight room at the Casablanca in Mesquite.  It helps to break up the trip by spending a night there.  It is only 4.5 hours back home instead of 5.5.  It just seems a lot shorter.

There is a Sun City development in Mesquite and I've talked about wanting to retire there.  I am still a good 15 years from retirement, but we were curious what we could get.

Houses were definitely a lot cheaper, but certainly less spectacular.

By the time we finished checking out the houses, we were able to check in at the Casablanca.  After unpacking, I headed out to the pool for an hour-long sauna / swim.  Casablanca has a beautiful pool but their sauna's jets are just weak. 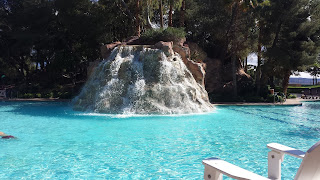 We gambled a bit and I wound up getting a lot of play on Britney Spears Slot Machine.  This game seems give you a lot of play for your money but you don't win very much.  I've seen one guy win a lot, but for me, it is mostly a few bucks here and there.  We did try $50 in a Rising Dragon slot machine at max bet and got nothing on it.

We were both buffet'd out so we decided to eat the cafe at the Casablanca.  They have epic proportions and also a huge Chinese menu.  I wound up getting some shrimp and noodles.  I wasn't a huge fan of it (I was expecting something different) but the food was good and the service was attentive.  No wonder there is usually a line there. 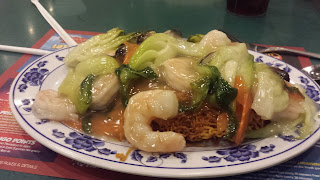 We gambled a bit more, but neither one of us were having much luck so we called it a night.

We got up early.  The best time to leave Mesquite is early in the morning.  With a 4.5 hour drive, it basically gets you back into Salt Lake City before the rush hour hits.

I had a 2-for-1 buffet at the Virgin River so we ate there.  We practically had the place to ourselves.  Normally, on the weekends, the Virgin River can be a pain to get food because the line for food is one long line -- you can't just interject yourself at the end for say cheese blintzes.

The lack of crowd also made it super easy to get an omelette... 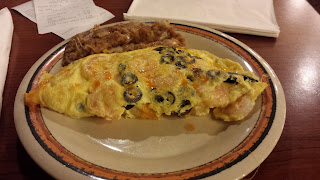 I wound up playing my free play at the Virgin River and Britney Spears gave me a lot of play time, but I never won anything.  I also played some Wonder Woman, which was fun but like Britney, she'll give you some time to play but rarely pays off.

The trip home was pretty uneventful and we arrived home just a hair before 2:30, which left the rest of the day to unpack, cleanup and get a run in.

Overall, it was a fun trip.  We got a lot of bargains for food and our stay, so that helped.  Gambling, as usual, it was kind of a bust for both of us.  The highlight of the trip was when I won $81 on a bonus round on Fu Dao Le at the Suncoast.

Running a half marathon in one of my favorite cities made this trip really worth while and I think we both thoroughly enjoyed it.  It was a nice experience to stay off the strip as well and enjoy the "other side" of Vegas.