The Winter Stiders Circuit 30K race culminates their winter series.  Faithful readers know that around Christmas time I ponied up about a $100 for 5 races: a 5K, 10K, 10M, Half Marathon and the 30K. These races are set up to prepare you for the Ogden Full or Half Marathon.

In years past I've done various segments of the race, but I never did all the races in a year.  So despite some threatening weather I knew I had to complete the series.

I didn't have a whole lot of goals for this race.  Having a marathon in about 8 days I knew it wasn't my brightest idea to race 18 miles.  So while time is always important to me, I knew I wasn't going to be redlining it.  I ran the race last year in 2:40.  So I was sort of hoping that I could come in around that time range.

The course was slightly different from last year's edition.  Last year, the race started in Eden Park but being that they are offering a "short" course (about 12.5 miles) for those training for the half marathon and the long course (for those doing the full).  Unfortunately, I think they didn't adjust the course accordingly to make it a true 30K (more like 29K).

I rolled in just after 6:30 AM for the 7:30 start.  I grabbed my bib and an awesome parking spot.  I am glad I got there when I did because the school doesn't have a large parking lot but there was plenty of street parking.  I cycled through the bathrooms a time or two and debated on what to wear.

The weather had predicted storms rolling in around 7 AM.  From the looks of the street it had just rained and the race director told me about an hour before I had gotten there they were talking about canceling the race.

I had brought clothing for just about any weather condition and I wound up going with shorts and a long sleeved tech shirt.  I had a Glad garbage bag in my pocket "just in case" and I had my 28 ounce running belt -- which I am glad I took.

The race started at 7 AM and I took off running north.  It was crowded at the start.  They had told us all to run on the bike trail which is about 8 feet wide.  I wasn't in any hurry and at times I had to move around people, but within a mile I could run at my own pace.

I remembered a lot of the course from last year and soon the threat of rain was pretty much gone.  The clouds gave way to some sun.  While there was a stiff breeze / wind from the south and southwest, I was pretty warm.  Suddenly, I was praying for the rain.

I didn't feel the hills this week I was definitely soaking up the scenery.  Eden is a really nice place to run but the roads tend to be banked.  So it can lead to some IT-band problems.  Also I kept getting tiny pebbles in my shoes.  I think my shoes are worn down or have holes in them, so despite my best efforts, they let the little buggers in.  I had to stop about twice to empty them, losing precious seconds.

For the most part I was holding on to my low 9-minute per mile pace despite the wind and not a lot of spring in my legs.

I wound up feeling pretty good at the 13 mile mark, but I was really worried if I was going to crash and burn at the end.  Some of the tail wind that I was enjoying early on in the race was suddenly in my face and I knew the last mile or so was rolling hills.

Mile 14 I started to feel a little hazy as I hit the main road back into Eden.  I noticed a lot of other people struggling here as well.  I would get passed by people and do some passing -- particularly those from the short course who started in a different location. 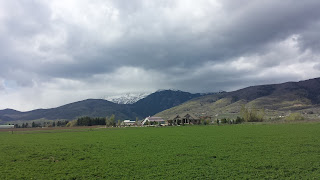 Once I got on the dirt road around mile 16 and saw that I had a gradual downhill, I picked up the pace.  I had been taking gels every 5.5 miles and I think I finally got a jolt from one.  Also, the road was wet so there was less dust and rocks that got in my shoes.

The last 2 miles of the race were a struggle.  I kept looking at my Garmin and realized that if this was going to be (more or less) an out-and-back course that I was only going to run 18.2 miles today, not 18.6 (which is a true 30K).  As the school, where we started, kept coming into view, I began to wonder if they were going to make us run a lap around it or if we were simply finishing there.  Again, I was hurting so I was happy to see that the finish line was going to be an 18.2 mile race. 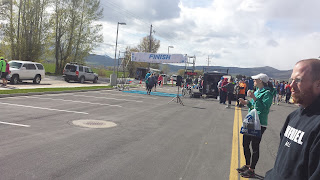 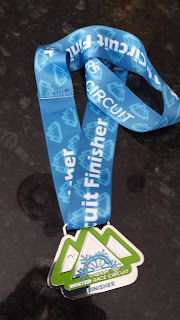 After the race, I wound up grabbing some donuts and Gatorade and walked around a bit to cool down.  Since I had done the series, I knew a bunch of people and wound up making small talk with a bunch of them.

This race was the smallest of the bunch but they had a good turnout for it.  Many people were ready to run Ogden next month while others had various races looming on their calendar.

It turned out to be a windy, but beautiful day for a run.  Running in Eden, despite the altitude, is really peaceful and as usual the Winter Striders group did a good job.  The volunteers knew what they were doing and most of the mile markers were spot on.  The course was also easy to follow and had police presence at critical intersections.  The bathrooms at the start were deluged but on the course, I had no problems getting into one.

I am a bit disappointed with my time.  Last year, I had a phenomenal race and I think the weather conditions were more ideal.  Also, I came into this race mostly just to log miles and complete the series.  Despite the shorter distance, I was about 7 miles slower than last year.  Not good.

At about $20 a race, this series is well worth it.  Although the drive is a bit far, I try to couple the trip up there with other activities.  This time I wound up eating at Beebop Korean BBQ in Ogden.  Pretty good stuff and definitely looked authentic.  At least it wasn't the Golden Corral.