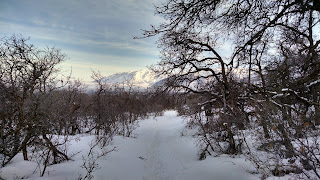 
This week was really difficult to run.  I just didn't feel it all week and while I came home and ran every day, I just felt "blah".  I know a cold / flu is going around and part of me was terrified of catching it.  Any little cough, even to clear my throat, was met with suspicion as to whether I was getting sick or not.  Couple this with the fact that I wasn't running particularly well and it had me super paranoid about becoming sick.

Also, to make matter worse, the bike trail on which I train on, was iced over.  Whoever was supposed to plow it on Saturday didn't seem to get to it until Monday.  At that point, it was mostly super packed snow and ice that made running really awful.  Luckily, as the week went along more black asphalt became exposed -- although I took a wicked tumble on Tuesday after slipping on black ice.

So I sort of made this a recovery week and made sure I was fresh for the tough 5K on Saturday.

This coming weekend, assuming the weather is right, I'll be looking to see if I have made any improvements on my speed over the winter as I run a 5K course that I've done several times now.  It is always nice to have a baseline to compare myself too.

I am happy to report that I took the plunge and signed up for the Sand Hollow Marathon.  Faithful readers may recall that I ran it last year (which you can read about here).  The race fit perfectly into my schedule and I am glad they moved it to March.  April and May are so packed that this made it an easy decision -- couple it with the fact they had a nice coupon.

I did have to get a hotel room in Cedar City though, which is about 45 minutes away from the race site.  It was about 50% cheaper.  Everything was either sold out in St George or obnoxiously priced (like $110 for a Super 8).  After the race, I'll head down to Mesquite.  It'll be just yucky to not have a shower right away after running but hopefully I can take a sink-bath at the indoor center they have there.