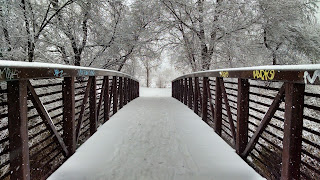 Another fairly consistent week of training.  I managed to get in a speed workout, a half marathon length long run in the middle of the week and finally a long run on the weekend.  I continue to be blessed with fairly stable weather this winter that makes it suitable for running.  In fact, I am well on my way to running more miles than last year.

I continue to turn in some solid workouts.  The fact that it is cooler out has really helped turn up the heat on my workouts.  I also generally feel pretty good well running.  Perhaps all the extra mileage I did last year has helped after all.

Another side effect of all the running I am doing is a massive increase in my appetite.  Sometimes I am out of control.  I do try to eat "good" stuff and try to maintain portion control, but it is hard to maintain sometimes.

My long run fairly well, but it was a lot tougher than I expected it to be.  The air temperature was nice and there was no wind, but it pretty much snowed the entire time.  Running in 1 to 3 inches of snow was almost like running on a beach.  My knees appreciated the softer landings, but it took a lot more energy to run.  My pace was very slow and as much as I tried to run fast it just wasn't happening. 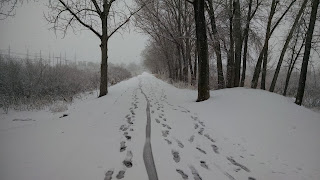 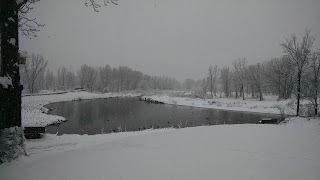 Jonesing for an Event

Being that I am largely marathon trained at this point, it feels really weird not having a "big race" on my calendar.  By big, I mean a marathon or travel to event.

Granted, I have a bunch of shorter races, but there isn't anything I am counting down the days to.  It is very frustrating to me.  I suffer a lot of cabin fever as a result.  This racing and traveling stuff is addicting to say the least.  It is frustrating to have a ton of destination races in spring and nothing right about now.  And flying from SLC isn't exactly cheap.  Argh.  The life of a race junky.