Truth be told, I am still pretty much a glam / 80's metal fan -- despite what I may be listening to currently (mostly American Standards and KPop).  So when I was looking at the upcoming concert lineup for Wendover, I saw that Bret Michaels was coming to town.  As the front man for Poison, I knew that Bret put on a good show.  I don't think I ever saw Poison back in the heyday, but I did see Bret put on an awesome show when I ran the Las Vegas Marathon in 2010.

That being said, I booked a room at the Peppermill, bought a ticket and headed west on Saturday.

Originally, Shari and I had planned to leave around 2pm and roll into Wendover no later than 4.  We'd time that with the dinner buffet and be able to gamble, eat and I'd have enough time to see the show.  However, it was pouring rain and the plans I had for the morning were shot.  So with a little coercing we got in the car by 11:30am and took off.

The first half of the drive there was in rain.  Luckily, it was pretty smooth sailing and once we got past the half way point. 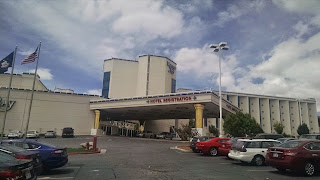 We rolled into Montego Bay just after 1 and decided that we were pretty hungry.  Our original plan was just to eat dinner but we were both ravenous.  I had a lot of comps from previous visits to Wendover so we cashed those in and ate for about $1.50.  They were still serving breakfast so I loaded up on their cheese blintzes.  I just love those things even though I am willing to bet they are a ton of calories each.

After eating we opted to do a bit of gambling.  It was 5X comps so the more we played the more we earned.  Granted, this is pennies on the dollar, but through a casual afternoon of gambling one can generally earn a free meal (or two).

I didn't have a lot of luck at Montego Bay.  I kept things pretty sedate and just stuck with my Fu Dao Le machine.  They have a ton of them now and when one wasn't paying off (or busy) I'd jump on another.  I wound up playing for a bit of time but I was pretty much losing more than I was winning.  I want to say by the time we went to the Peppermill, where our room was, I was down about $50.

We checked in the Peppermill, which didn't take that long.  The room wasn't comped, but I had scored a pretty good deal on it.  It had been a while since I had stayed there, as we usually stay at Montego or if we are on a budget, we stay at the Rainbow.  The room was nice but I sort of regretted not staying elsewhere since they don't have easy access to a pool.

I wound up playing more Fu Dao Le and got some decent bonus rounds: 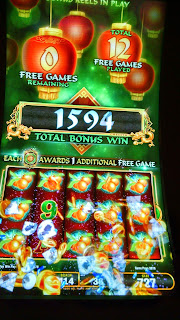 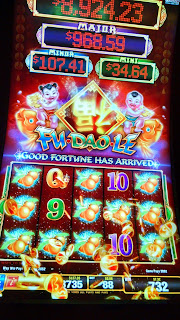 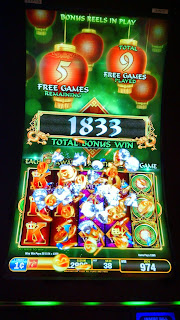 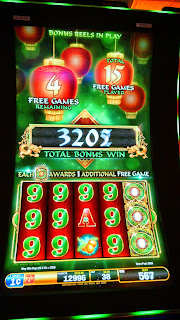 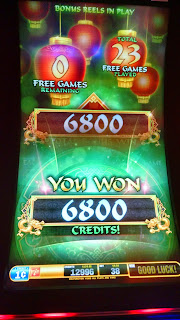 They were also doing some drawings for free play / cash, but unfortunately we weren't one of the selected ones.  We certainly don't play as much as some of the high rollers and the chances of winning are based upon play.  None the less it can, but not just not this trip.

I also had an awesome run on a Fu Dao Le bonus round where I got "Good Fortune" no less than 3 times during the bonus round.  When the Good Fortune interstitial comes up during a bonus round, you know you have something good.  It could mean a win of a hundred bucks or even more.  While I didn't hit a massive payoff, I did get a couple $10 - $30 mini-jackpots.

On a whim, I checked the sports book and found a baseball bet that I liked.  Normally I don't follow baseball that much but I do know how to read a stats sheet and cursory follow the sport.  I saw that the red hot Astros were playing the Angels and the Astros had a pitcher with an insanely low ERA up against an average pitcher.  The payoff was pretty much "pick'em" so I went with the Astros for $25.  I didn't have a lot of luck up to that point and I may have put more money on them, but I am happy to report that I won (after a close call in the ninth inning). 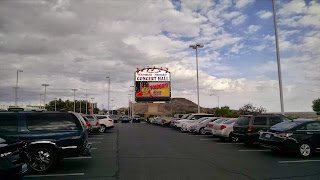 Around 6;30, I hoofed it over to the Peppermill concert hall -- about a quarter mile down the road.  Lots of people were making their way there for the (I think) sold out show.  The Peppermill concert hall is really a cool place to see a show as there really isn't a bad seat in the house.  Since I had bought a single ticket, I got a really nice end seat.  I think I've sat in the seat before: 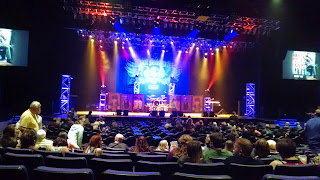 Bret jumped on the stage just after 7:15 and played for a little over an hour.  Generally bands play for 90 minutes and I was sort of disappointed he didn't play longer.  Either way, he did play a lot of his classic songs and the show was very entertaining.  I just felt let down that he didn't go longer. 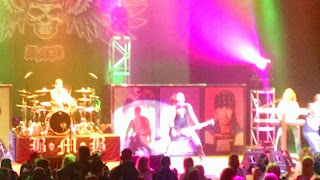 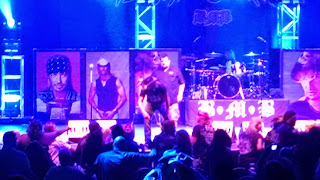 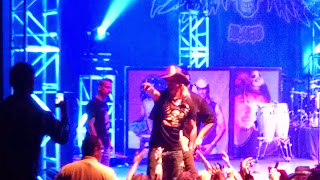 After the show I waddled back over to the Peppermill.  Shari had gone through all her money and sadly was reading in the hotel room.  The night was still fairly young so we headed down to the casino.  I hadn't had too much luck, throughout the day, but suddenly fate turned and I wound up getting a mini bonus for about $20 and then a minor jackpot for $93.

I also had a long ride on a Fu Dao Le Machine that I was able to play for nearly an hour.  I did dump a twenty into a Rise of Ra and got virtually nothing.  It also seemed like the fates were telling me to stick with Fu Dao Le.

After playing we thought about going over to Montego Bay for a late night buffet, but 1) I didn't feel like driving the whole half mile and 2) I don't think either one of us were that hungry.  The Peppermill has a cafe.  In the past I haven't had very good service or food at the Peppermill, but being we just wanted something simple (Shari had a craving for fries) we ate there.  I am pleased to report that the service and food were good.  We once again used our comps that we had earned to buy a very yummy pizza and Shari had a massive omelette with hash browns. 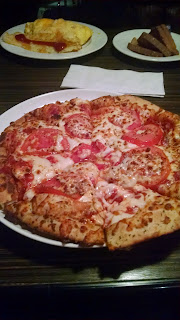 We decided to hit the hay just shy of eleven.  I slept rather poorly.  I think the AC wasn't kicking in and the pizza I had, made me thirsty.  Also there was a delivery truck or something outside our window at 5AM that was making noise too.

Around 7:30 I stumbled out of bed and through on my running gear.  With the Ogden Marathon so close, I had to curtail my mileage and I really didn't want any hard core trails.  North of Wendover is a lot of trails, some of which can be rocky and I certainly didn't want to twist an ankle.

I did my 6 mile loop (or so) on the Wendover / Leppy Hills bike trail.  I've taken a ton of shots of this place before.  It was perfect weather for a run though -- sunny, yet cool and I want sans a shirt while on the trail.  I've rarely seen people on the trail, so I wasn't afraid to show what I got... 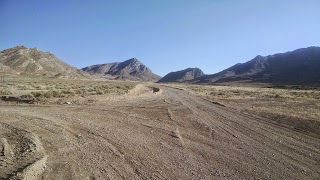 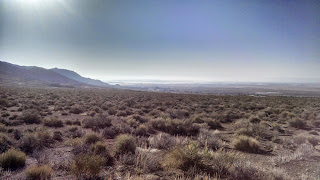 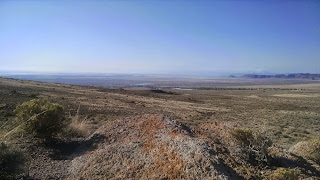 I came back to the Peppermill and showered and packed my gear.  Shari takes a while to get ready so I jumped into the casino and dropped about $15 and used my $5 free play.  I was pretty much down about twenty bucks and I didn't want to go on a losing streak and go home broke.

Once Shari was ready and packed, we headed on over to the Montego Bay for our 2-for-1 breakfast buffet.  So for $18 we ate like kings (and queens).  Good stuff.  Unfortunately, I was still pretty full from the previous night and while I had a good amount of food, I didn't have the power to consume what I usually do.

We circled the casino for a bit and decided to gas up the car and drop into the Rainbow for a bit.  Normally I have crappy luck at the Rainbow, but today, I was kicking butt.  My luck continued to be good and I am happy to report that I came home with more money in my wallet than what I left with: 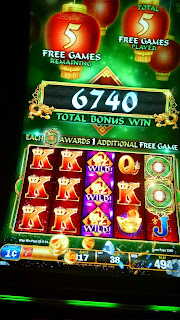 I tried another Bally machine and didn't get anything on that either.  No matter what I played, I didn't win -- with the exception of Fu Dao Le.  I love that game.

Well, we had a good time.  Here is the results: