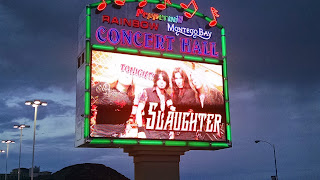 Last weekend, Shari and I were sitting around trying to figure out what we wanted to do this weekend.  We talked briefly about making a day trip up to Wendover but we weren't really due anything (no free buffet nor any comp multipliers, etc).

So we just said, why not live it up a bit this weekend instead?  I found rooms were still pretty reasonable, they were running 5X comps on Friday and I could see the (early) 90's metal (hard rock bands) Vixen and Slaughter on the cheap too.  So a few minutes later I booked what I needed to and the plan was set.

I had been counting down the hours (literally) until we left starting on Wednesday and once the clock struck four at work, I rushed home, threw together my stuff and we headed west.  The trip there was pretty uneventful other there were a TON of cops on the road.  We rolled in Wendover just before 6.

We had talked on the way out there where to eat.  Shari isn't a seafood person, so the pricey $27.99 seafood spectacular didn't appeal to her and I wasn't terribly hungry when we left.  However, when we rolled in, I was famished (big surprise, huh?)  We decided to see how bad the cafe was versus the buffet.

I was pretty jazzed to be there and while Shari went to the bathroom I jumped on the nearest Fu Dao Le machine.  I threw in a twenty and before I knew it, I was hitting bonus round after bonus round.  I guess I hit the machine just in time and before it, my twenty had turned into nearly a hundred bucks! 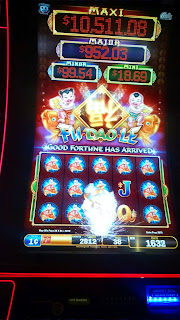 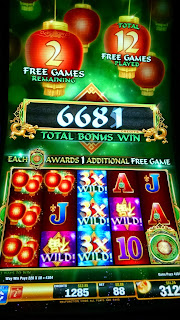 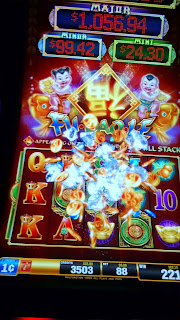 After the machine went cold (and I could hear the rumbling in my stomach) I decided to cash out.  I checked the time and I was within ear shot of the sports book and discovered that if I wanted to bet on any baseball games, that now was the time.  It was fast approaching 6:30 and soon the final games would be locked out.  I studied a prop sheet and decided to take the Giants over the Rockies for $25.

We ate dinner at the buffet.  There was a bit of a line up but it moved quick enough.  It was expensive -- about $60 with tax for the two of us.  I pigged out on plate after plate of crab legs and got myself a tuna steak and other premium seafood.

After dinner we got back in the car and headed on over to the Rainbow.  Our room was there and checkin was fairly painless.  I didn't get the upgraded room, but for all intents and purposes it was nice.  On the way to the room, I stuck in a few more bucks into Fu Dao Le and at first I was losing, but got some hot bonus rounds that brought my initial losses back up.

By the time we made it to the room and got settled, it was time for me to head on over to the concert hall to see Slaughter and Vixen. 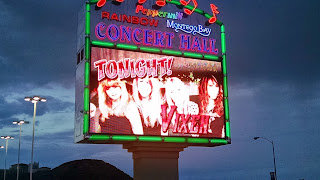 First off, I am not a super huge fan of either group, but I do own, I think, all of Slaughter's albums.  I also vaguely recall seeing Slaughter open at the Hard Rock Casino's "The Joint" before the hotel was officially open (I worked for a company that did a lot of work for the hotel and got to be in a pre-opening party).  Vixen, the all female hard group from the early 90's, is a group I didn't really know anything about.  If I was on a hypothetical trivia show, I would not be able to name any of their songs and I pretty much know a ton of 80's metal trivia.

I got a pretty decent seat at the last minute for $10 plus $5 service charge.  In fact, it was just down the row from where I sat at for the Bret Michaels show.  I guess it pays to go solo, as you get these one off seats: 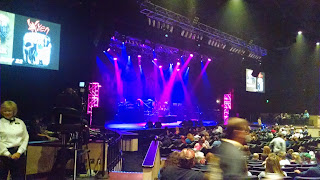 Vixen turned out to be a pretty good show.  Again, I didn't know any of their songs, but they still looked pretty good.

Slaughter seemed to have gotten off to a slow start.  They jumped on around 10:15 and it would seem that the Peppermill concert hall has a very strict cutoff time.  From what I am told, Slaughter pretty much finished a song, just prior to eleven, walked off the stage and the house lights came on.  No encore, no farewell, nothing.  My guess is that if they are late, they have to pay the employees to stick around -- just a hunch.

I had left at that point though.  My reasons were thus:

After the concert I headed on over to the Peppermill. My baseball ticket was nearly a sure thing, with the Giants up 11 to 6 or so in the bottom of the ninth, but the Rockies made it interesting and there was a length rain delay. It wasn't until close to midnight that could officially cash it.

I wound up playing some Fu Dao Le and circled the casino for a good hour.  I did dabble in some video blackjack, sometimes winning a few bucks, sometimes losing.  By the time I left the Peppermill though I was down to about a $20 profit.

I headed on over to the Rainbow.  Shari had already gone to bed and I was still sort of jacked from the show and gaming.  I tried my lucky machine that I had hit for $1000 a few weeks ago for another $40 and didn't get anything.  I tried a few others and wound up winning a few dollars, but nothing to write home about.  By 1AM I crawled into bed and turned out the lights for the night -- or so I thought.

Knocks in the Night

Around 3:30 in the morning I was jarred awake with Shari exclaiming that someone was knocking on our door.  I was like WTF.  I had taken a sleeping pill and in a daze I walked to the door and peeped out the hole.

Someone indeed was standing there.  They were about to knock again and I was like, "You've got the wrong room".

They replied, "Are you the owner of a purple Mazda?"

They said, "There was an incident with your car and the police are here and want to talk to you.  Someone damaged your car and we need you to take a report"  Apparently it was hotel security.

Shari was panicking saying it was a hoax and I was going to get jacked.  To make a long story short, I told them I'd meet them in the parking lot.  So I put on my clothes and bleery-eyed made it down to the parking lot.

Sure enough the West Wendover police were parked behind my car.  I thought at first that my car's front windshield had been broken but it was just the rain (it was raining lightly).

Turns out a drunk was wandering through the parking lot, figured it would be a wonderful idea to throw rocks at peoples' cars.  Mine was one of the two he apparently chose.

There was a tiny nick / gouge on the back window.  The drunk apparently was willing to pay for the damage and the police wanted my information and they also wanted to know if I wanted to press charges.

To a fault, I am a very forgiving person and the damage was pretty minimal.  So I declined to press charges.  I'll have to see if the window will pass inspection as I have an inspection coming up.  If it won't hold up, I'll  have to replace it (with the vandalizer paying for it) but I think I can live with it.  It is really minor:

To say the least, I didn't sleep particularly well the rest of the night.

Normally I go for a run in the morning and I was sort of regretting that I hadn't.  It was a really nice, damp morning.  However, running out in the desert on the damp ground means there is a HUGE likelihood of running into rattlers.  That, and I was really really tired.

I wound up sleeping until 9:20 despite initially being up at 7AM.  I did get a chance to check out the Rainbow Hotel's pool area.  The jacuzzi's jets are a little underwhelming and it could've been hotter.  Also, it was kid's city, so it was hard to relax with kids jumping from the pool to the Jacuzzi and back: 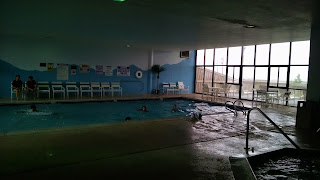 Just shy of eleven, Shari and I headed over to Montego Bay for the breakfast.  Since it was Saturday, we weren't eligible for the 2-for-1 buffet ticket, but we did have enough comps for one of us to eat for free.  I did myself well there and inhaled a ton of food:

After eating, I wound up having a VERY nice run on another Fu Dao Le machine.  Be and some other woman were dueling with competing bonuses.  She was clearly the winner though and managed to turn her initial $200 into $600.  Me, I turned my $20 into a $100 and then some.

I played for nearly an hour too and wound up hitting a $90 Minor Jackpot:

I almost got the red envelope jackpot twice.  My heart always skips a beat when I get the first column with a red envelope.  Unfortunately, the second envelope never appeared all weekend long.  I am WAY overdue for hitting that one.

We wound up circling the casino for another hour and I wound up putting in a few bucks more.  Nothing too outrageous happened though and just shy of 2 pm we hit the road and headed back to Salt Lake City.