There were a bunch of races today and ultimately I settled on the Oquirrh Mountain Half Marathon (you can see my reasons here).  Located in Tooele, Utah, this race was cheap, fairly close by and I had a friend of mine running it so we would up carpooling.  Also, I haven't really had a chance to explore much of Tooele so it would give me the opportunity to see the sites, so to speak. 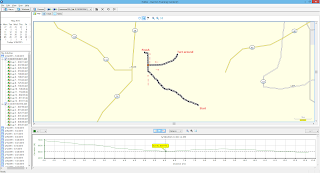 I woke up at 3:30 AM and quickly powered down a breakfast consisting of Wheaties, some ice tea and of course a can of beets.  I drink as much as I can in terms of the juice, but I know my limit.  I really wish they would make a better tasting juice.

By 4:30 my carpooling friend swung by and we headed west.  The trip there went by super quick and by 5:15 I was picking up my bib.

The race was headquartered at an LDS Church and they had clean, flush bathrooms.  I made a visit or two there and by 5:45 the bus loaded to take us to about the top of Middle Canyon.  This was a pretty small race and the entire contingent of half marathoners fit into one large school bus.  The drive seemed to take a while but we arrived around 6:10.

There were no bathrooms up there.  Luckily us guys (and some girls) could easily take care of business behind a tree.  Without much fan fair, the race started at about 6:30 (thank goodness there wasn't a huge wait up at the top). 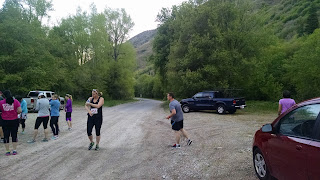 The first five miles are simply stunning -- and fast.  I hadn't really looked at the course profile other than it was primarily downhill and that I'd have a climb around mile 6 through 9.  I knew I was capable of something like a 1:47 - 1:52 but I never know how to race a primarily downhill race.  Do I hold steady? Do I take advantage of the hills? Do I blast down the hill?

I took a fairly conservative approach.  I put forth the effort that I would put forth if I was running a flat half, but didn't let the hills slow me down.  It seemed to work for the most part, but after nearly 2000 feet of elevation drop in five miles, my poor quads were shot by the time I hit the hills.  I think there is still some residual soreness from the Ogden Marathon in my legs as well.

I went out with a group of people and a few people got a head of me, but I managed to reel them in.  I felt comfortable in my pace, despite it being closer to 5K pace.  I didn't feel like I was working hard, but I was taking advantage of the hills. 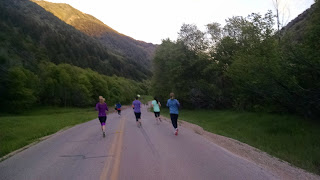 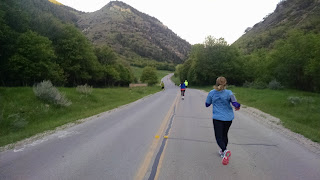 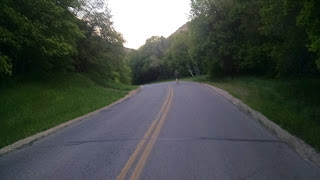 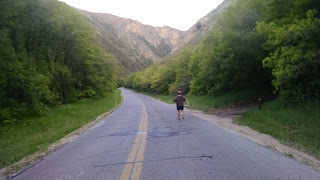 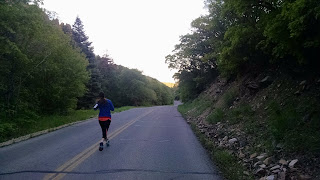 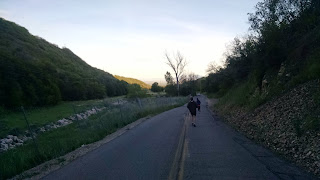 After going down the canyon you are greeted with a beautiful site of Salt Lake and Stansbury Island in the distance. 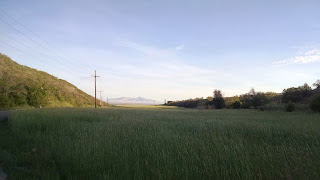 After the first five miles are so you have to make a turn onto Smelter Road.  This is a lonely road looked harmless when we passed by it on the way to the top, but the evil lay right around the corner.  There was a good mile or two of incline.  It was just painful to go up it -- especially after your quads got beaten down on the downhill part.  You also had the sun in your eyes (I had completely forgotten about my sunglasses) and my 7:30 pace quickly turned into a marathon shuffle.

I looked around though and saw that most of the other people were walking up this hill.  I kept running and post race a lot of the leaders said "I looked strong and good" but to be honest I felt like quitting at that point.  To feel so exhausted and beat up at mile 7 of a half marathon is just plain outright bad news: 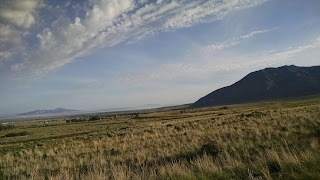 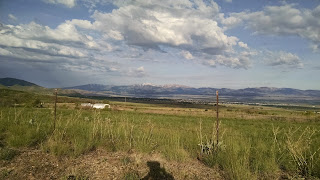 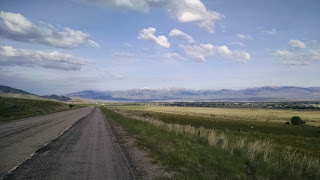 Finally at mile 9 (I thought I would never make it) I hit the 3rd water stop (they were kind of stingy with water stops: one at mile 2, one just after 6, one at 9 and finally the last at 11.25)  I was starting to tell myself this was a throw away race and the Smelter Road hill had totally killed me.

I was really dehydrated and I sucked down a bunch of Gatorade and water at the stop and started to make my way back down Smelter.  The guys at the water stop said it was mostly downhill to the finish and it certainly was.  By mile 10 I was finally back down to low eight minute miles.

At this point, too, I was largely running solo.  A slew of runners were behind me but the nearest front runner was at least three fourth's of a mile away.  I figured I was in the top seven and I just simply wanted to beat the 1:50 pace setter (they did have a pace setters there).

I was a bit worried that I wasn't going to be able to find the LDS church but I am happy to report that the people organizing this race had it down to a science and I crossed the finish line in 1:50:14 (or so).

Also what was a nice tough was that nearly every quarter mile was a large American flag.  It gave you reassurance you were going the right way and was just a nice touch to mark the miles. 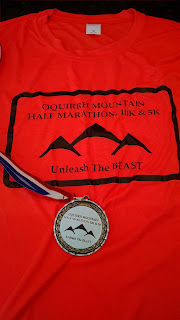 After the race I drank a TON of Gatorade.  I think I started out the race slightly dehydrated and there were only 4 water stops on the course.  They had some basic food at the finish too: ice cream sandwiches, bananas and some protein bars.

You didn't get your finisher's medal until after everyone finished the race, which was sort of bummer.  They also only gave away awards to the top 3 overall.  Given the size of the race that is understandable though.  They also had printed certificates, but we didn't hang around for them.

I'd do this race again.  It isn't an easy course but it is a stunning course.  The price for the race was cheap ($45 with the 10% service charge), it started without any huge waits and while course support could use an additional water stop, I felt like I knew where I was going throughout the race.

Post race, I have some soreness and my plantar fasciitis is really bothering me.  I am not a huge downhill racer fan, but I can certainly understand why they lead to fast times.  I was hoping to get around 1:47 but I think the massive hill on Smelter took a lot out of me and my legs had a hard time rebounding after nearly 2000 feet of descent.  If I do this race next year, I'll know how the race works and be more prepared for the challenging section.