Faithful readers may recall that I set out a rather ambitious goal of running at least 2000 miles for the year.  While there are still a lot of months left, I managed to reach 1000 miles yesterday (5/26).  This is probably the most miles I've ever run over the course of nearly 150 days.  I think the benefits are showing up in my race times: I am quite a bit faster than where I left off in 2014 and shorter distance races "seem" easier.

I still have a ways to go to my grand milestone, but I am really pleased with the results of boosting the mileage.

I also think that doing planks and core exercises after nearly every run has also helped make me injury resistant.  It doesn't take much time and I sort of enjoy the cool down effect and hanging out in the park after my run.

Also, having a safe and level place to run has helped.  In Illinois, I often ran on banked roads and I really think that made me very injury prone.

I am sucker for a tech shirt and I am a sucker for Brooks Adrenalines.  I think I have about 5 pairs that I am currently cycling through.  Women are into heels ... I am into running shoes.

The other day I got an email from the Competitor Group who seem to be in cahoots with Brooks that if I bought at least $75 worth of merchandise I'd get a free tech shirt (from Brooks Running).  Looking at my current shoes, I figured I had maybe another month left on them and decided to fork over the money.

I am definitely a fan of the new colors and designs that Brooks offers.  I always hated the silver and blue ones from years ago.  My podiatrist highly recommended these shoes and they seem to work for me.  So for the last 10 years I've pretty much worn nothing but Adrenalines (I do buy an occasional pair of New Balance though). 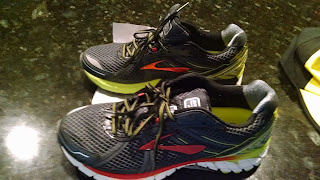 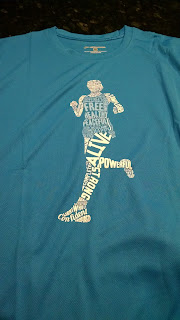 Race Chosen for this Weekend

I had a choice of three races (well I had a lot more, but these were the best) and I wound up settling on one Tuesday night:

1) Jordan River Marathon (or Half):  I really wanted to do this race.  I was toying with doing the full but I started to get a head cold on Sunday night.  It graduated to a scratchy throat.  I felt fine, but I technically had a cold.  This race was also a little pricey and at the last minute they changed the course from a point to point (which I would've loved) to an out and back (bah).  Since the course was pretty much every place I'd already run before, I opted out on this one.  And to be honest, I'd feel like a puss if I "only" did the half.

2) Boys Chase Girls Half Marathon I totally wanted to do this one.  Logistically though it would've been painful.  I would've had to be on a bus with my packet no later than 5AM.  Factor in an hour drive and it meant leaving the house at 3:30 (at the latest).  That also means I'd have to be up no later than 3AM to get ready.  I really want to run in the Morgan area though.  Heartbreaking.  Morgan does have a marathon in the summer, so I may do that.

3) Oquirrh Mountain Half Marathon This is the race I chose.  I've driven by Tooele a ton of times on my way to Wendover but never really explored it.  Basically the Oquirrh Mountains are the mountains to the west of the Salt Lake Valley and I have yet to explore them (a lot of the area is private property) It is only about 30 minutes away.  It will be an early morning but the course is primarily downhill and promises spectacular views.   I am bringing my camera -- whether permitting.
Posted by Eddie Gaul at 8:10 PM