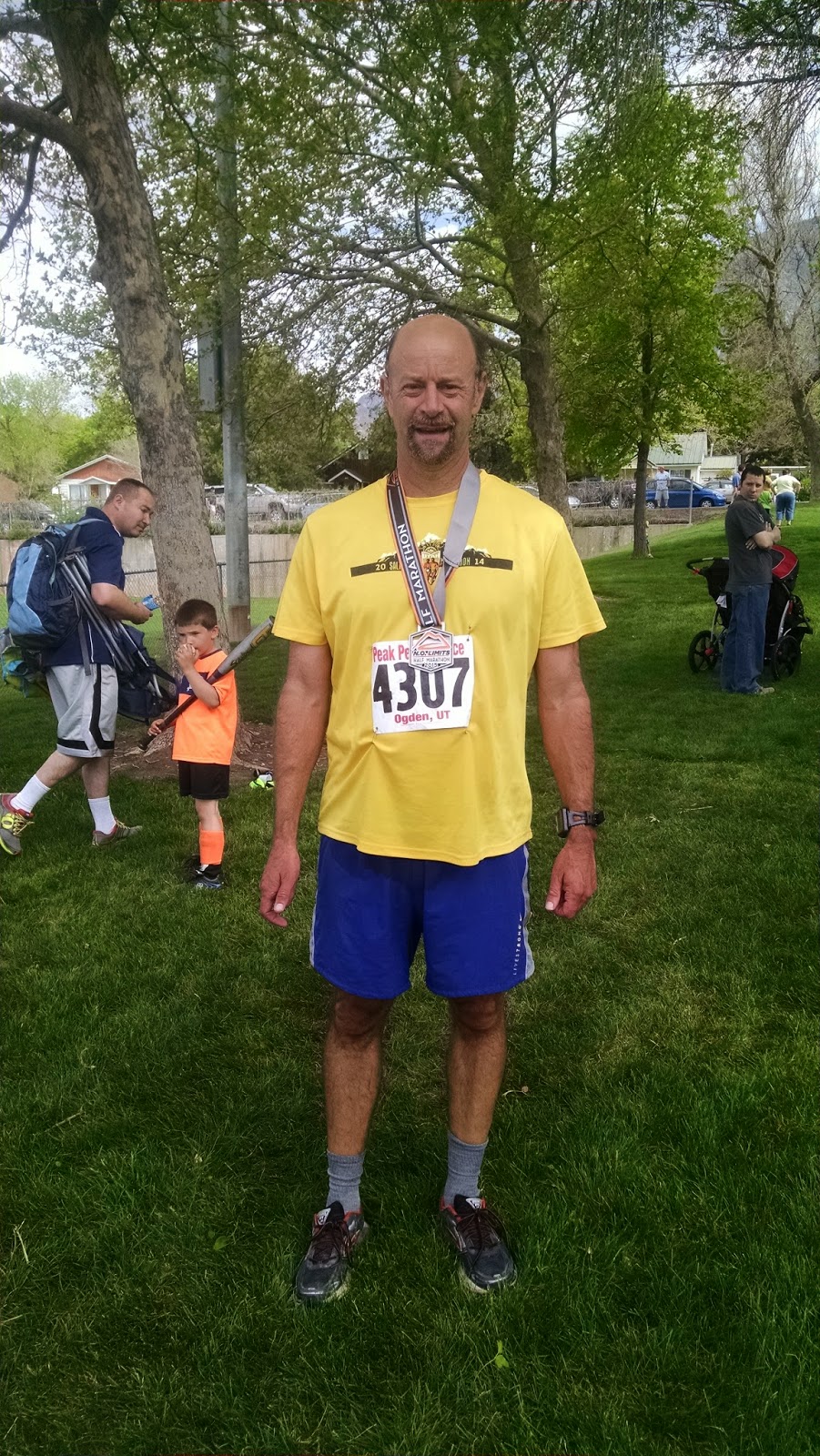 In the spirit of running a race whenever feasible, I opted in on the North Ogden NO Limits Half Marathon.  North Ogden is about an hour away from my house and I had meant to do this race last year, but I was just coming off a calf strain and I think the weather was iffy. Either way, I opted out last year.

So for about $50 one week before race day I decided to jump in and give it a go as I had never been to Farr West nor North Ogden.


I left the house just before 6:15 and rolling into North Ogden just a hair after 7AM.  I was one of the first to arrive and packet pick up was a snap.  I was worried I wasn't going to get a t-shirt as they had them only guaranteed for the first 250 registrants.  They had a nice long sleeve shirt.  I managed to use the bathroom and loafed around in my car for a bit before returning back to the outdoor bathrooms.  Nothing like pre-race jitters to clear the pipes to so speak.

I knew this race was going to be a challenge.  I had been running on fairly dead legs all week and the course promised to have a lot of elevation changes.  The website said there was roughly 600 feet of climbing -- so I knew I was in for a challenge.  And the worst of it would be almost from the get go.

As I surveyed the start line, I realized I was in a valley and the only way around it was to climb and then some: 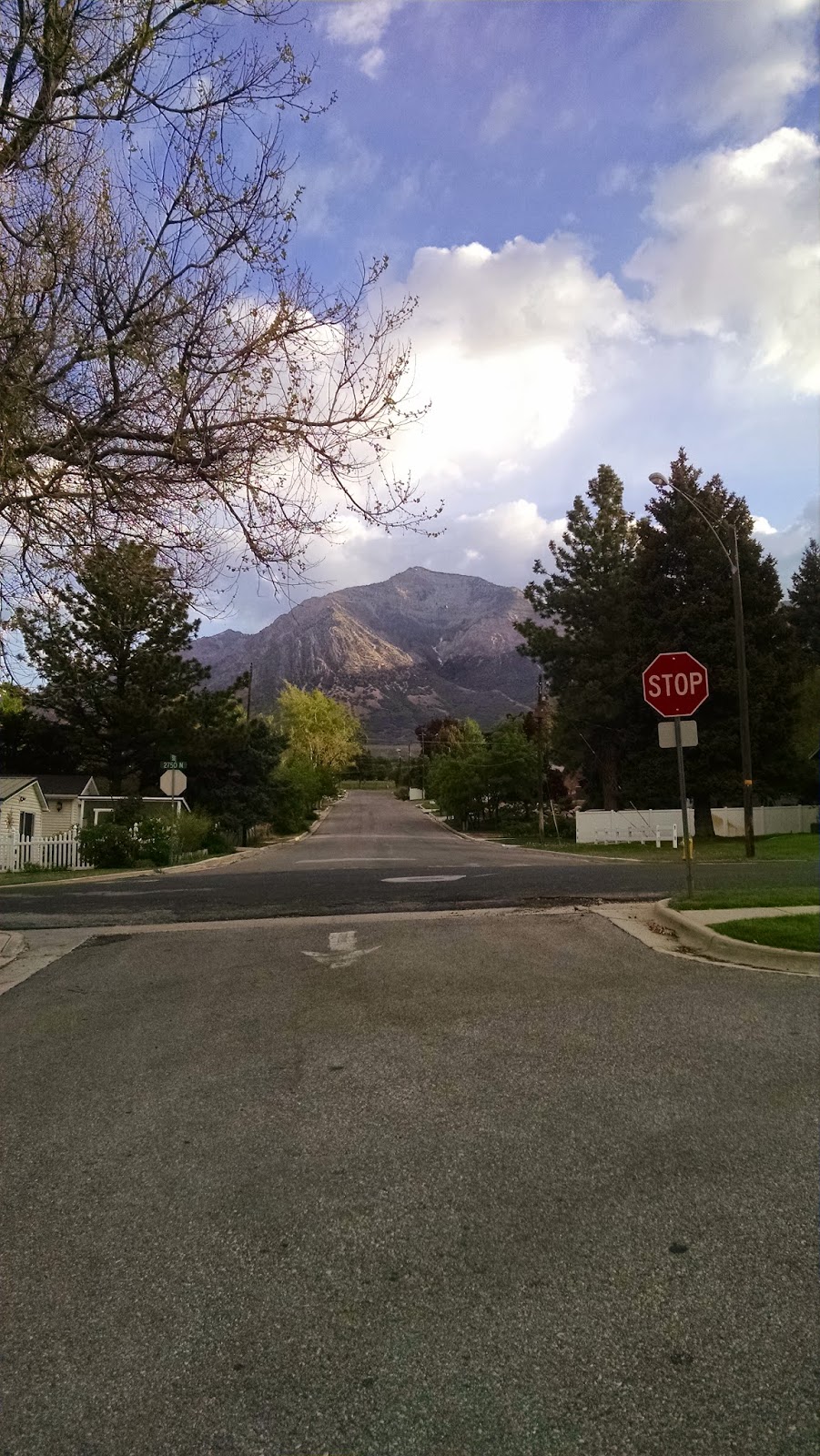 I knew to start off conservatively and I ran through the first mile at a surprising 8:19 pace.  I thought this was a bit fast especially with an uphill start.  Things got worse though when from miles 2 to 3 we did nothing but climb.  It was a very slow shuffle to the top of the hill and I wasn't even a fourth into the race before my calves were on fire and I had broken a solid sweat:


Once we reached the summit, I was able to get a second wind.  I hadn't read the details of the course, but I was surprised to learn that a good deal of this race was going to be on trail.  Some of it rocky, some of it just like dirt roads.  The effort up the hill provided some really nice views of the Ogden Valley: 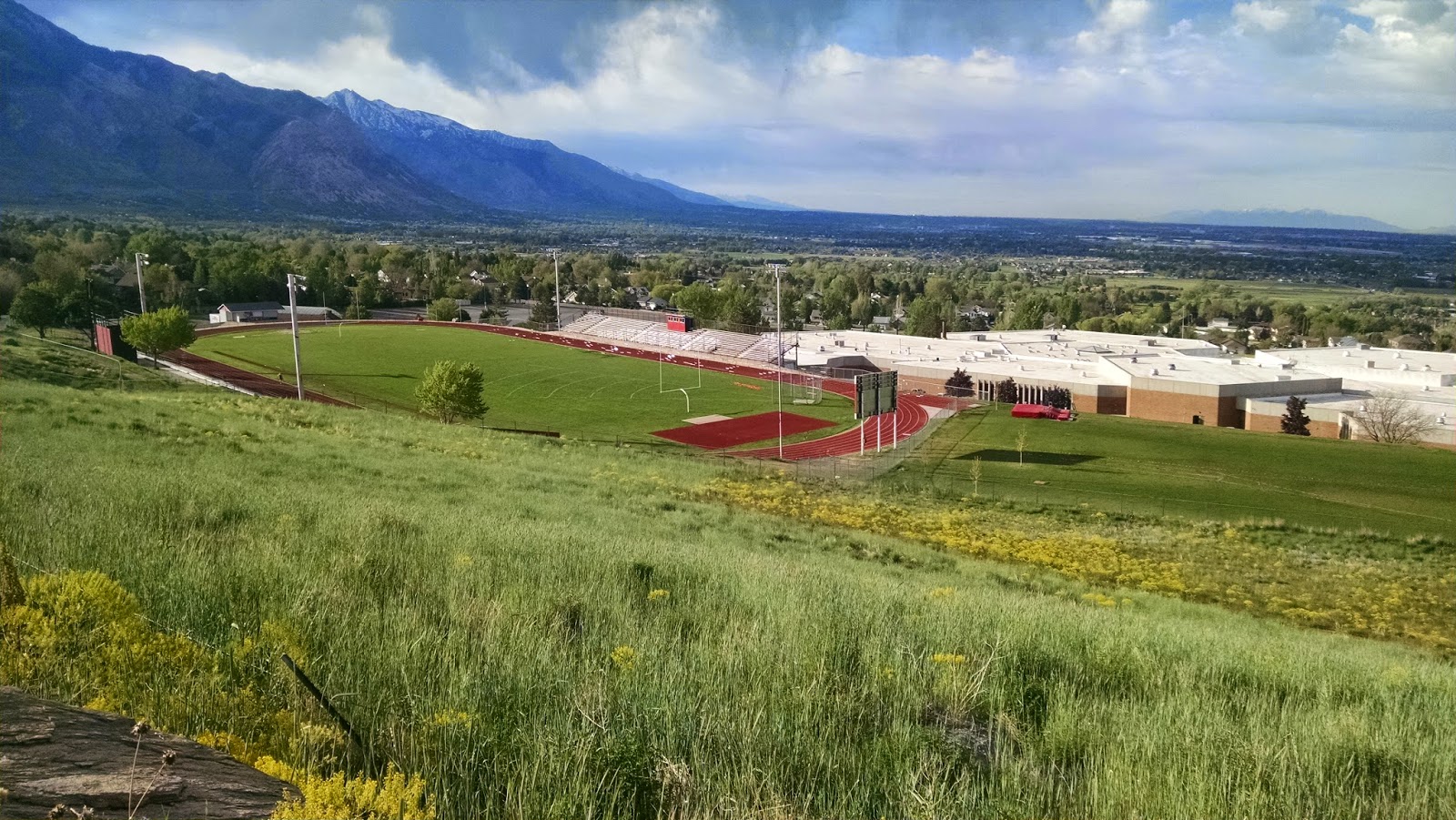 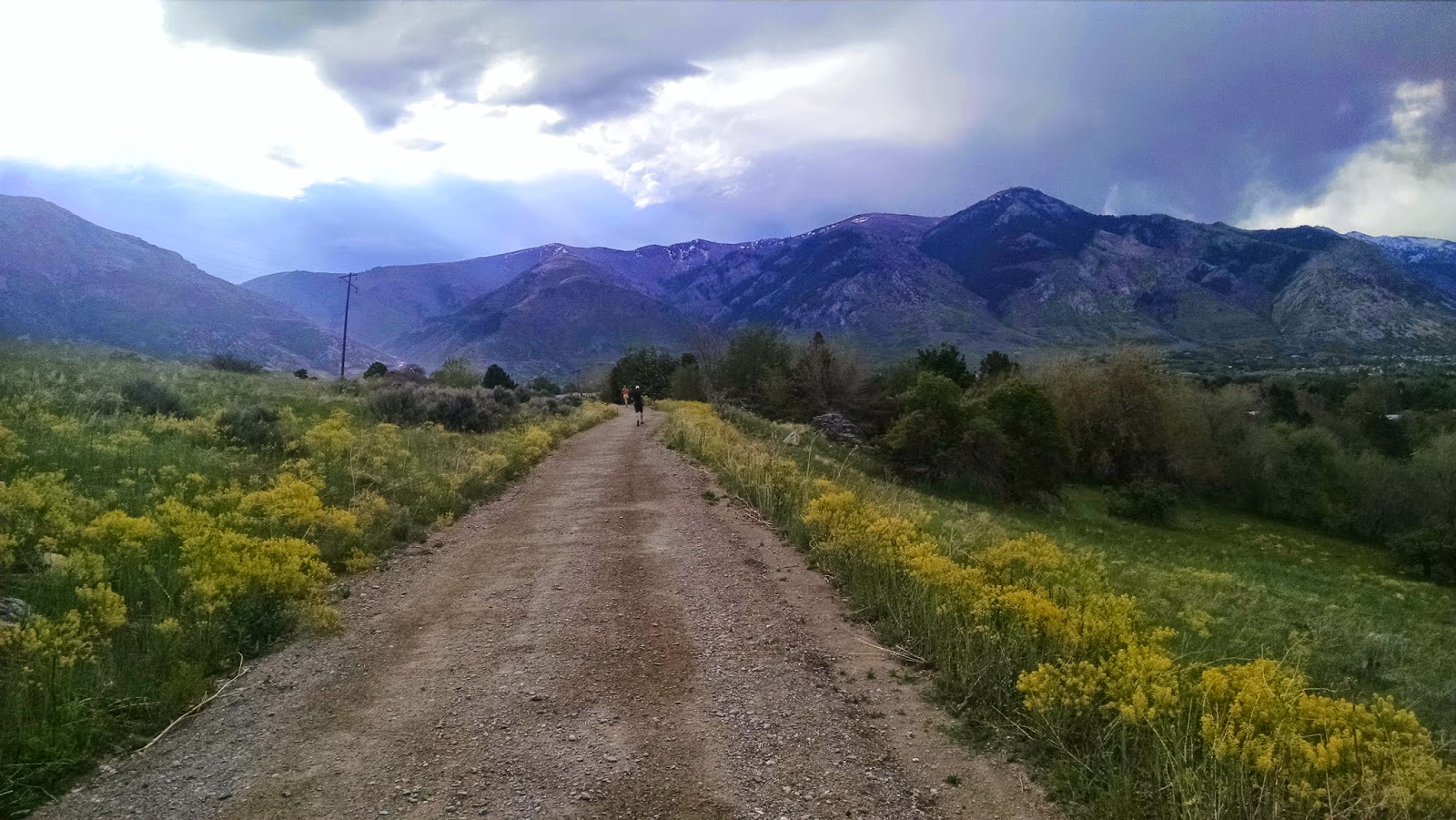 After running on the trail I assumed that the worst of the hills were over.  Largely this was true, but there were still lots of rollers left and even though there was more downhill then up, it just didn't seem that way.  The trail eventually gave way to more street / residential running.  I was really impressed with some of the houses we ran by.  I didn't realize that North Ogden (Ogden itself sometimes gets a bad rap) was so pretty. 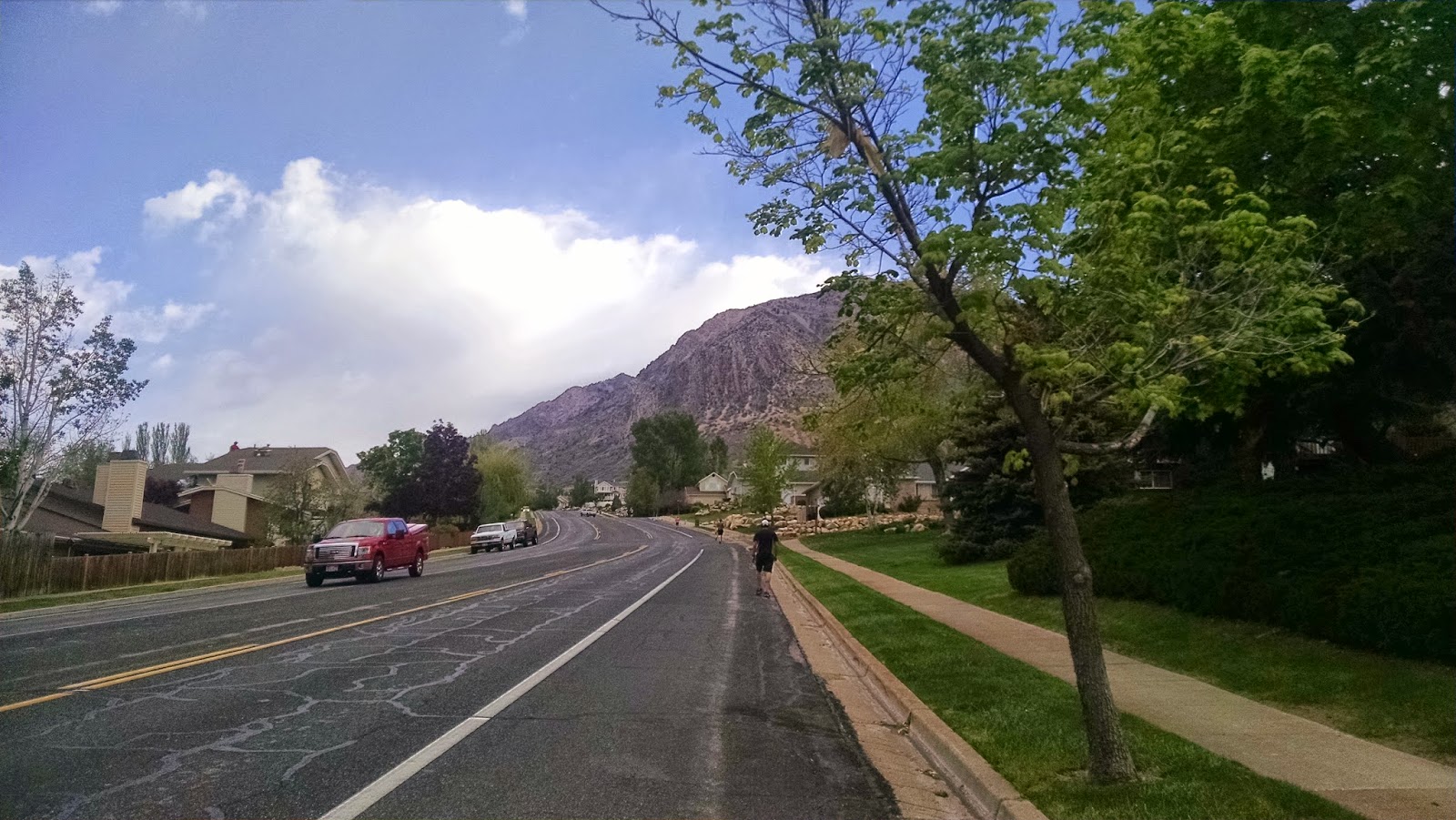 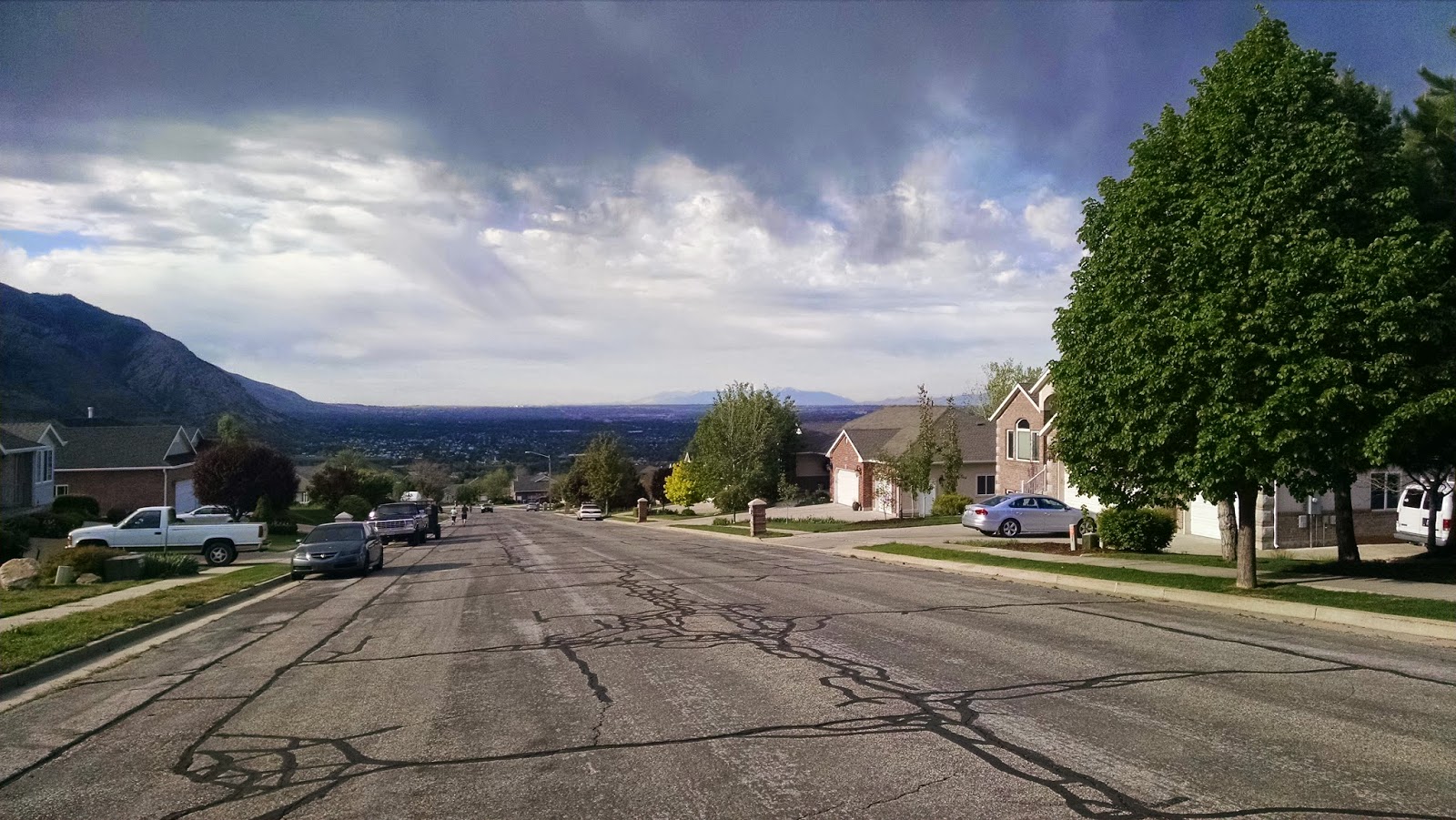 I was pretty trashed at this point and my legs felt like rubber.  I still felt like I was running as well as I could given the circumstances.  Despite the toughness of the course, I was really enjoying the scenery.  Unfortunately, this week's race wasn't as easy and I was feeling love from the "Running Gods"

Eventually the roads gave way to more trails.  These trails were definitely tougher.  They were rocky and they zigged and zagged about.  It was really hard to sustain any consistent pace.  It was absolutely stunning though and I was enjoying it despite having a lot of labored breathing: 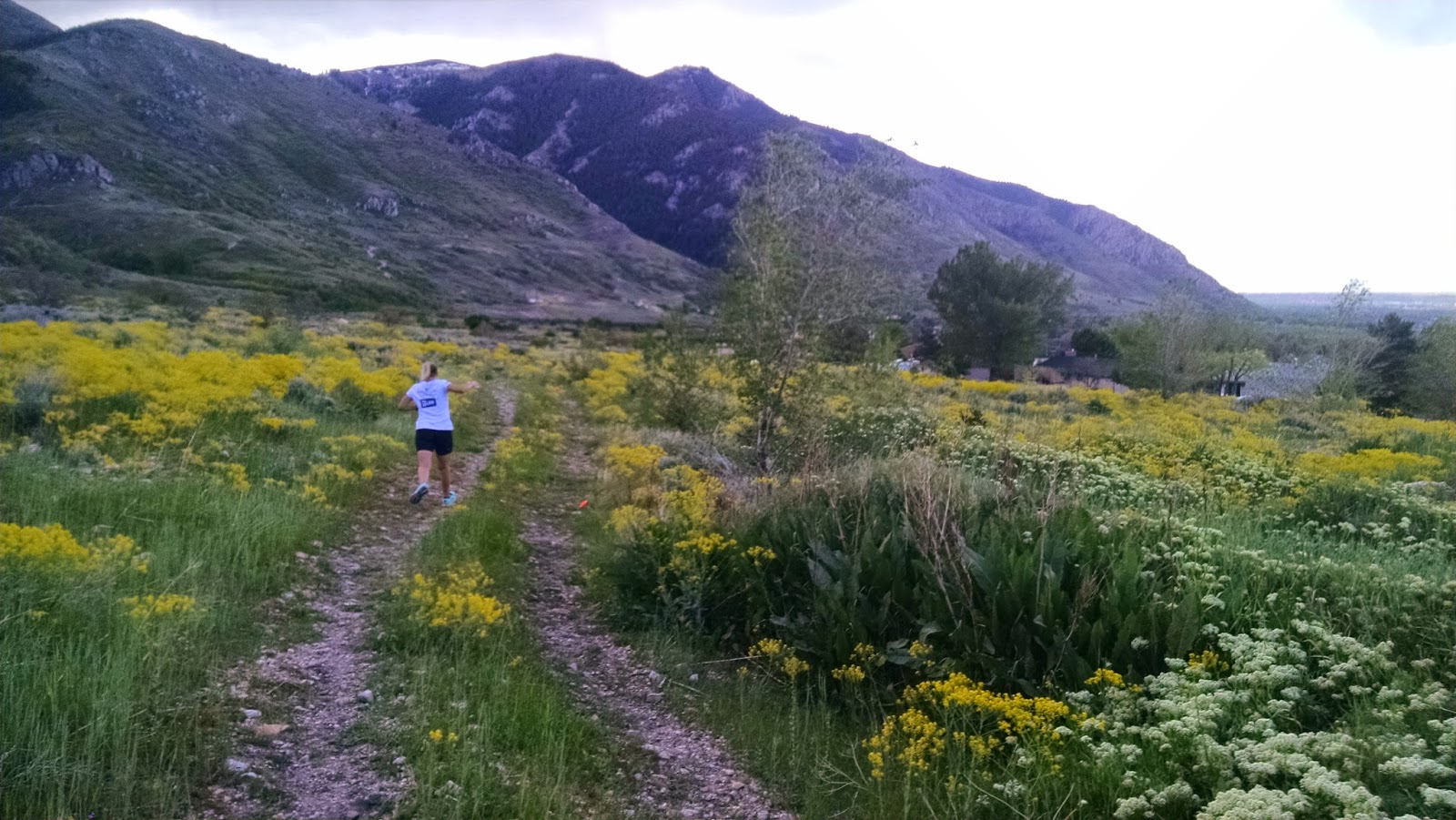 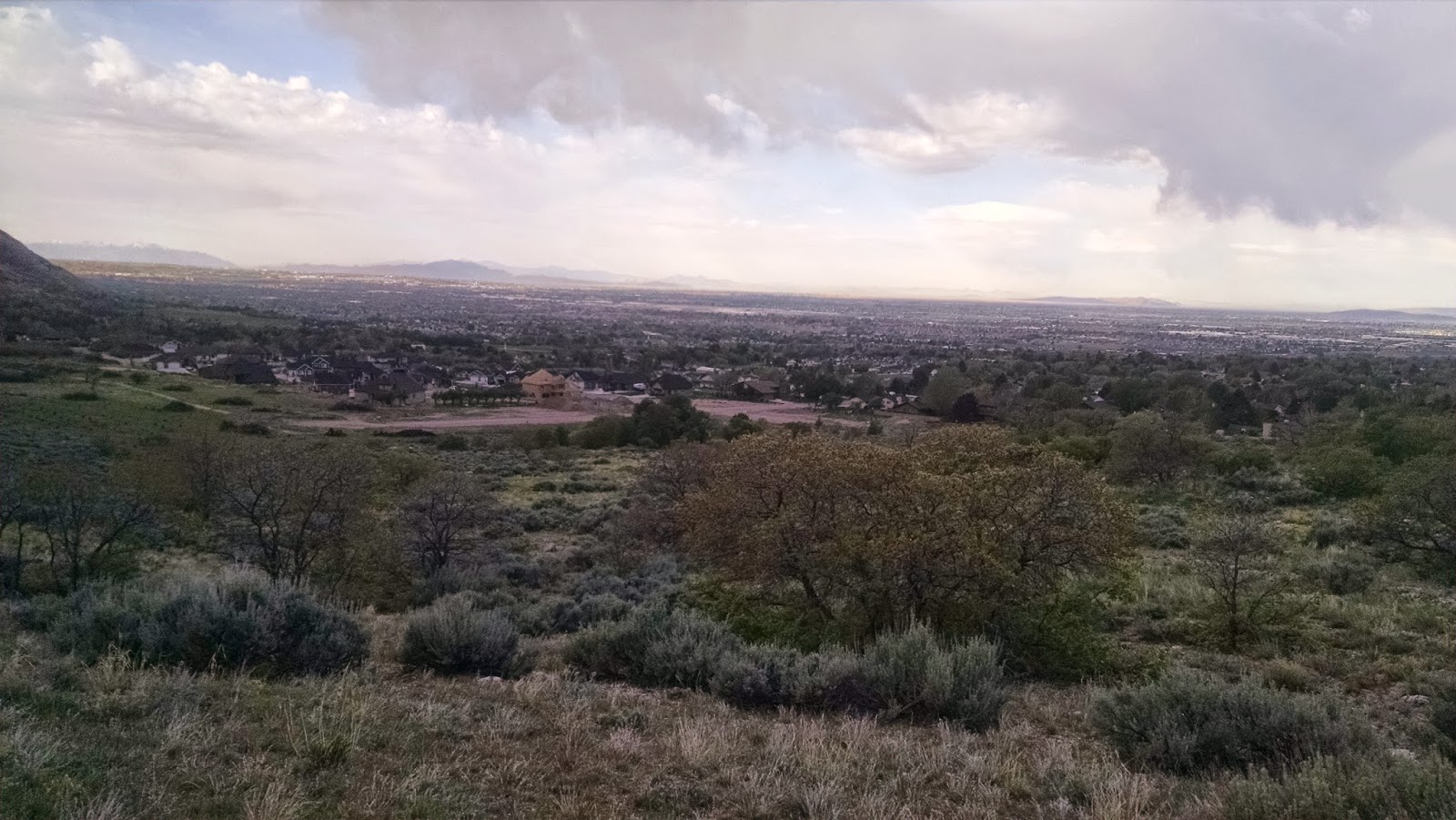 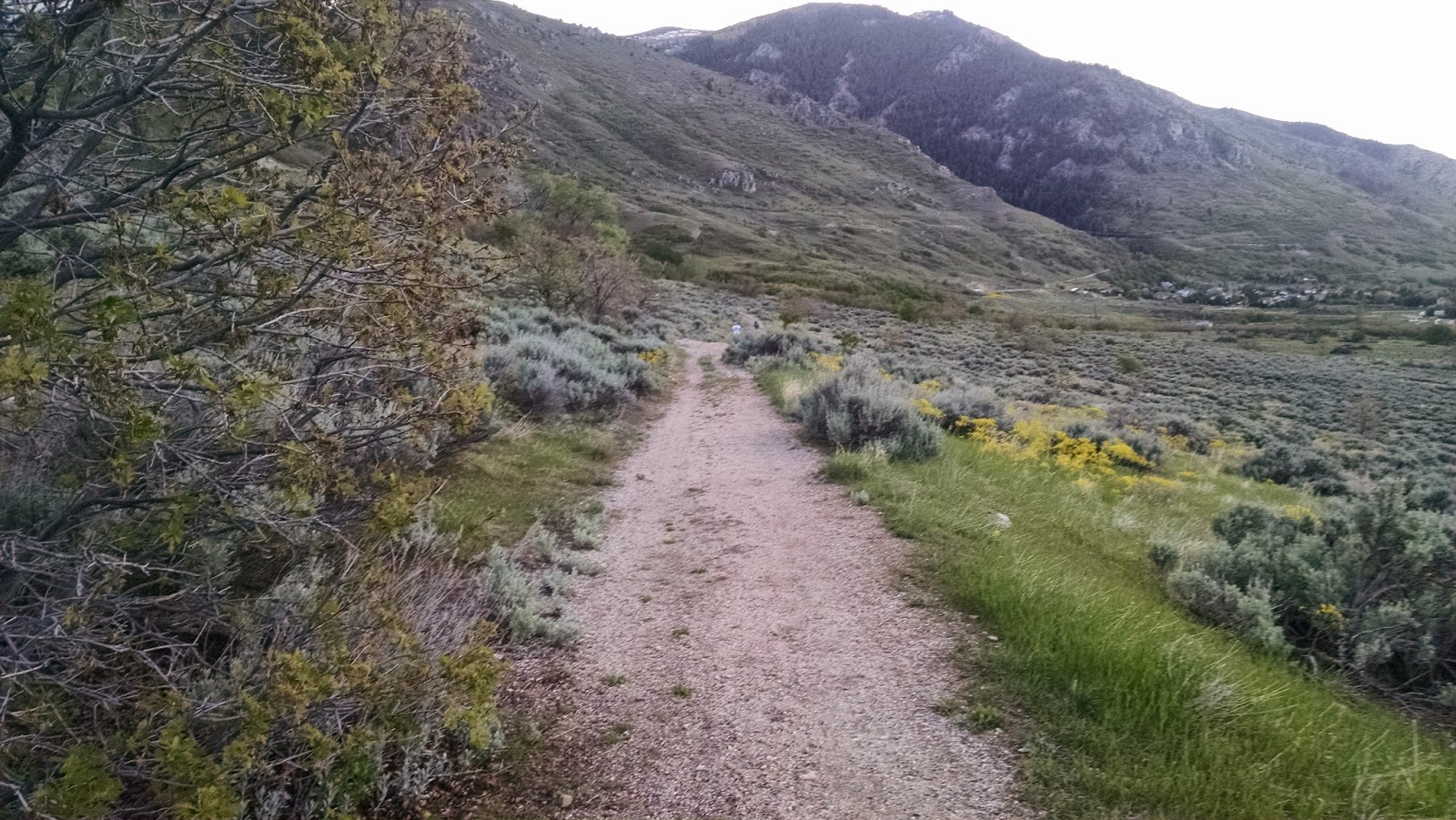 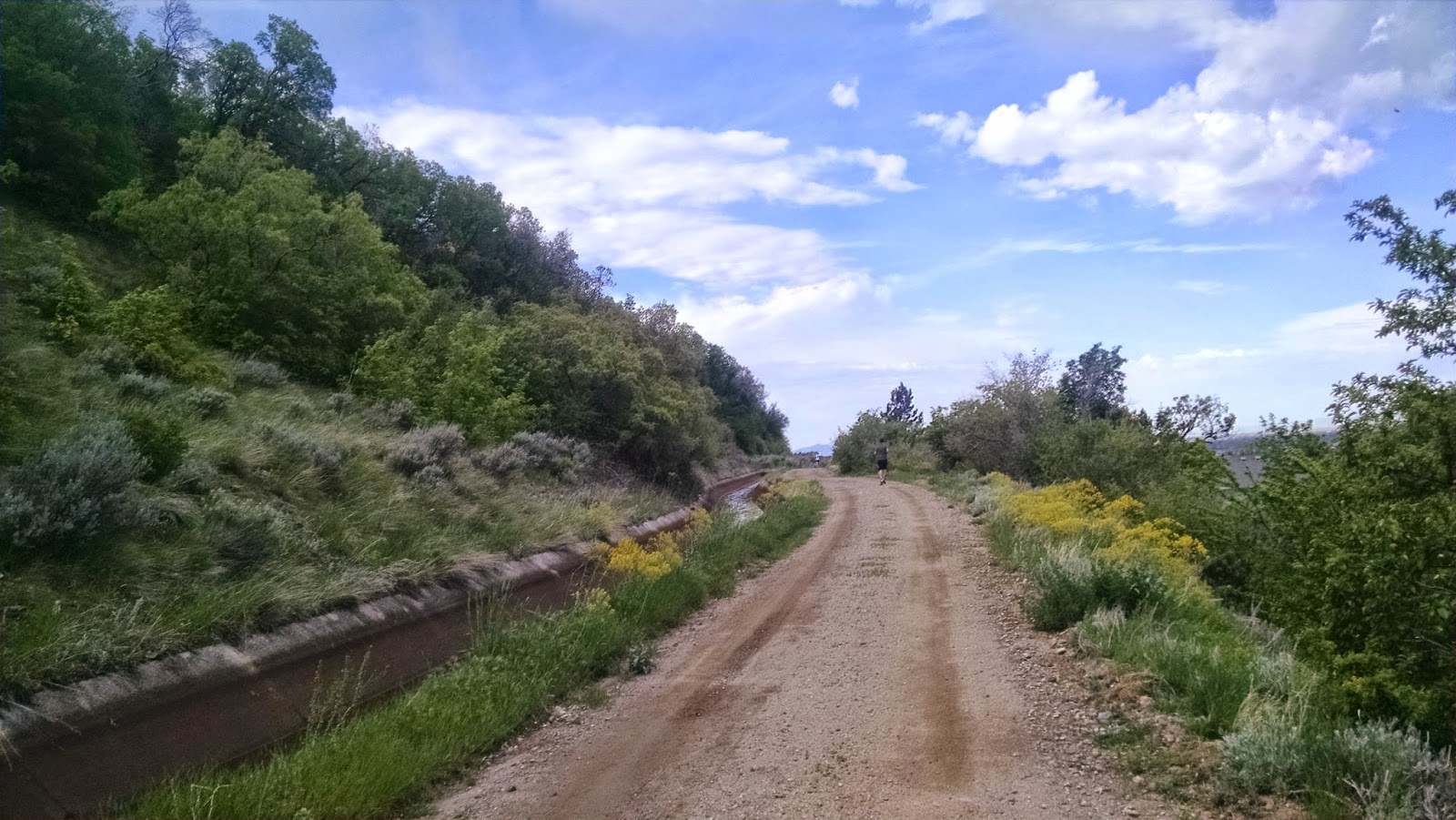 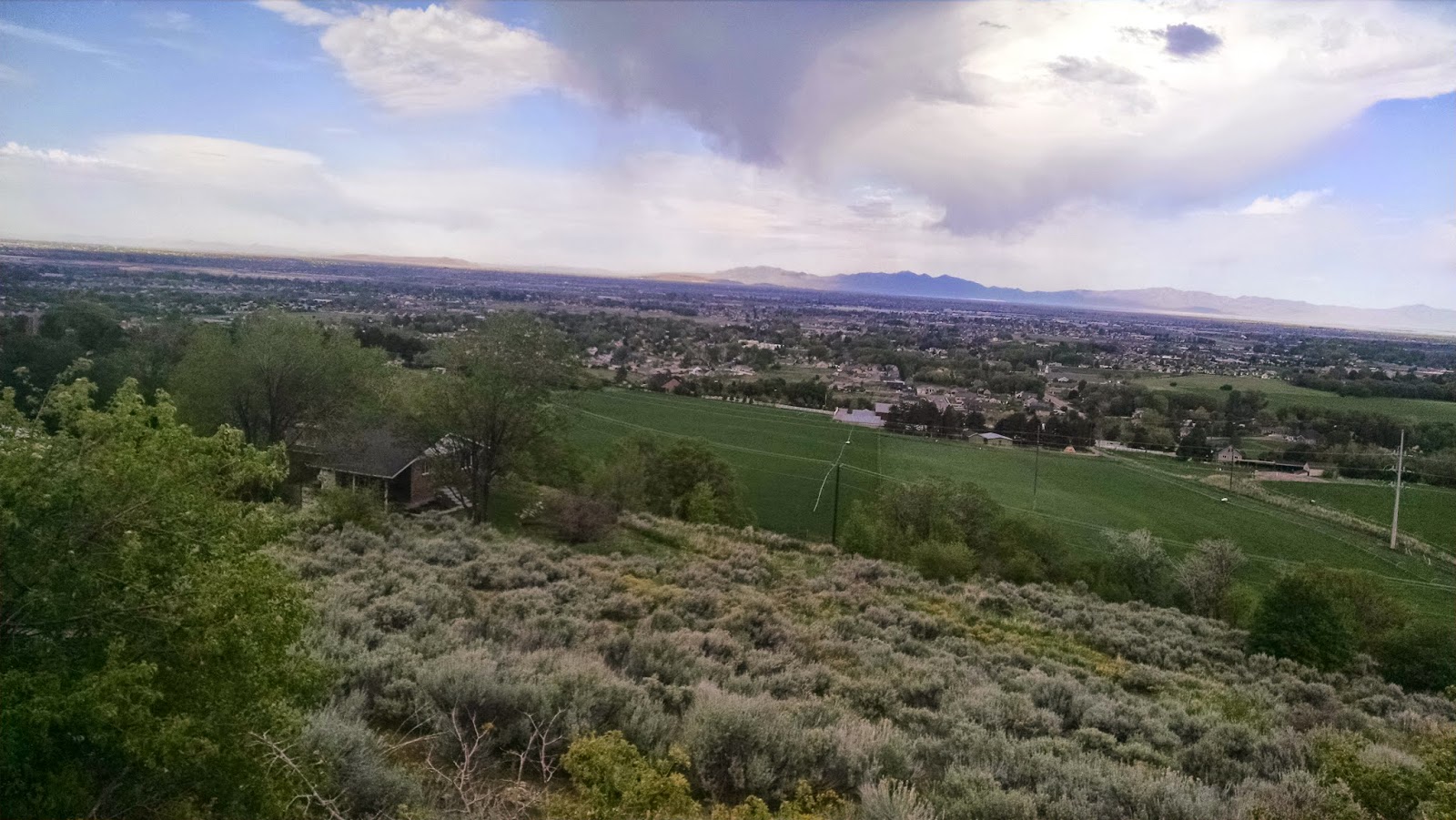 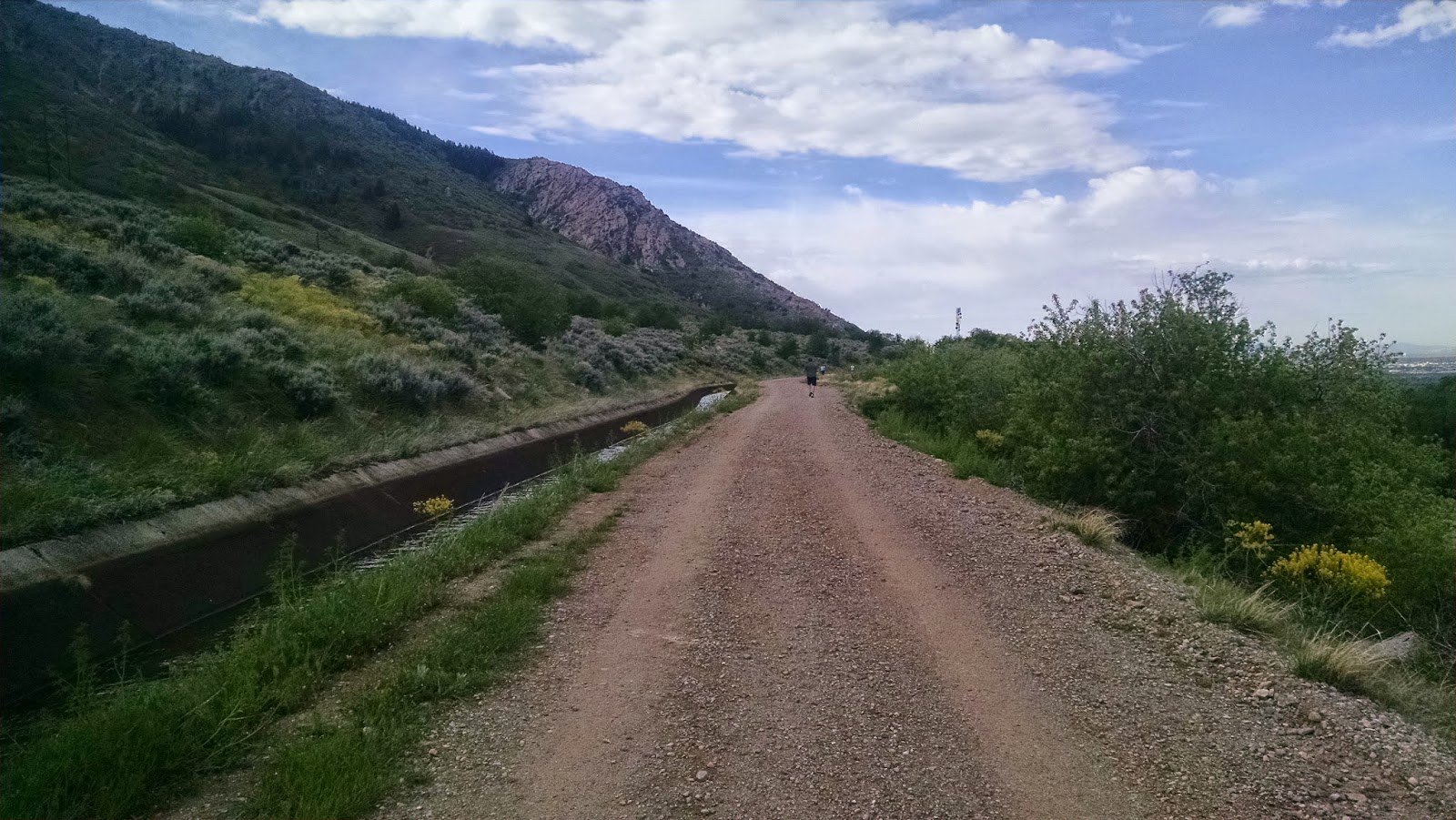 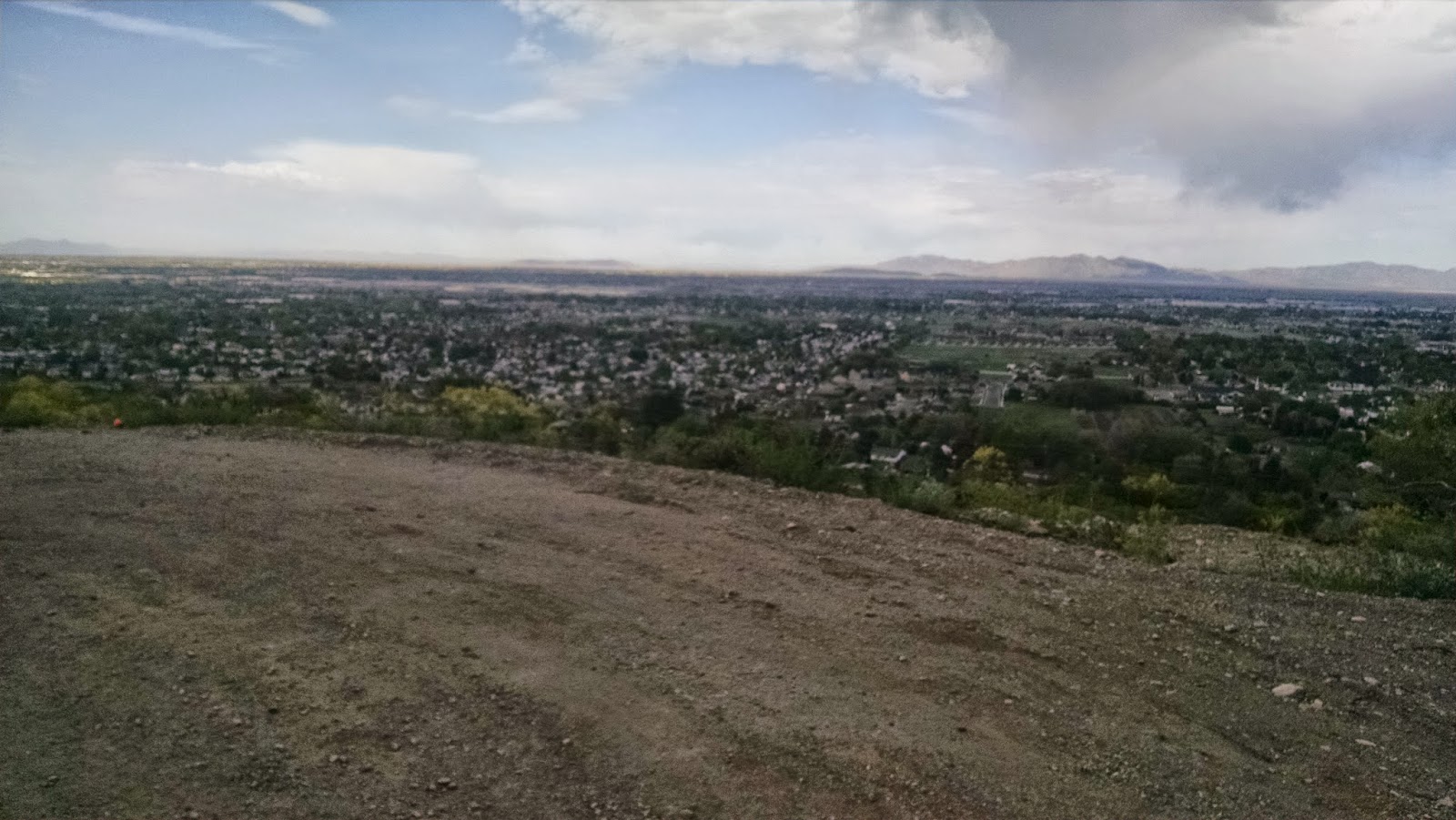 Also sometime during the trail session we ran into a hiking group -- that was about 50 fifty people in size.  They were really cool and gave everyone lots of cheers and high-5's.

Course support was excellent.  Usually at half marathons you get fluids every 2 miles, starting at mile 3.  This race had them at virtually every mile and always at the summit of a hill.  They provided water or an electrolyte drink (no Gatorade).  Luckily I brought a gel and took that at about mile 5.  I needed a caffeinated boost to power me through.

By mile 10 or so I was hurting and I knew it was going to be a slog to the finish.  I was completely trashed and my legs were responding.  Also, even the smallest incline felt like a mountain and I just tried to focus on my form.

I crossed the finish line in 1:59 and most everyone agreed that the course was slightly short.  I had set a goal of running as strong as I could and given the course profile, I figured I'd be pretty happy with under 2 hours.  Given how tough the course "really" was, I am glad that I managed to accomplish my goal. 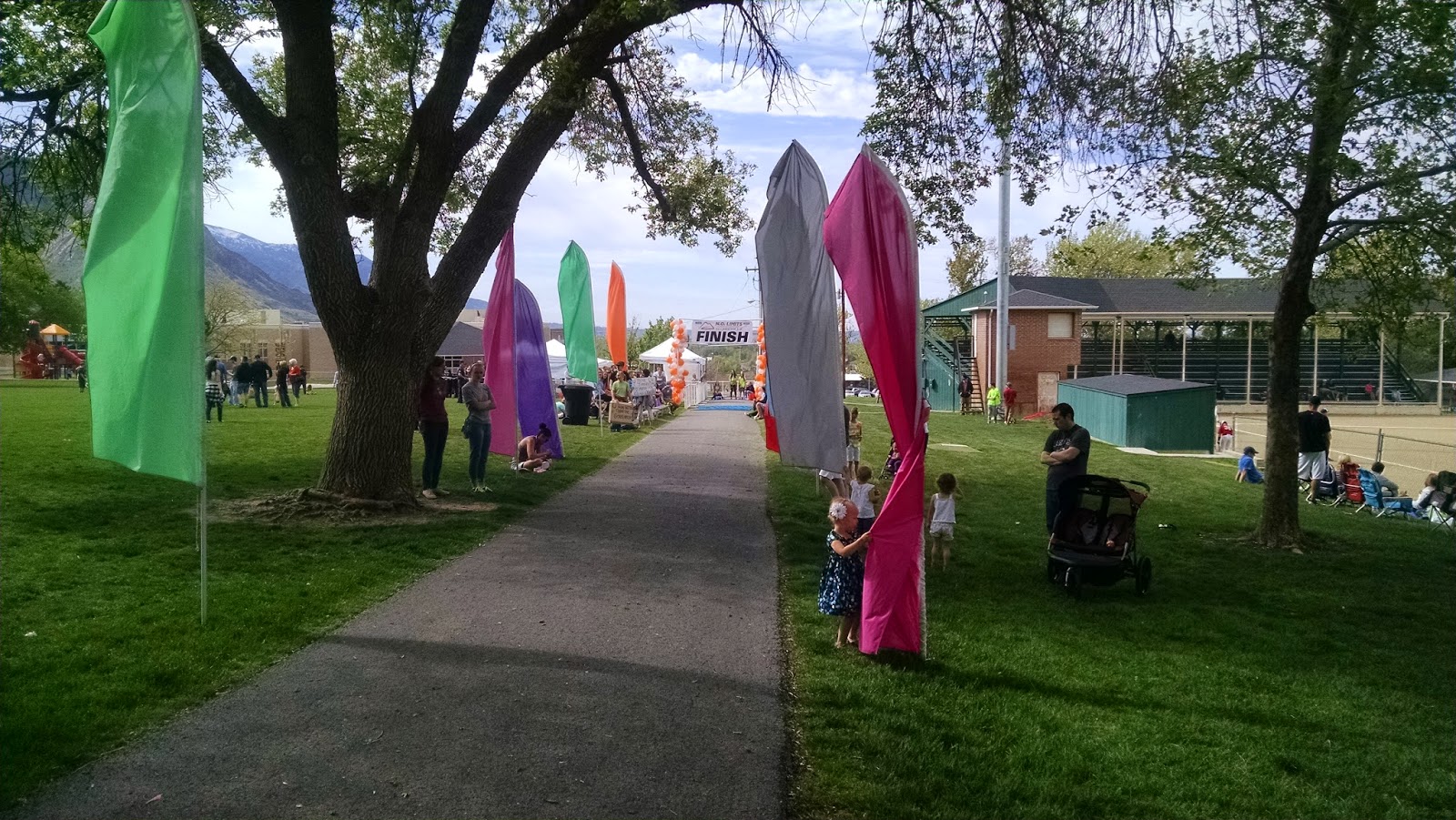 I was pretty shot after the race.  It took me a while to feel good and I wound up loitering around for a good 45 minutes.  I sucked down a couple of chocolate milks, a banana and some more electrolyte drink.  Luckily I brought my own Powerade in the car and wound up drinking quite a bit of that.  I still wasn't feeling right (even woozy) and I wound up stopping in at a gas station and fueled up and bought an iced tea.  I felt so much better after I drank a lot of that.

I'd definitely run this race again.  The price was right and they had a high-quality tech shirt and very very nice finisher's medal.  I suspect they did ten year age increments with only a 100 runners or so and I get the feeling they are trying to grow this race (it is in its third year).

The course is really tough but some of the views are outstanding.  I wasn't bored on this course at all but it wasn't easy.  This would probably rank up in the top 5 toughest half marathons I've done. 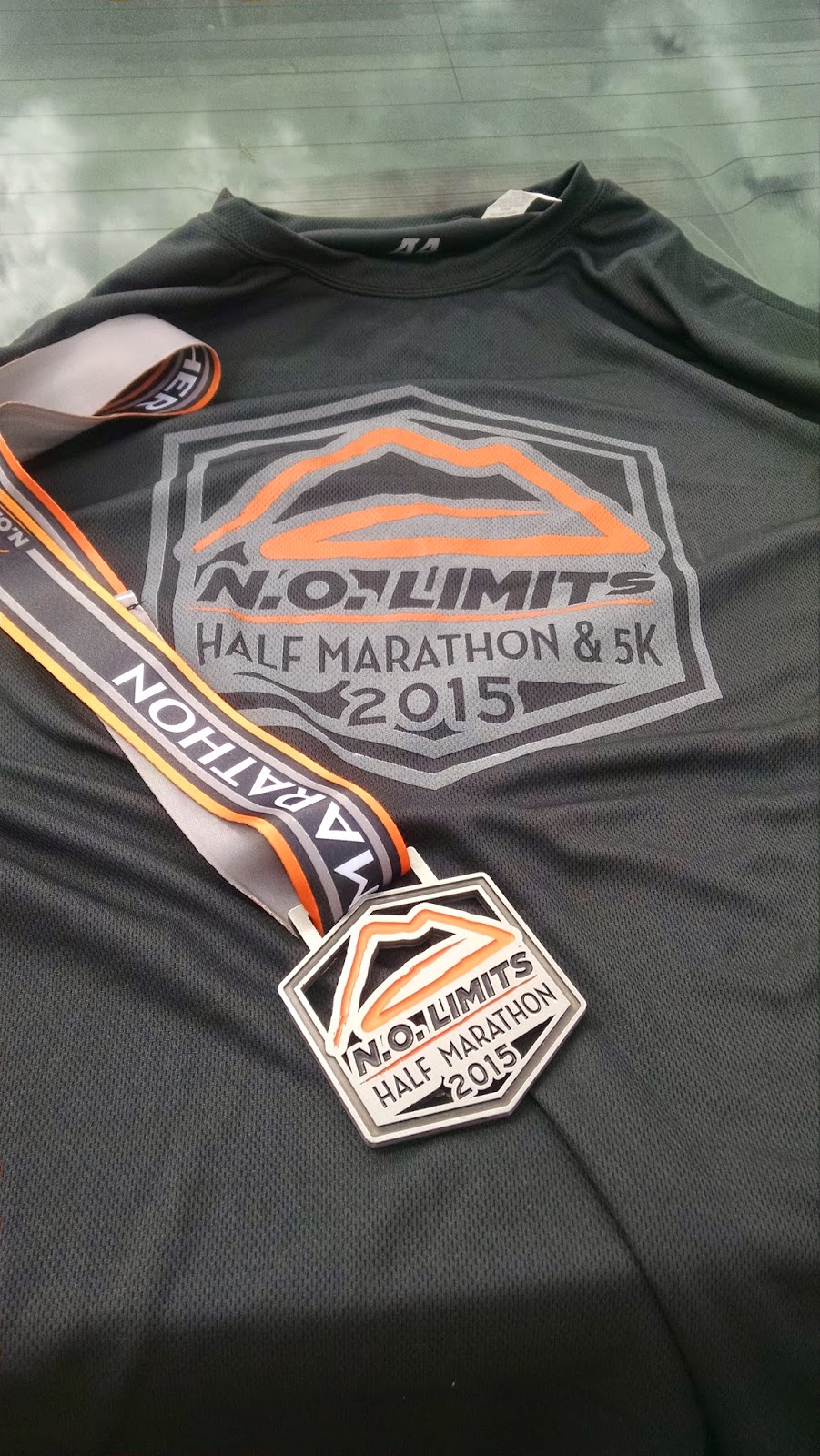 After the race I hopped back on the freeway and went to the Crystal Hot Springs in Honeyville Utah.  It was only another 20 minutes or more up the road.  With rain somewhat threatening, I think it scared some of the people away so it wasn't terribly crowded.  I wound up chilling for nearly 2 hours.  I was a wrinkled prune when I got out: 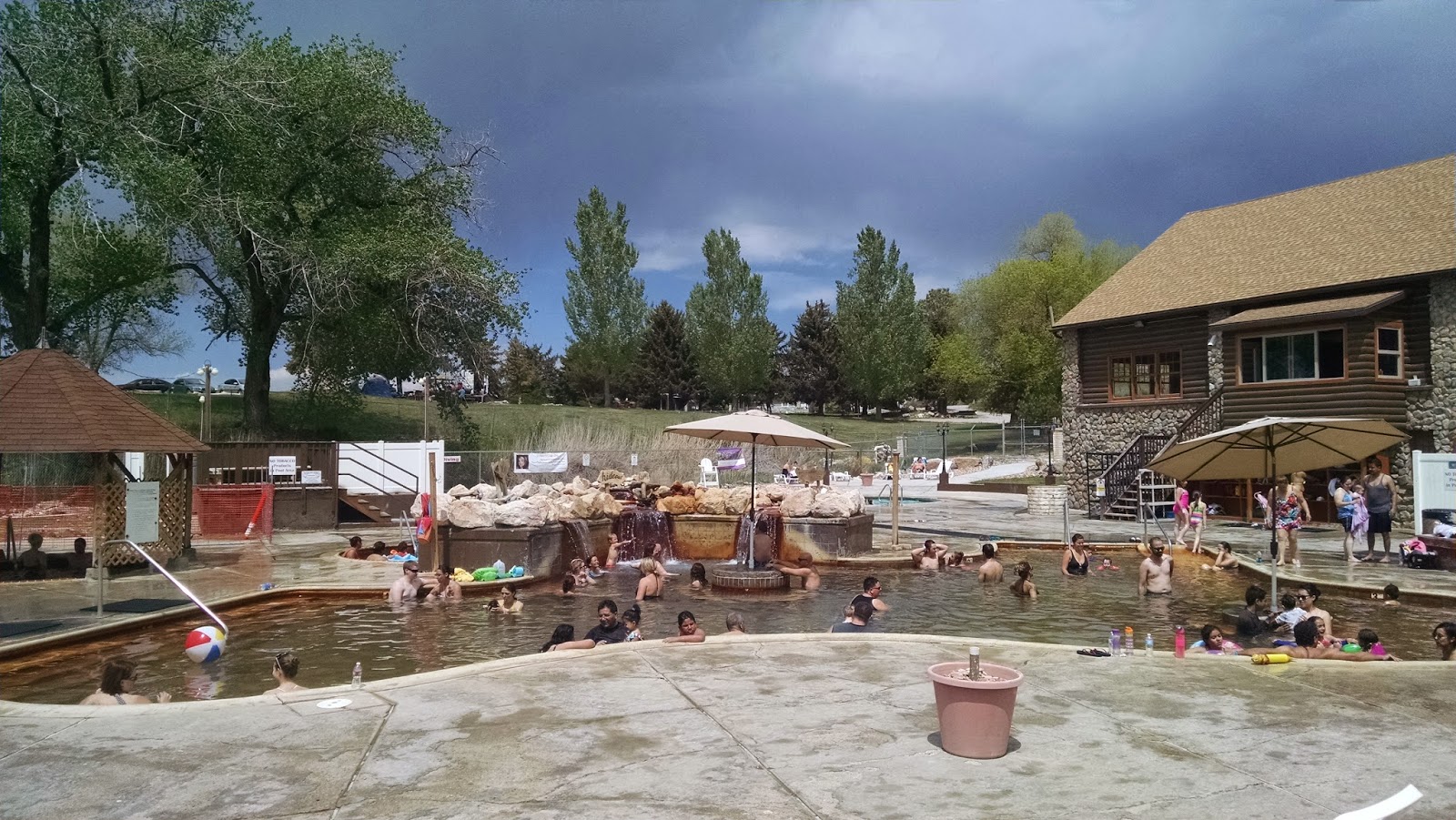 Finally I, of course, went to the Golden Corral in Layton.  I did justice to the buffet, but I didn't eat tons like I usually do.  I did gulp down a ton more drinks there.  I am glad they have free refills.