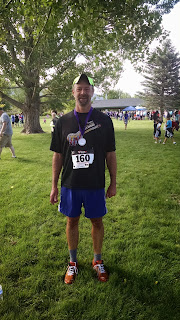 I've seen this race on my race calendar show up and I've never gotten a chance to do it. I've always got a marathon planned or a "bigger" race during this time and it just never seemed to work.

However, with 2015 being the year "I run all the races" I decided to pony up $40 some odd bucks and jump into the 10K.  I was definitely looking for something to do and anything to get me out the house would suffice.

I don't think my legs would've held up in a half marathon situation so a 10K worked out nicely.  A good amount of speedwork coupled with some distance.

Also, West Bountiful, the race's location, is flat.  I think I've run on most of the course's spots at some point during the many races I've done in the Bountiful area. 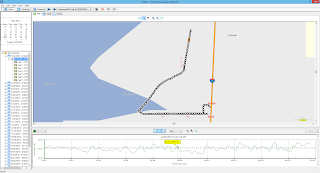 
I rolled out of bed at 5:30 and had my pre-race meal of Wheaties, an Arnold Palmer and a can of beets.  I wound up killing some time around the house before taking off at 6:30.  I got to the race site at about 7:00.  I am glad I gave myself some extra time as they are doing construction and I wound up missing my turn once I got into Bountiful.  Let's just say I took the scenic route to the race's location.

I picked up my bib / t-shirt without any problem and sat in my car until 7:45, when I began some light jogging and drills.

At this point it started to drizzle.  I definitely wasn't looking forward to a downpour, but a drizzle I'd love.  However, it did stop by the time the race started at 8AM.

The race started a little late.  Being that the race had a 5K component as well as a 2 mile walk, there were a lot of rookies.  I think people hadn't anticipated that it would take a fair amount of time to get their goodie bag, timing chip, t-shirt.  I would also guess the great majority of people were casuals but they did have a good crowd.

My goal was try and get under 49 minutes.  I wasn't sure how my post marathon legs were going to hold up but the weather situation as well as the flat course made it feel like it was doable.

The first two miles went by pretty quick and when I hit the 5K mark, my marathon-tested legs felt like they were just getting warmed up.  The distance felt like child's play, but the pace was definitely punishing.  How long would I be able to hold it?

After running 26 miles the week before, running 3 seemed so much easier.  However, what makes the 10K so challenging is that you are definitely pushing the pace, so the pain level is definitely upped a notch.

Mile 1 was on a residential street without a lot of traffic.  They had the corners and main traffic points manned, which was good.  Around mile 1.25 we jumped on the Legacy Bike Trail.  I've run a TON of races on this, so I knew exactly where I was and what the bike path was going to do.

However, what I didn't count on was how BAD the gnats were going to be.  They seemed to be even worse on the way back and around mile 4.5 I got one lodged in the back of my throat (after getting them lodged in the eyes and face).  I tried to clear my throat and get it out, but I was rewarded with a bout of the dry heaves!  Aha -- just like I had experienced at the Ogden Marathon.  I pulled off the course and tried to throw up but it wouldn't come.  I had to slow my pace and I never really seemed to recover after my rhythm was broken.  I suspect that this cost me an age group award, as the next guy ahead of me finished within 11 seconds!

The course was an out and back and I couldn't tell how many 40 - 49 year olds were in front of me, but I felt like I had a shot at an age group medal.  However, in the last mile, two guys my age drifted by.  In fact, the three 40 - 49 year olds that finished ahead of me were all within shouting distance.  So I was doubly pissed about the gnat situation.  I deal with gnats every day on the bike trail near my house, so I should've known better.

I wasn't really sure what my performance was going to be on this race.  Usually you aren't supposed to race for a good month after a marathon, and here I ran a fairly normal training week plus a race.  My pace felt really solid and in control for the first three miles.  I think the bothersome bugs threw me off my game as I was on fire working on solidifying my position and gaining on the folks ahead of me.

They had a lot of post race vendors and even some popcorn, but being that I was so close to my favorite Golden Corral, I just sucked down on a water, chatted up a few people and took off.

I'd do this race again.  If I had run the 5K I would've easily nabbed an age group award, but I definitely wanted to run longer.  I liked the course and there was no confusion as to where to go.  They had plenty of volunteers on the course.  I was also happy to get a finisher's medal.  The t-shirt will probably be donated. I have a gazillion t-shirts and the cotton ones are more or less used as pajama tops these days.

Overall, I am satisfied with my time.  It could've been better but it is on par with all the other 10Ks I've done this year.  Also the race supported a good cause and I was glad to take part in it.
Posted by Eddie Gaul at 12:40 PM