In 2012, I did the South Jordan half marathon (actually their summer and fall race).  Being that I was new to Utah at the time, I really fell in love with South Jordan.  Clean area, plenty of shopping, a tech area that looked like it had plenty of jobs, etc.  However, it is one of the pricier areas and it also looks fairly homogenized and too well planned.  Also, with it growing as rapidly as it has, it looks like if you live on the west side that it is a battle to the freeway each morning.

Either way, I was looking to do a warm-up marathon of sorts before next month's Vegas.  Knowing that the folks in South Jordan put on a well-organized, small race, I opted to give this one a go.  I had a coupon that got me 10% off, so I wound up paying about $88 for the race, including service charges 2 weeks from the race start. Not a bad deal. 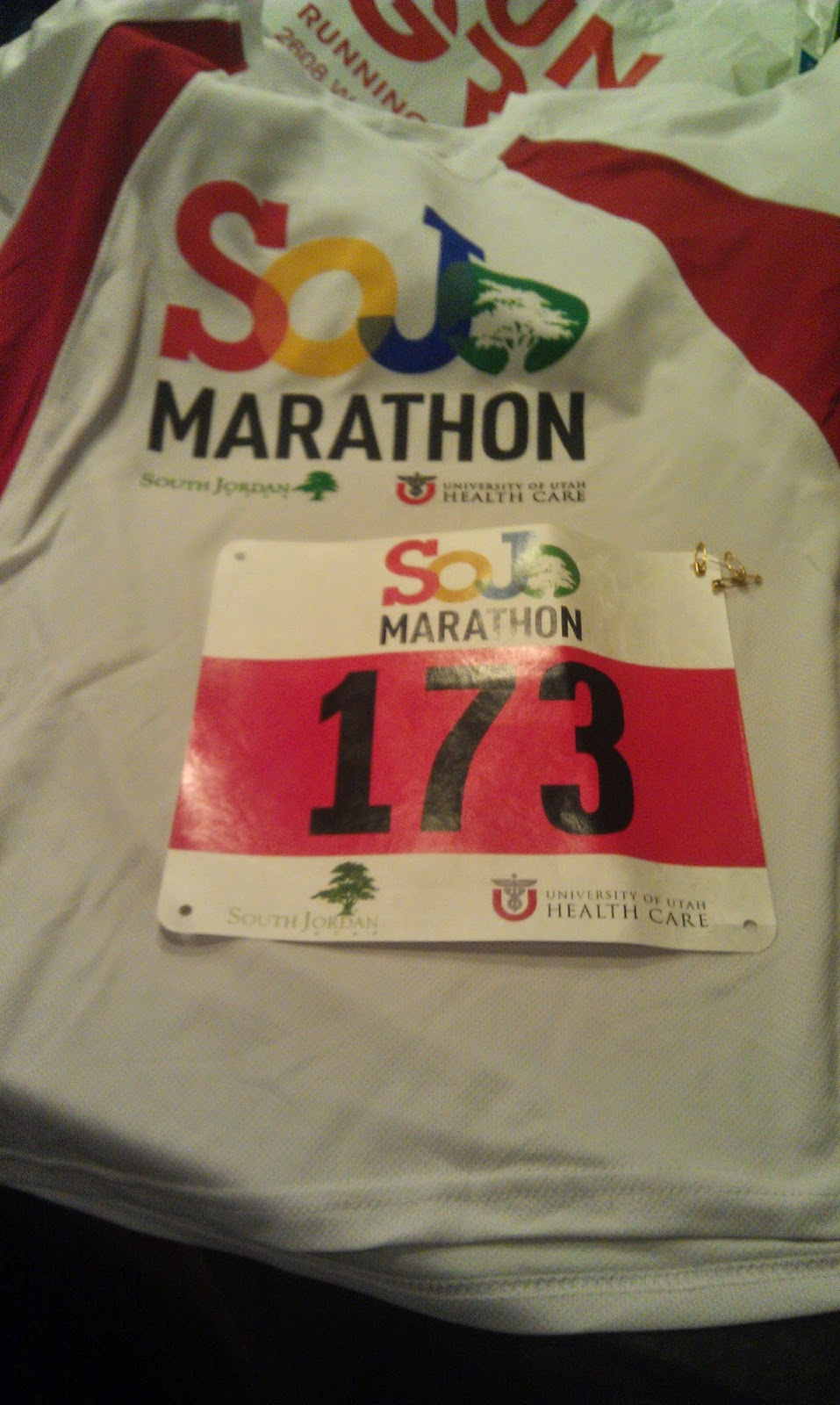 Packet pickup was a snap.  I drove about 4 miles from my house, went to the rec center and a few minutes later I had my shirt and bib.  It was actually a pretty nice swag bag for such a small race.  Plenty of little extras in it, including a free gym pass, which I'll definitely use.  There were no exhibitors there, just a room with some volunteers registering people and giving you your stuff.

Since this was a local race (attended by mostly locals), I didn't need to travel very far or get a hotel.  I actually slept well and had very little pre-race anxiety.  I am not sure if this is a good thing or bad thing.

I did get up at 4:30, ate some Life Cereal, banana and an iced tea before heading out the door.  I had to catch a bus at 6AM.  The bus took off about 10 - 15 minutes later and we arrived in Brigham City about 6:40 or so.  Brigham City looks like an old city that is in the middle of nowhere.  No gas stations, no grocery stores, just a cluster of small houses that appear to have been built in the 1950's (or earlier).  I had never been out in this direction before and it is all mining country.

They do have a beautiful park though called Copperton City Park and that was the starting area.  The race directors had a few porta potties out there as well as some heating lamps.  I was pretty comfortable and the time before the race started went by pretty quick.  I drank a bit of water and ate a Powerbar to top off my energy stores.  The race started promptly at 7:30 just as the sun was coming up. 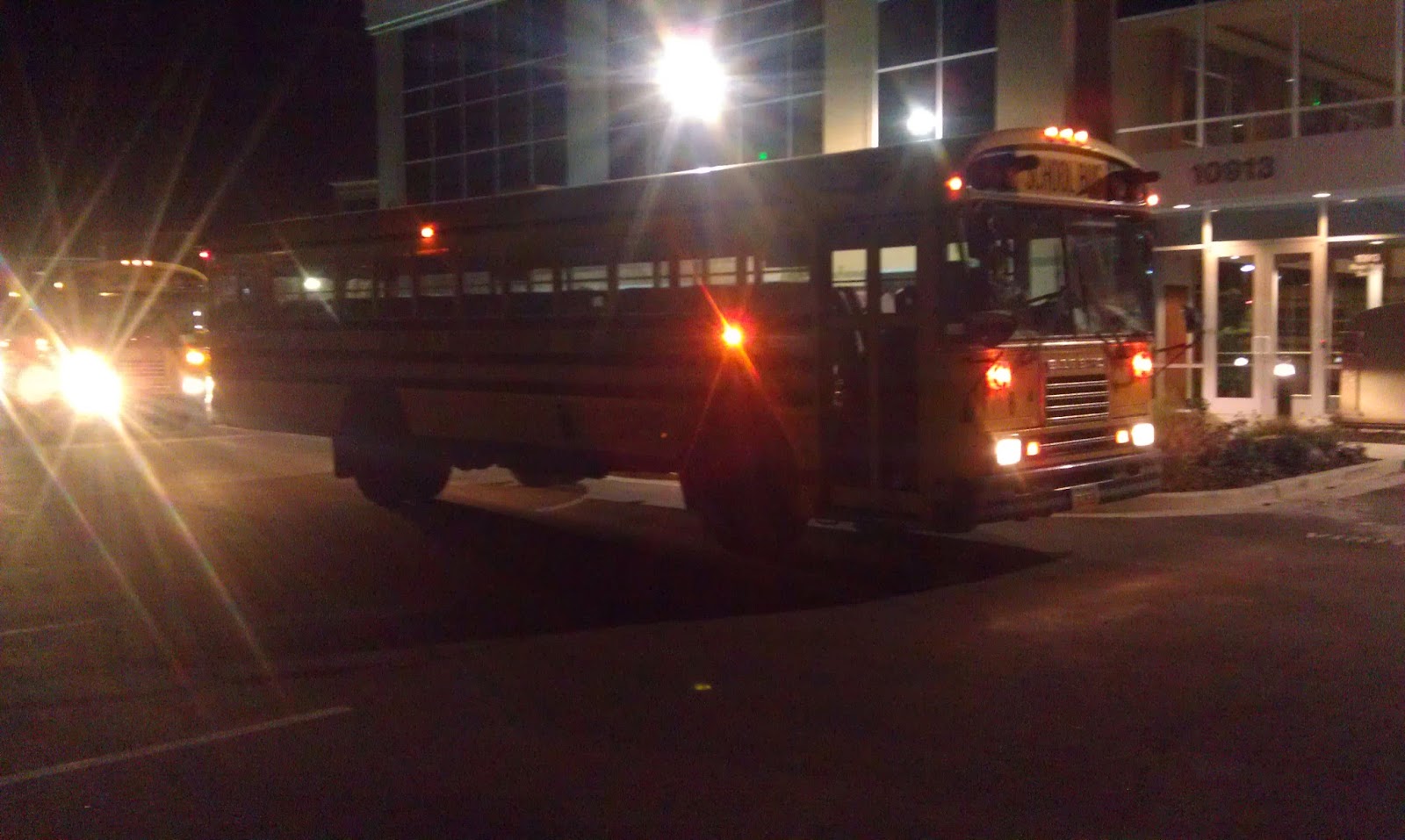 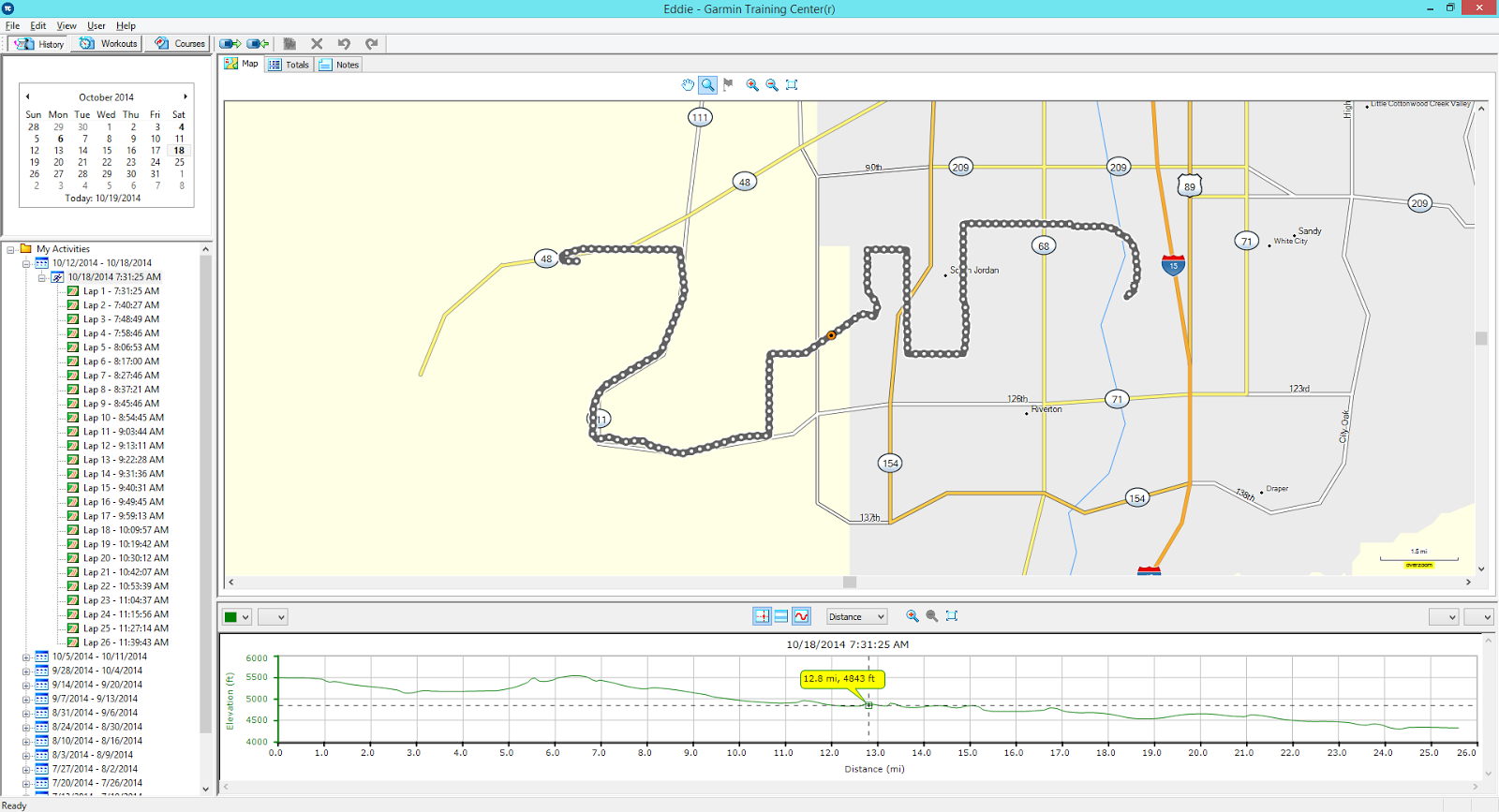 A good portion of the race is downhill.  The race boasts a net downhill of about 1000 feet.  Sounds good right?  Well, there is also one climb of 500 feet early in the race and in the middle miles there are some hills too.  So this course is NOT flat.  You can see the race profile here. Just click on a mile marker to get the elevation chart to come up.

It was very hard to maintain a consistent pace in the early miles.  I went with the downhills and just rolled along as best as I could.  Around mile 5 I had the urgent need to pee and I jumped in a porta potta (the weeds along the side of the road were looking pretty good up to that point).  Took forever to empty my bladder.

The first 10 miles or so are actually the best part of the race.  Just a whole lot of nothingness and it is all downhill.  I found it very pretty and enjoyable.  Despite having lived here for over 2 years I haven't explored this part of town.  It was a beautiful stretch of area from Brigham City to the outskirts of Herriman.

Once we got past 10 miles though, it changed to more city street running.  The race officials had done a terrific job of protecting us and having plenty of traffic control.  I never worried about the Saturday traffic.

Surprisingly, I caught up to the 4 hour pace group and managed to latch onto them.  I know that was aggressive but there were over half a dozen of them (this was a small race, only about 200 full marathoners) and I wound up hanging with them until mile 14 or 15.  If I had been with them, I probably would've run the majority of the race solo.

Things started to go sour though when I hit the Jordan River Temple.  There is a ghastly hill that you have to ascend to get by it and it just sucked the energy out of me. It is only about 100 feet of a climb, but it seems to be a lot more.

Crowd support is pretty minimal as well, mostly consisting of locals cheering on a family member.  If you are looking for rock bands or huge cheering sections, you won't find it except at the finish line.

The race also had done a fantastic job at organizing the water stops.  There were 3 in the final 3 miles -- much needed.  Most stops had gels so I only had to use one of my own.

The weather was in the low 40's and near the end I was baking in the sun.  I had run with a Fuel Belt and had gone through 28 ounces of Powerade and was double drinking at each of the water stops after the half way point.  That may have been part of my downfall is that I wasn't getting enough fluids.

The race became a slog to the finish after mile 20.  Blame it on going out too fast or being under trained.  Despite having some fantastic training runs, today wasn't "my" day.  I think I would've done worse had not the last few miles been downhill.

I crossed the finish line in 4:22:50.  I wasn't terribly thrilled with my time, but it was my 13th marathon and I good indicator of where my fitness lies and what I need to work on.  Plus a finish is a finish.

My achilles was sore in the early miles and my right knee was bothersome (I think the downhills but some pressure on it) and my calf would occasionally give me problems too, but overall I was able to finish without significant damage.

The medal was pretty sweet too.  It is pretty heavy and high quality: 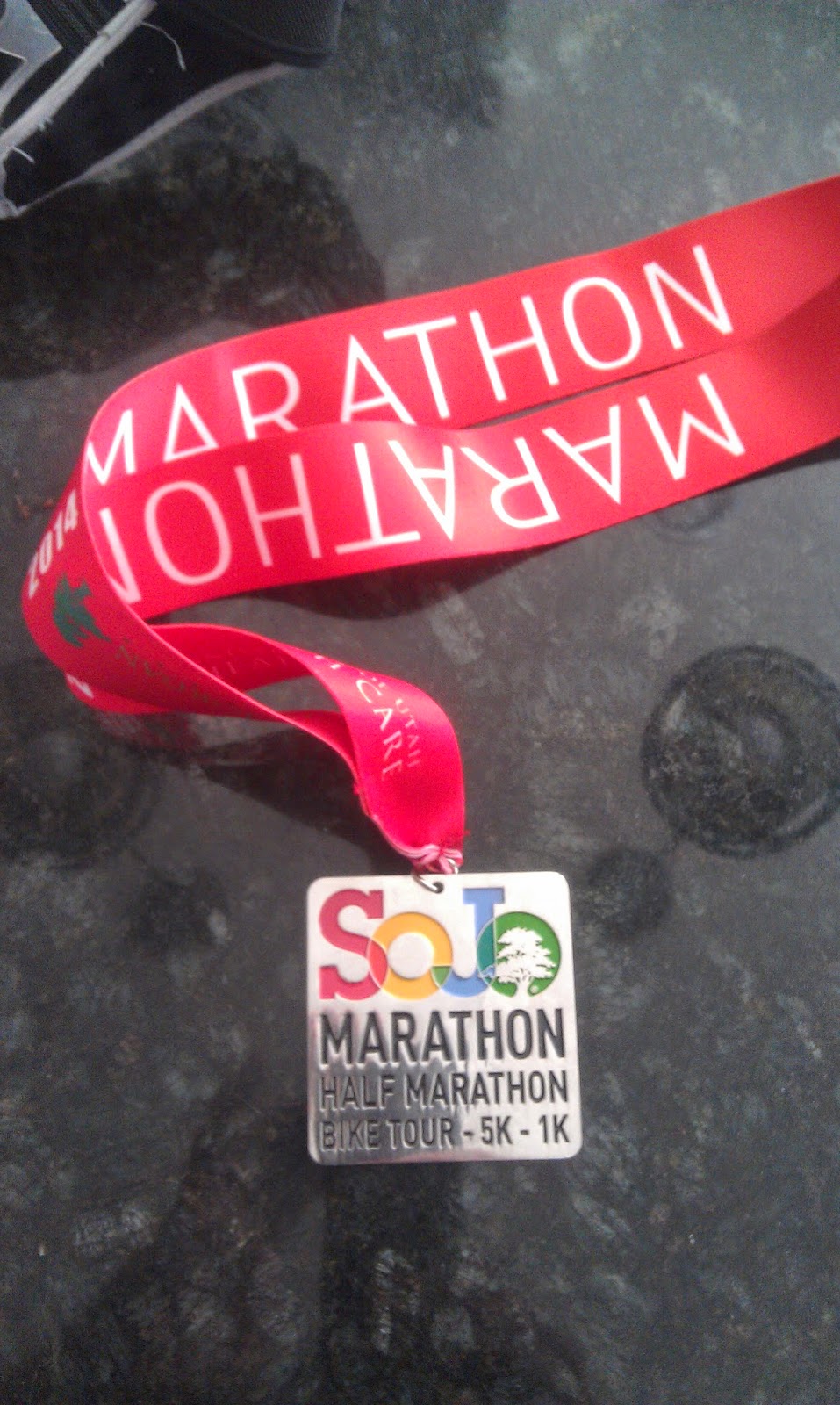 I walked around a little and grabbed a water and Doctor Pepper. Since my last two miles had almost been at a walk anyways, I found a place to sit in the shade and just waited for my stomach to settle.

The post race food was pretty basic and a little disappointing:  Chik-Filet sandwiches, bananas, ice cream sandwiches, oranges and Dr Pepper.  They did have a lot of exhibitors though and activities for kids, including rock climbing.

When I had finished, there were plenty of post race goodies but most of the people looked like they had already left, so it was a bit anti-climatic. 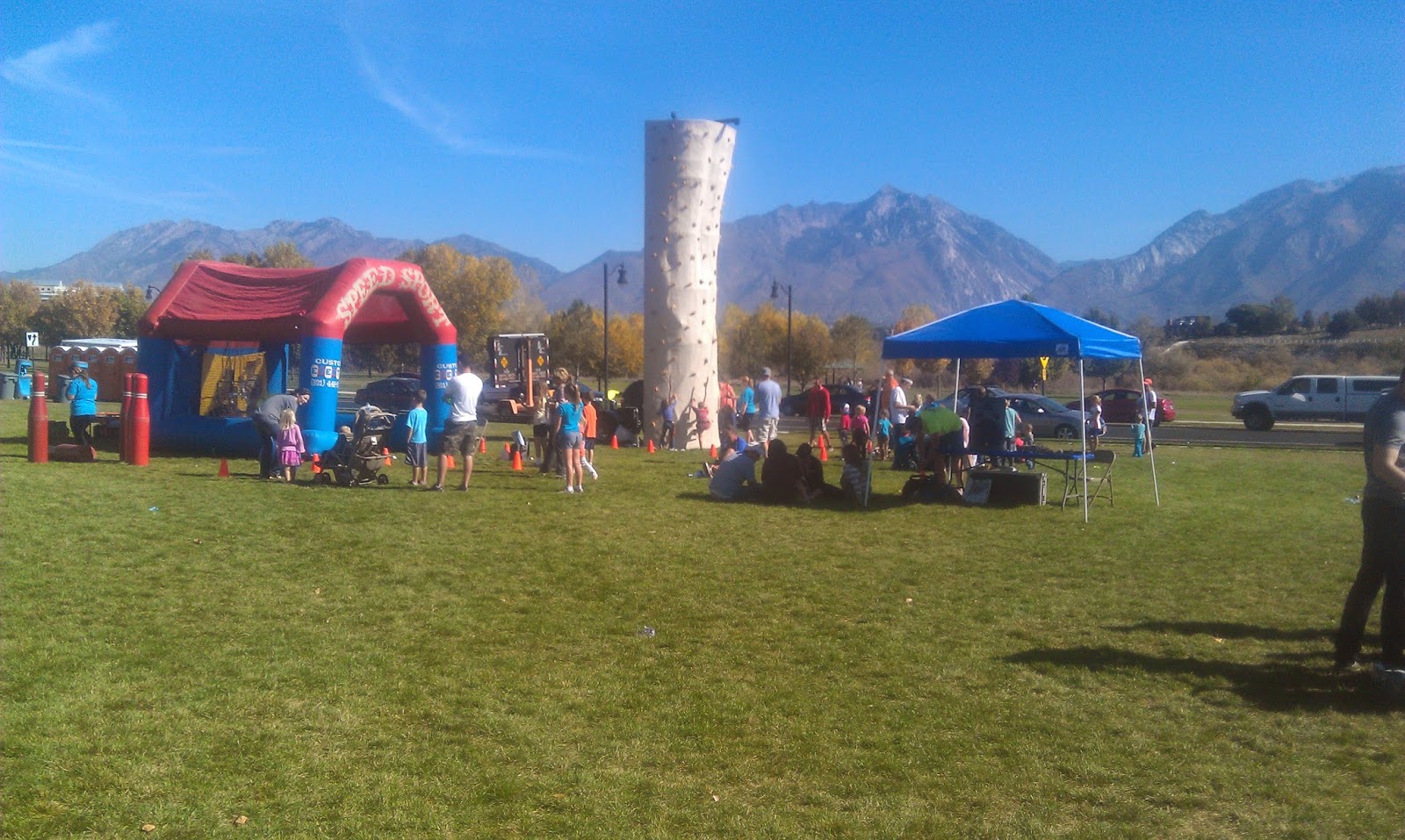 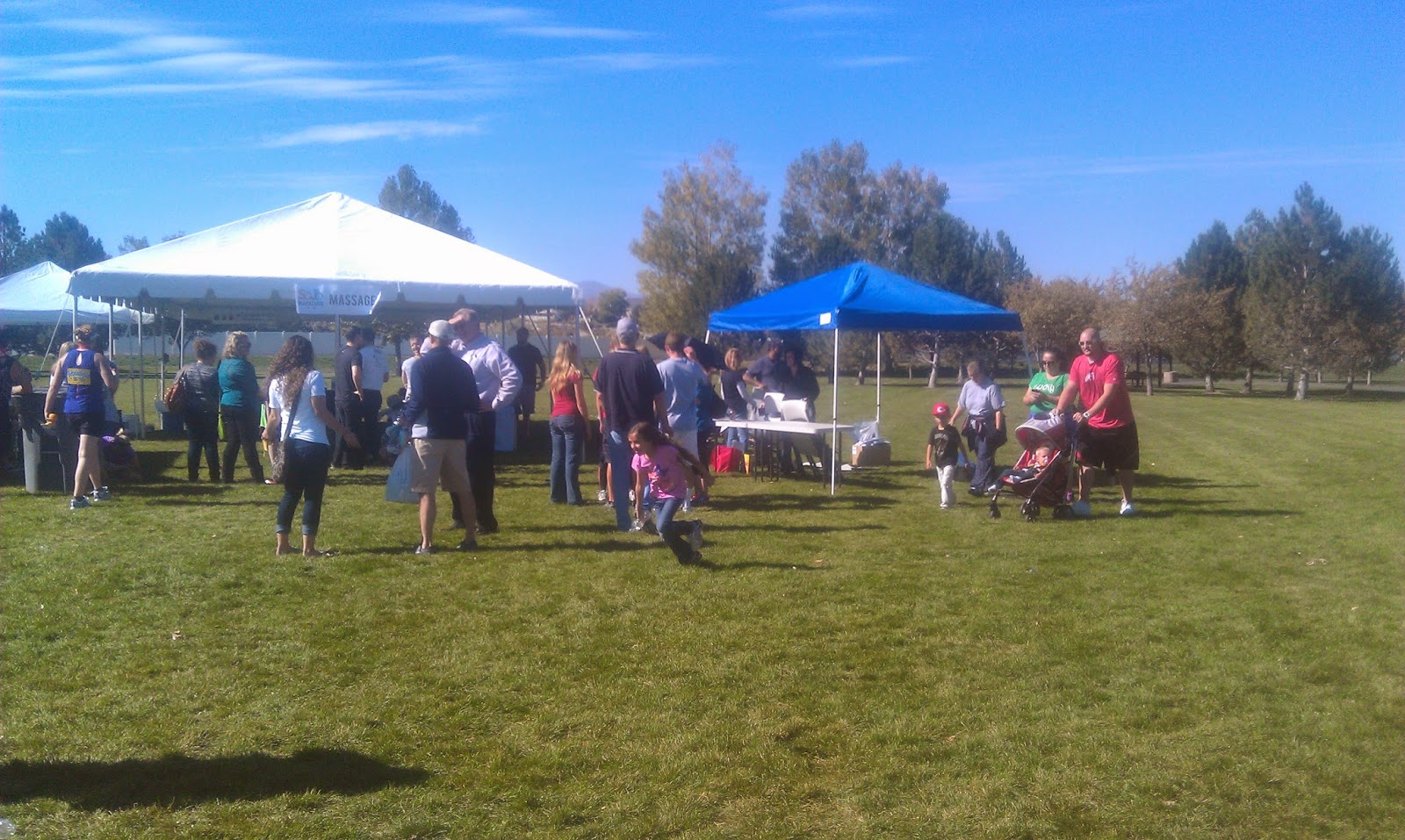 Afterwards I hit up Cafe Rio and normally I can pound one of their burritos and be hankering for another.  However, my stomach was pretty upset and I only managed to get about a 3/4ths of it down.  I did suck down 3 Vanilla Cokes though, which was heavenly.

I came home and did what the pros do after a marathon: ice bath time!  It seemed to help but to be honest I couldn't get it cold enough. 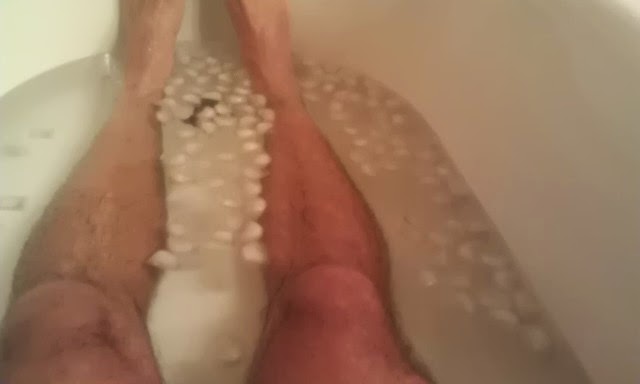 I was also treated to some solid calf and foot cramps.  Luckily I had pickle juice on hand and managed to get about a cup of that down and sure enough the cramping subsiding.

Later that night, Shari and I found some Groupon.com coupons for Golden Corral so we hit up that.  My appetite still wasn't 100% but it was good to eat a lot. 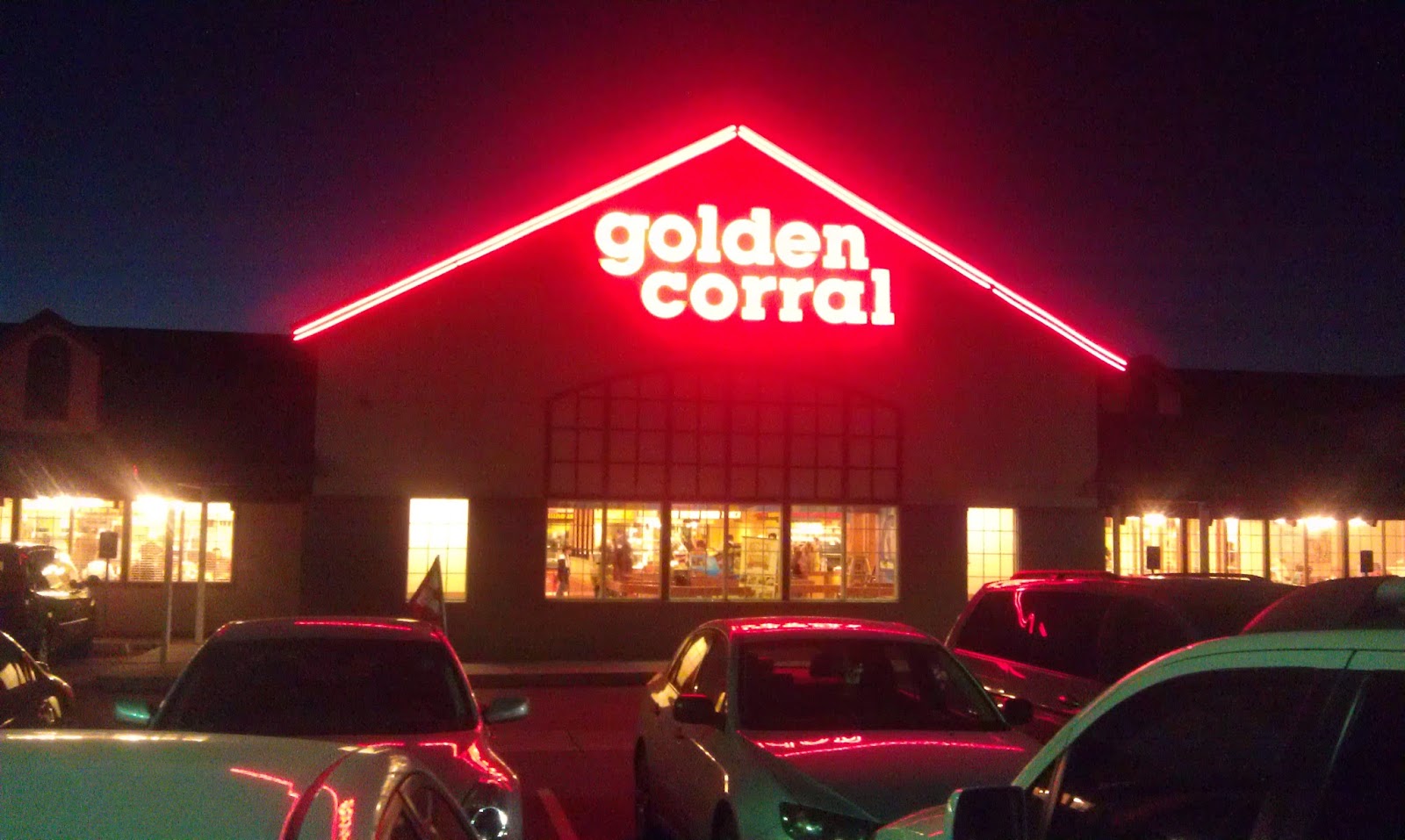 I would definitely do this race again.  It is local and reasonably priced.  It is only about 15 minutes from my house and it is a high-quality event.  That being said, if you are researching this race and wondering if you should travel to it, I'd probably say no.  There are other races in Utah that offer fantastic views or something to get excited about in terms of scenery and ambiance.  However, if you need to get Utah off your states list and this fits your plans, by all means you won't be disappointed.
Posted by Eddie Gaul at 8:51 AM