I know -- normally after a marathon you are supposed to take about 3 weeks off from running, let along racing.  So what do I do?  I sign up for a half marathon.  Yeah smart move, but let's face it, I've been a race junkie for a while and if I am feeling good, why not roll with it?

I found the Halloween Harvest Half for Saturday morning (10/25/2014) and it was a bargain price of $50.  With a $5 coupon I found on their Facebook page and I was set.  How many times do you find a half marathon, one week from the race start costing a whopping $48?  Not too often.

I knew I wasn't going to be super competitive in this race.  One, I had no idea what I was able to do given that I had just finished a full marathon and two, the age groups were ten year increments.  When I rolled in, I saw a bunch of whippet-thin 40 year olds and I knew there was no way I was going to place anywhere near the top 3 in my age group.  So right off the bat, I was using this as a mild tempo run / long run.  It was sort of nice to take the competitive edge off myself and just enjoy the race and try to run even splits.  It also gave me an opportunity to toy with new racing strategies. I wound up using a gel at mile 7, which normally I don't use for halves.

I rolled in at about 7:30 for the 8:30 start at the race's location: Black Island Farms.  Located just south-east of the entrance to Antelope Island, Black Island Farms place is an agro-tourism place.  With the fall harvest in full swing, they had a corn maze, animals and all kinds of kids activities.  Also because they get a lot of people visiting they had PLENTY of porta-potties.  No lines at all, ever (major props).

After picking up my shirt and swag bag I wandered around the grounds and snapped some pictures of the animals and the grounds while hardly anyone was there:

Afterwards, I sat in my car and listened to the radio until the 8:30 start.  I would guess there were about 125 runners there, again mostly women (looking at the results, there were about 50 guys, and 75 women).

The course is fairly flat throughout and the only hills on the course were little "moguls" on the bike trail.  There were some occasional stretches that felt like we were slowly ascending, but for the most part, this course could be qualified as flat (I think it was listed as having about 56 feet of elevation climb).

The first 4 miles or so are on city streets.  It is rural / farm land and the few busy intersections were manned by police.  I did almost get taken out by a woman at mile 9 while I was in the crosswalk.  Utah is absolutely TERRIBLE when it comes to pedestrians rights when dealing with cars.

I felt it was easy going and I latched onto a few different people and just kept checking my Garmin, hoping to stick to an 8:30 - 8:45 pace.  Usually I get sucked into an overly aggressive pace and I wind up paying a price for it at the end.

I had to go to the bathroom almost from the start. Perhaps my strategy of using iced tea before the race isn't the best idea as it makes me want to pee like crazy.  Unfortunately the porta potta at the mile 5 water station was occupied and I wasn't going to wait.  About 3/4ths of a mile later, I found a cement outcropping along the bike trail and I was far enough ahead of the guys behind me that I ducked behind it and took care of business.  It probably cost me a good 30 seconds though.

I definitely prefer the Murray bike trail over the Layton ones.  I didn't see a single bathroom / drinking fountain along it (granted Layton is a small municipality) and there wasn't much shade.  It was just a lot of scrub with views of subdivisions and once in a while you could see Antelope Island in the distance.

Also, as I made my way south along the bike trail, I was hit with a headwind.  I've run through some intense wind before and this wasn't that bad, but it was enough to make the latter miles difficult.

The course wasn't hard to follow and it was well marked.  I was running solo, however, and at times I was worried I was still on the course.  The water stations were at 2 mile increments (starting at mile 3).  My Garmin was basically saying most of the mile markers were long by about .05 miles, but by the time I finished, the race measured out to be exactly 13.10.

Crowd support was fairly minimal.  They did have an announcer calling people's names as one crossed the finish line and other than a few people sitting in their yards watching people run by, there wasn't a lot going on.  However, the water stations were well manned and kept me fueled.

The last two miles were really mentally hard.  It was down a farm service road and there just wasn't much to look at except brown fields (and a bunch of farm hands manhandling cows into their pens).  At this point I was hurting, but I knew I had the endurance to finish the race.  My pace had slipped from the "easy feeling" 8:30s that I had started with, to the mid 9's.  However, I felt I ran a fairly even race without too much of a death march at the end.

Interesting note, that I ran last week's full marathon and reached the half way point in just under two hours and here, I am running a half marathon and I finish with nearly the same time.  Chalk it up to South Jordan's downhills.

After finishing, I grabbed my cool finisher's award.  I was totally expecting yet another medal, but this is something that I can actually use: 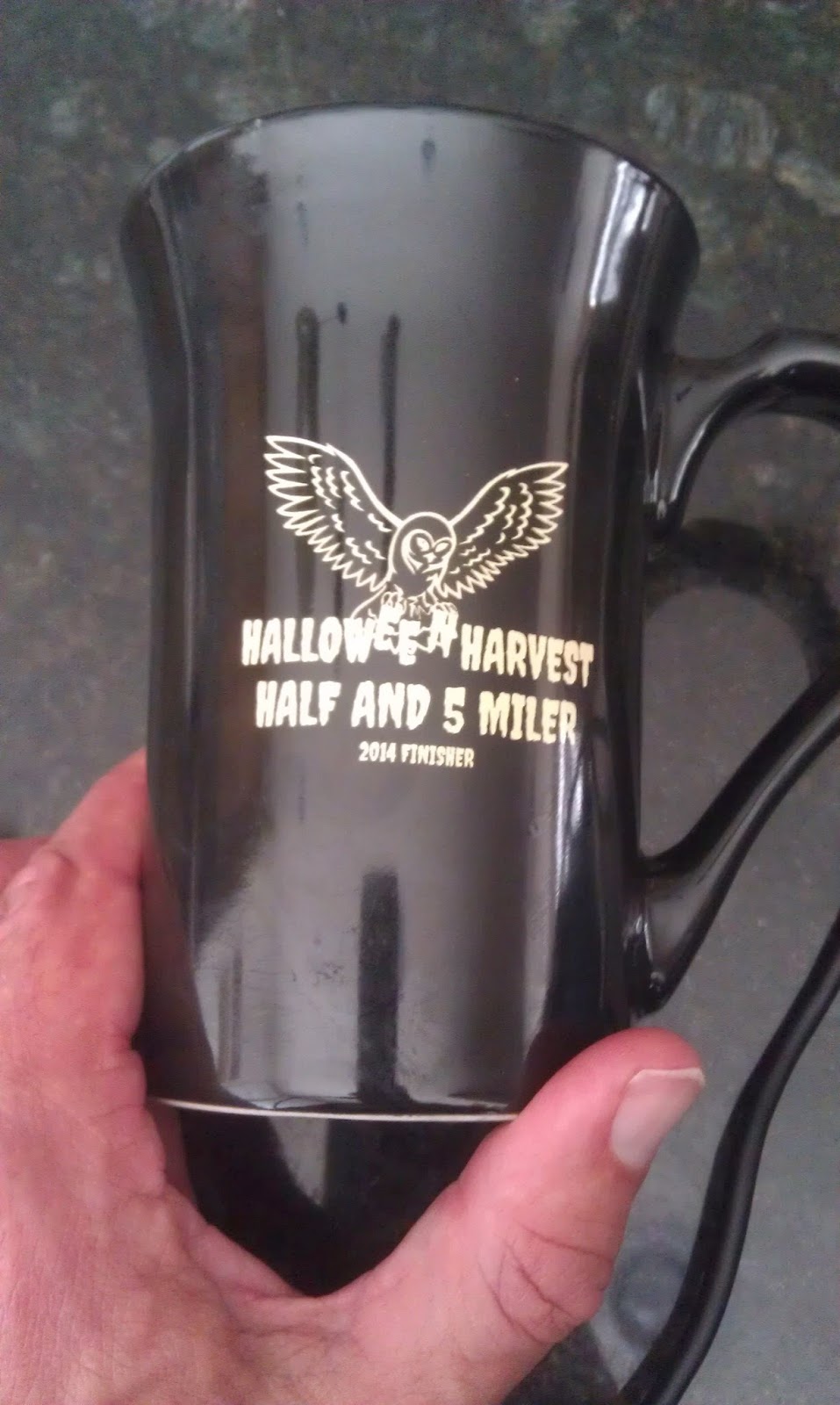 I also spoke with the race director and personally thanked him for a nice experience and keeping the price down.  He wound up giving me a free Road-Id gift certificate.  How cool is that?

Post race refreshments consisted of fruit, cookies and snack bars.  They also had plenty of chocolate milk which tasted absolutely awesome.  They also had sports drink and water.

I wound up killing a lot of time at the farm.  I chatted with random people and swapped race experiences.  They had a ton of different animals and surprisingly for a nice day, it wasn't a madhouse with kids.  I probably should've done the corn maze, but I was tired and didn't feel like getting lost and trying to figure it out.  Black Island Farms does boast the largest corn maze in Utah, however. 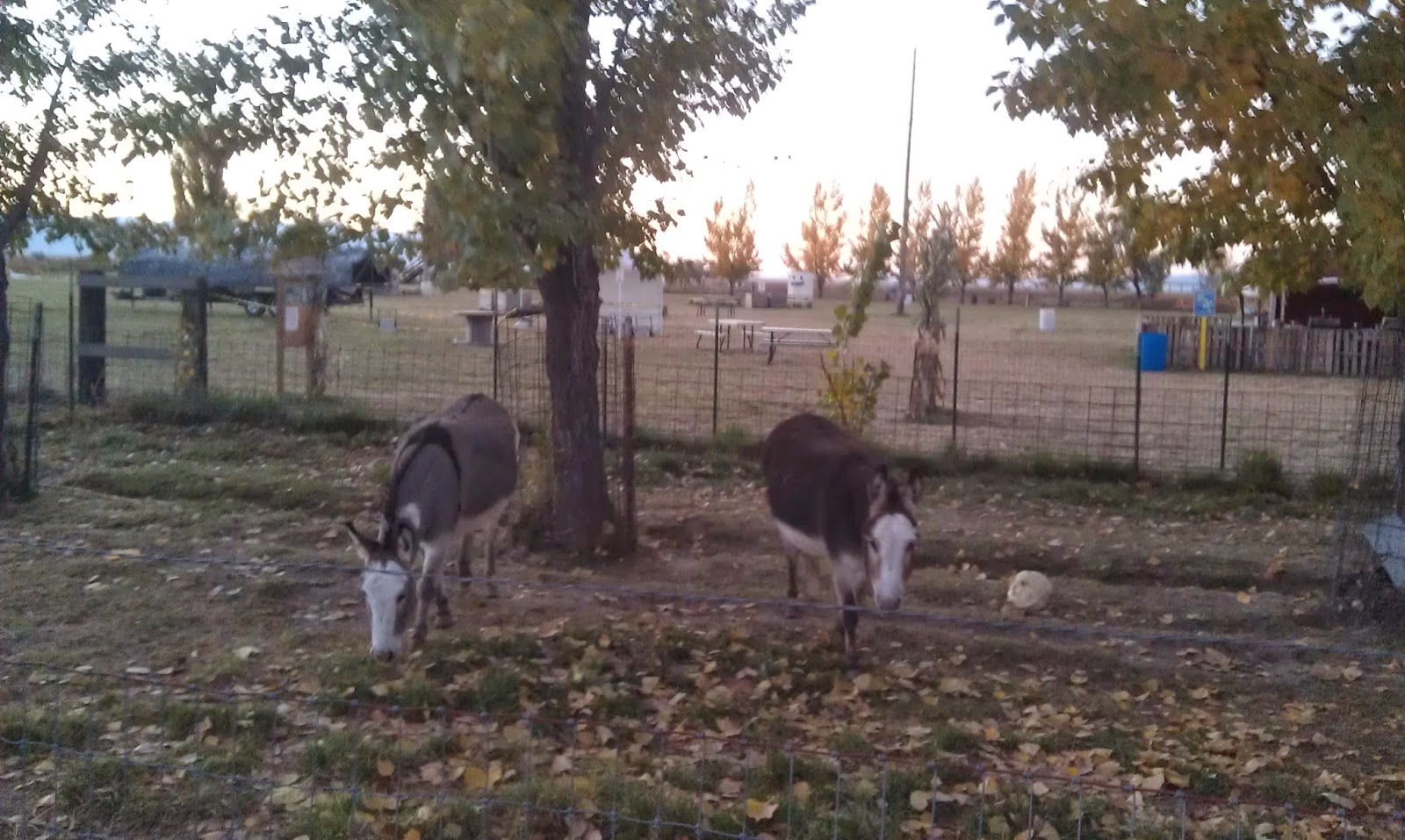 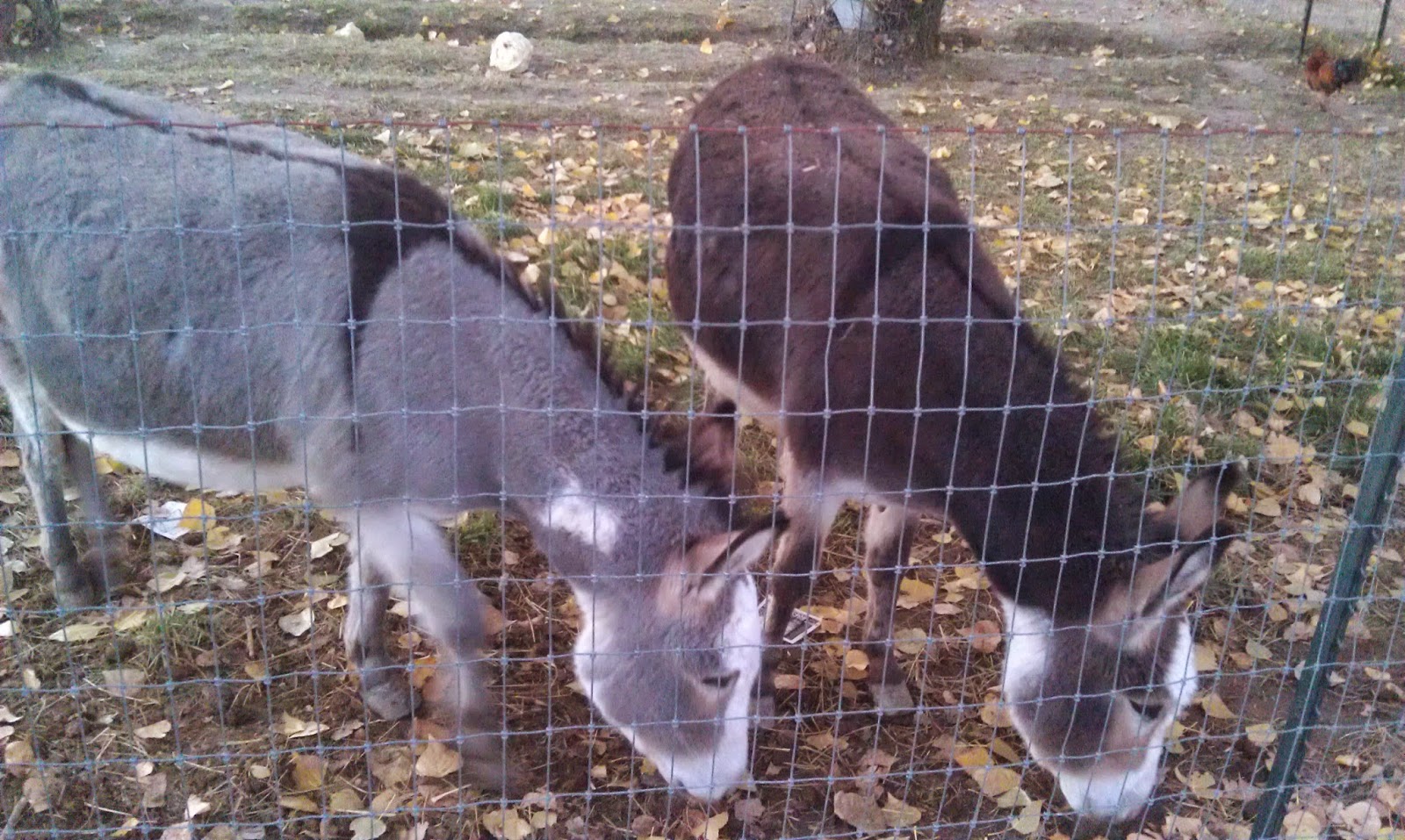 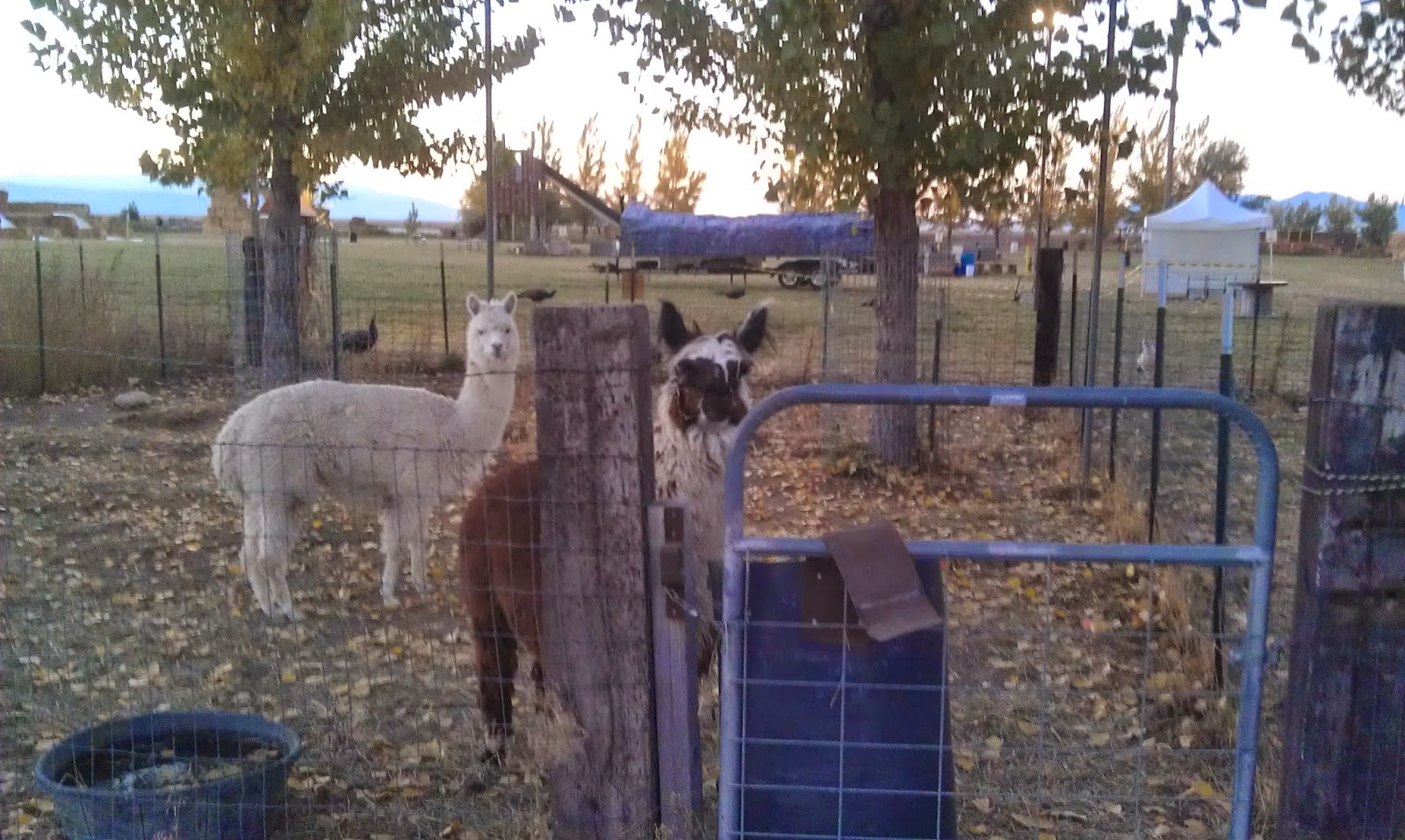 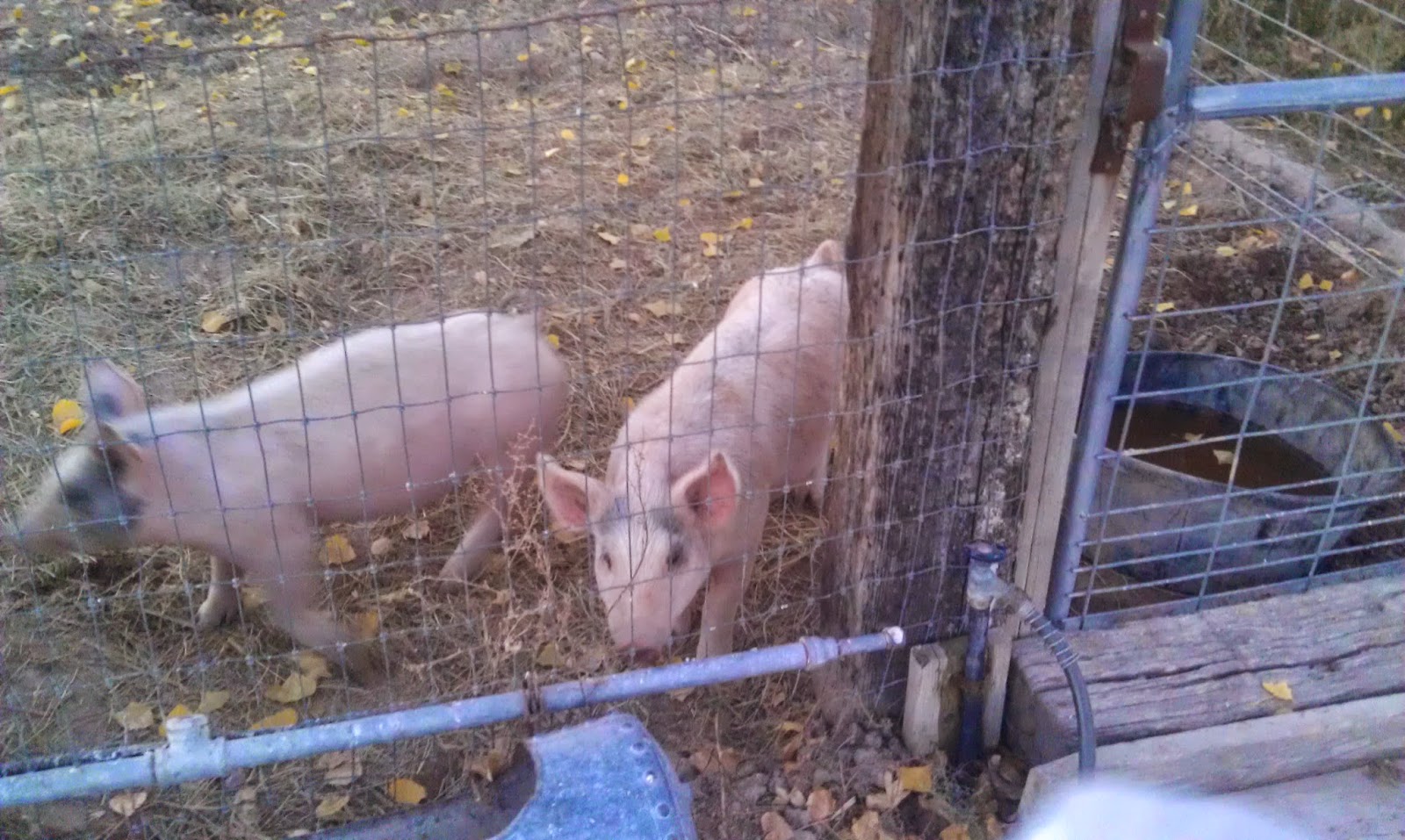 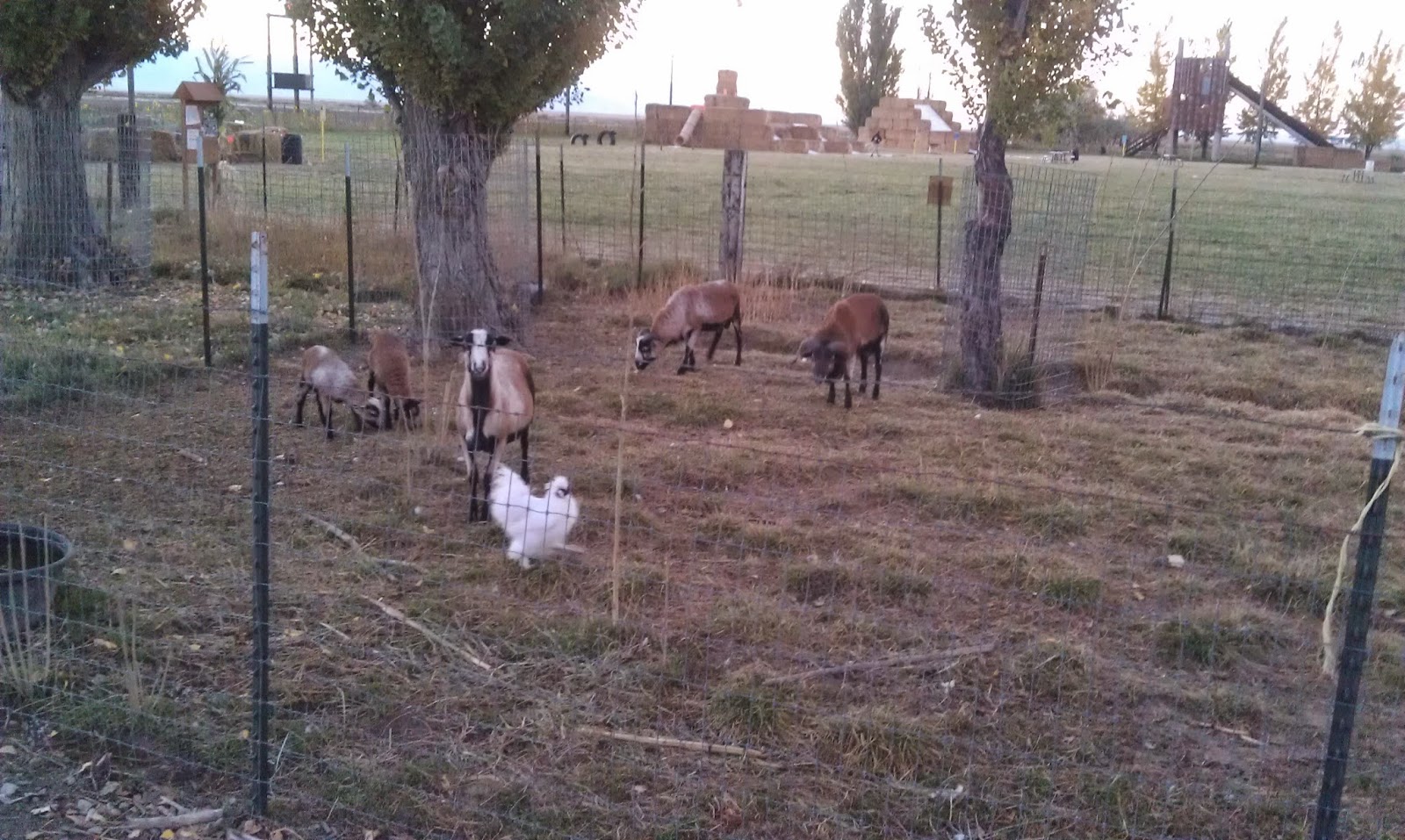 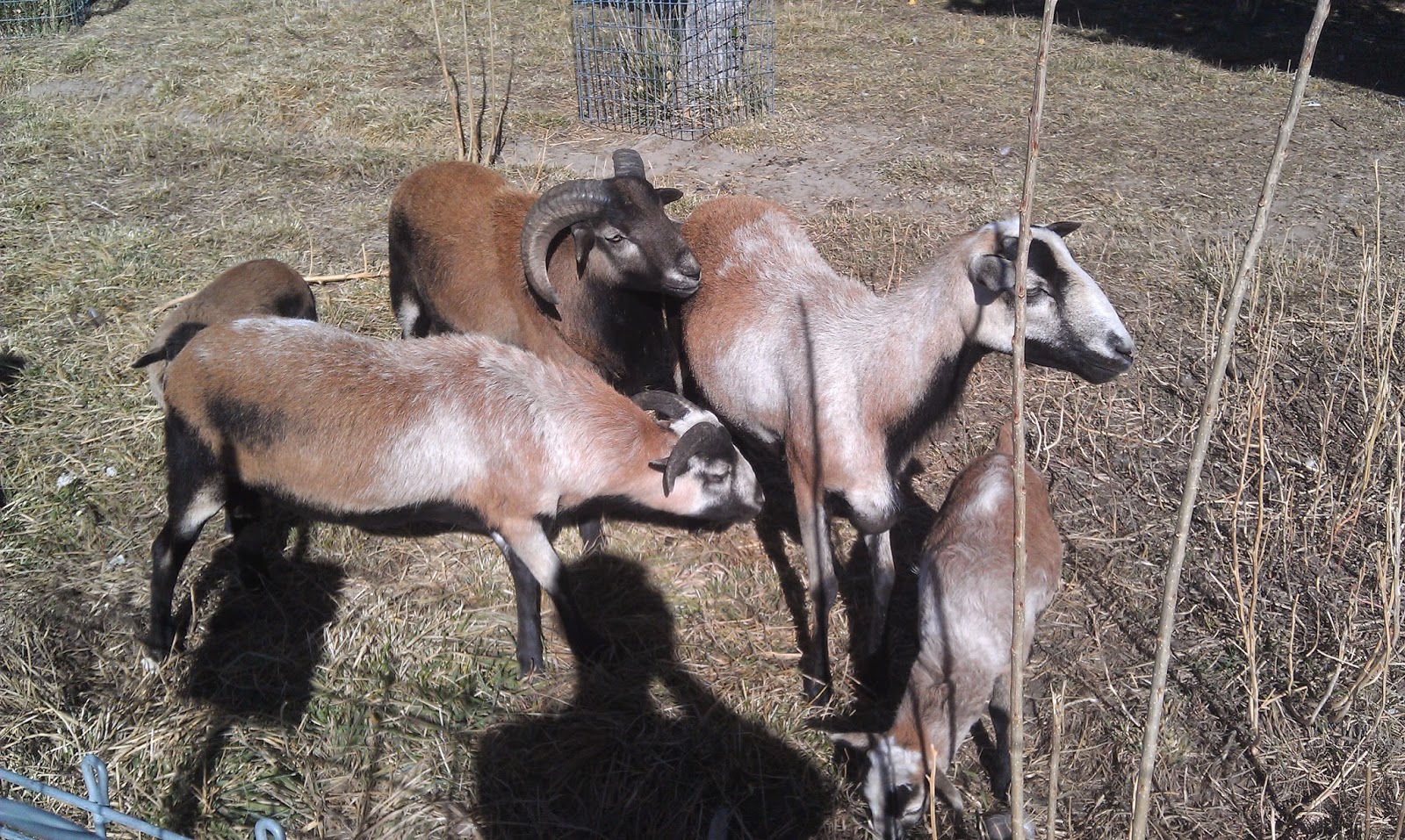 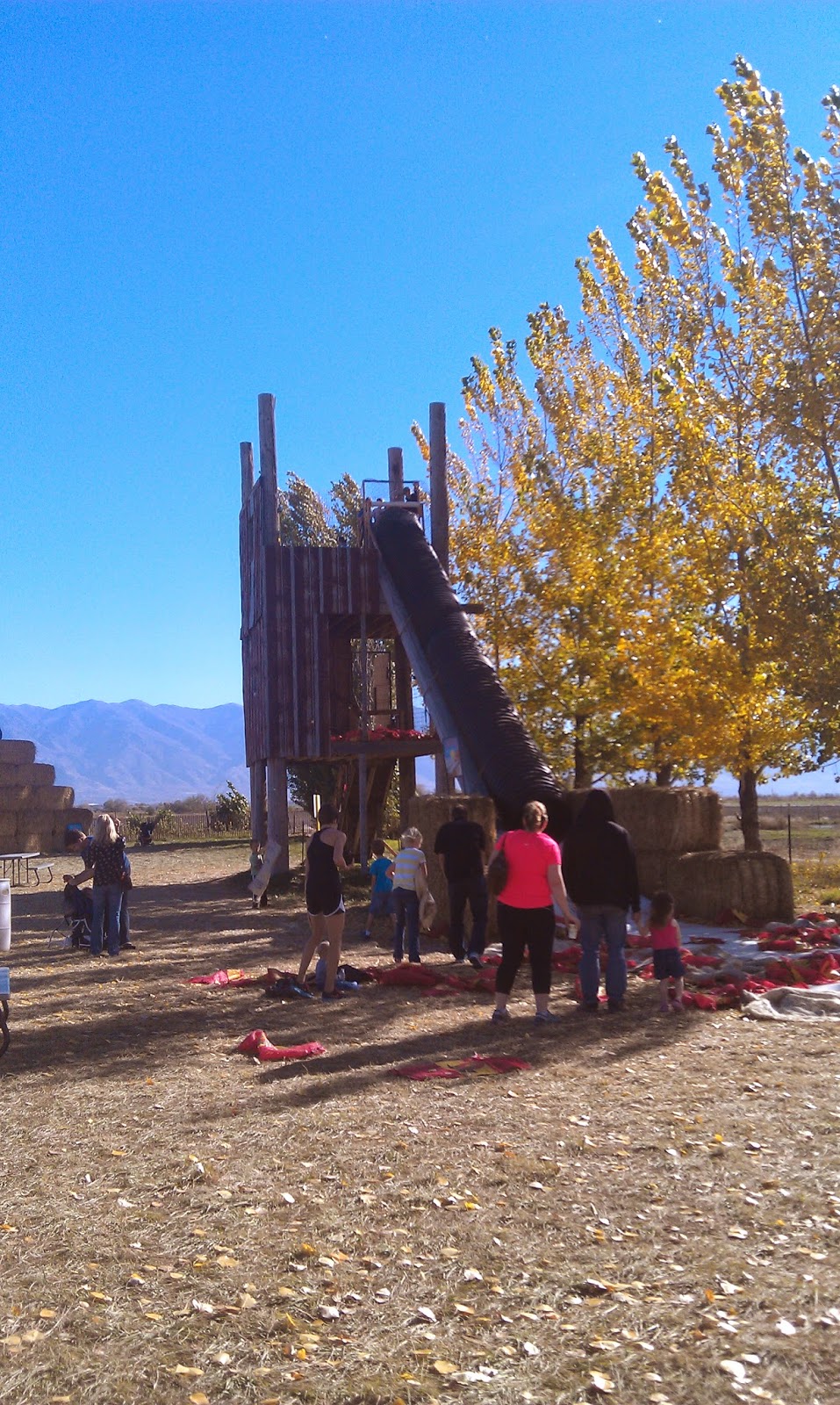 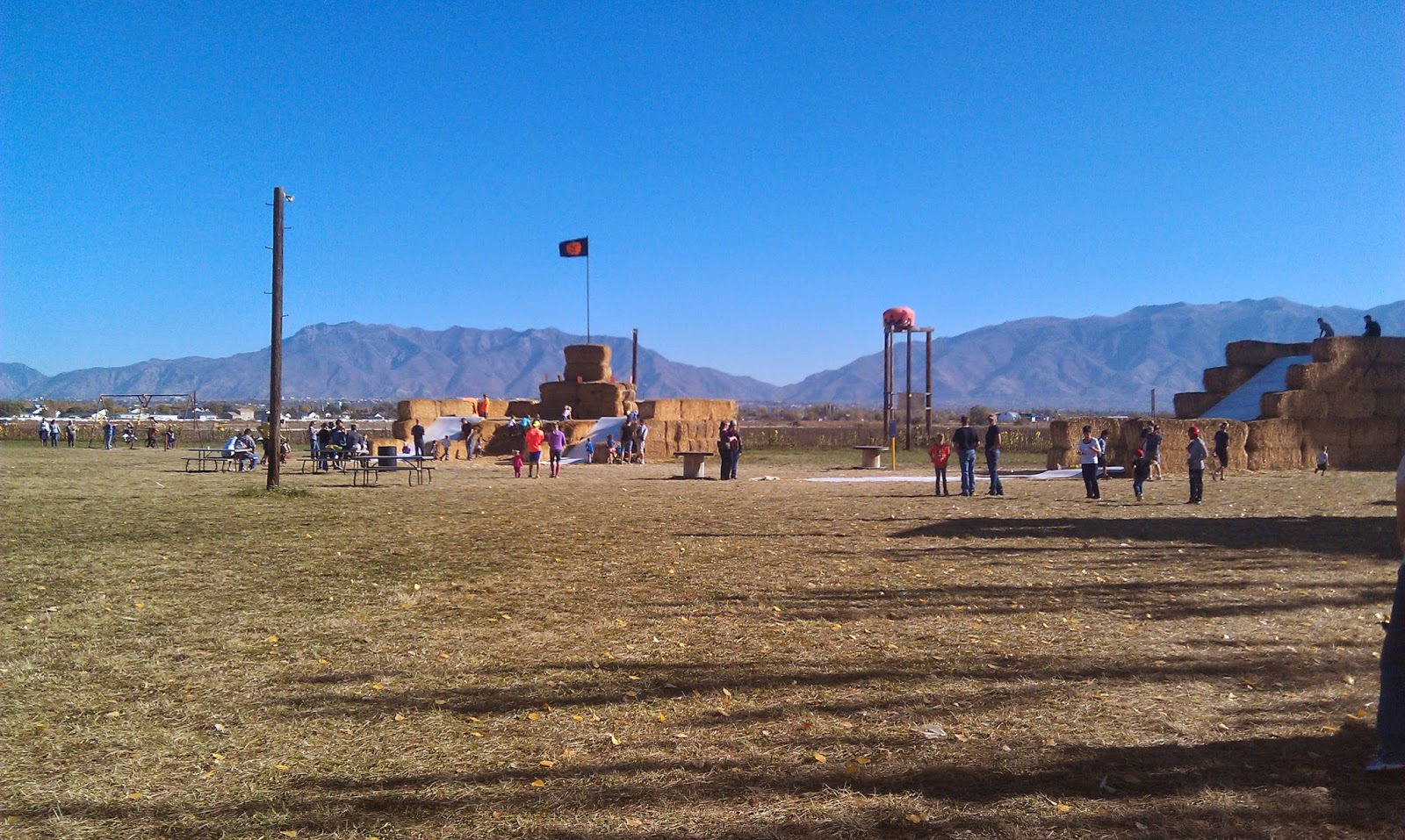 As you can tell from the pictures, it was an absolutely beautiful day at the race and I wound up kicking back and soaked up the rays for about an hour.  I had been given 3 passes to get into the park and since I hadn't used them I wound up giving them to a family of 3 on the way out.  If you have kids, though, this is a great race as the kids will get a free pass and there is so much for them to do.

Anytime I am in Layton, I wind up going to the Golden Corral.  The Layton one is one of the better ones and I wasn't disappointed (I know, I really *need* to stop eating there).

I would do this race again next year.  I know it is a small race, but it would've been nice to have 5-year age group increments.  I am not sure I would've been in the running for that, but it would've given me a bit more motivation to shoot for a better time.  Also, next year, I'll definitely find some kids that want to go and let them enjoy the park.  The wrist bands really make the race worth while and I would've liked to have given them to someone I knew.
Posted by Eddie Gaul at 4:32 PM