You may be thinking, wow Eddie, you are already living in a hotel, why would you want to go to another hotel and stay at another one?

Well the short and sweet answer is that this night in Wendover was free.  I also had a free buffet coupon burning a hole in my pocket, and about $9.00 worth of comps that I wanted to use by the end of the year.  So we figured why not.  Plus, instead of sleeping in a full bed, we had the luxury of sleeping in a king-sized bed.

I had made the reservations on Monday and noticed that snow was in the forecast.  I figured maybe an inch or two, but nothing serious.  However on Thursday it was coming down -- it was the wet stuff too so it made driving tough.  In short, what should've been a 100 minute drive took a little over 2.25 hours.  While the speed limit is 80mph on highway 80, it was 45 mph in spots.  Only once we got within eyesight of Nevada did it get to about 80mph and even then you had to hit the breaks because of some of the drift.

We left at about noon and arrived just after 2:15.  We checked in and we looked at the buffet and they close for an hour at 3pm so we decided just to wait until dinner.  That gave me the opportunity to get in at least a mile run.

For those that have followed this blog, I have done primarily Nevada side runs.  I've done both the north and south side of the western part of town.  I've never gone up Aria Blvd into the Leppy Hills.  I've been itching to do that side for a while and decided I might as well explore that side of town.

They have a thriving little community there.  A tiny movie theater, some apartments, mobile home stuff and some well-to-do houses.  All of them overlook the mountains, Montego Bay, or the salt flats.  Just absolutely stunning views.

The road up there starts off all uphill.  Just a nasty climb.  It was actually fairly warm in Utah and while Salt Lake City had been pounded with snow, Wendover had been spared it seemed.

I was really amazed with the views and did a little bit of exploring.  While that day was my rest day, I didn't really put in major miles, just a mile or two at best before heading back to Montego Bay. 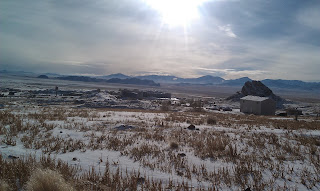 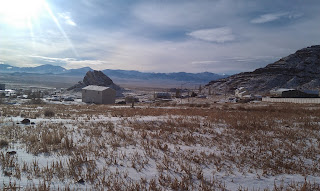 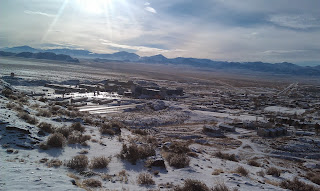 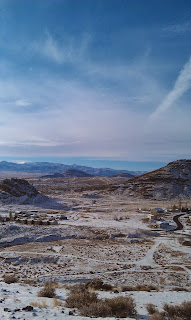 After showering up and changing my clothes, I hit the casino floor.  It wasn't quite 4pm yet and I wasn't terribly hungry yet for my dinner buffet.  We activated our 5x comps and I went over to find my lucky King Leonidas game, only to find it was gone.  We asked some techs who were installing another machine and explained that Interactive Technologies owns the banks and they are constantly rotating machines in and out.  In its place was a few Easy Money machines and a Robin Hood game.

I gave the Robin Hood game a go and wound up winning a few bucks on it.  Nothing major, but enough to keep me coming back.  I also dabbled with the IGT Centipede game.  Sort of an interesting concept in that you play the slot machine and when you go to the bonus round you get to play Centipede for money.  I am not too good at the game, but managed to get some nice bonuses.  Before dinner I was up about $40 or so while Shari lost quite a bit.

I ate dinner and managed to inhale 5 plates worth of food.  I had worked up an appetite with the run and the dangerous drive out there.  I had a free buffet coupon and with our initial gambling and what we had before, Shari and I had a good quality buffet for a total of $1.20.  You can't beat that.

Shari was frustrated with Montego Bay and decided to go to the Rainbow where she has had better luck.  It is just a mile drive down the road so we went there.

My luck turned sour there and I put in about $40 and didn't get very much action at all with it.  Shari didn't have any luck either.

After an hour we went back to Montego Bay and my hot streak continued and by the end of the night (around 11pm) I was maybe down $20 or about even.  Shari didn't play much more as she was down on her luck.

We kept checking our comps and at 5x bonus we were getting a nice bonus.  By the end of the night we were pretty close to having another pair of buffets for the morning.

We called it a night at about 11pm and overall we were pretty happy.  The casino was a ghost town -- I think the weather had scared people away so we practically had the place to ourselves.