Well as most of you know, I am now moving.  After about 18 months in the Pinnacle Highlands Apartments we decided to build a house.  Initially they said the house would be done on December 1, then it was the 15th and now the 20th.  My guess is we won't be moving in until January.

So initially we took the builder's word that they would be done on the 1st and set our exit day for the 8th.  By the time the builder made his correction, our unit had been rented.

So now I am living in a 3-room hotel at just about twice my rent.  Granted I now have Showtime for free and my utilities are paid for and I get a free breakfast, but to put it bluntly... this SUCKS!  I really miss the apartment.

Either way, today was moving today and all throughout the week we've been getting stuff in order.  Granted we never really unpacked when we arrived in Utah, so it was much easier this time.  I spent most of Friday night boxing and tearing apart TVs and futons.

Originally I was going to do the move with just me and Austin (I could've enlisted some friends I suppose).  I am glad we hired Helping Hands Moving Utah.  They sent out 3 guys and a 23 foot long truck at about 8:30 AM.  We had everything moved and in a storage locker by lunch time.  I helped move boxes and light stuff but it was nice to have some muscle with the heavy stuff.  Granted it did set me back about $500 though, but if me and Austin had done it, we'd still be busting our humps as I write this.

The weather wasn't very good for moving -- it was chilly -- in the upper 20's to lower 30's depending upon who you ask.  It was also snowing off and on, so it certainly made the task of emptying the apartment messy and challenging.  Again, most of our stuff was ready to go and I was the 4th man, so it went very fast and the guys I worked with your half my age but knew what they were doing.

So now I am in a hotel a few miles from my old apartment, a few miles from the new house and a hop skip and a jump from work.  Plus I am within shouting distance of Golden Corral.  The internet here is slow (.5Mbps) but it'll suffice.  The hotel is nice though and they were cool about our cat situation.  Plus we are right near a lot of restaurants and shopping. So there's pros and cons... 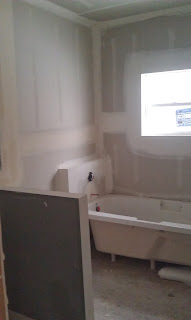 Master bathroom at the house 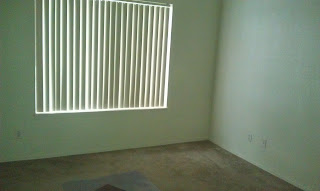