I woke up at 8:30, which is late for me.  I slept pretty well. Instead of the stuffy hotel I've been living at, I had a nice cool room and plenty of room in a bed without being bothered by pets every few hours.

I looked at my phone and the temperature was 16F.  Cool, good enough for a run!

The Awesomest Run Ever

I threw on my tights and a sweatshirt and headed out of the hotel.  I went up Aria Blvd and I wanted to see more of what lay beyond to the east of Wendover.  I had hopes that I would make the world famous Bonneville Salt Flats but sadly it was a LOT further than I thought it was.

None the less, I headed east and followed a service road until it veered off towards a summit (another satellite post) and I took a wide ATV trail into the bowl-shaped valley below.  There was no trace of human activity there... no other footprints, no tire treads, just me and the crunching sound of snow under my feet.  I felt fairly safe and had my cell phone with me, but granted, if I had slipped and cracked my head open there wouldn't be any around to find me for quite some time.

I wound up trailblazing a bit but more or less stuck to the ATV trails, which seemed to go on for miles.  From the best that I can tell, I ran about 9 miles, total, maybe 10.

I was completely comfortable and set my destination for Volcano Peak, one of the largest and most beautiful peaks on the Utah / Nevada border.  I came within a mile of it, and I would've liked to have climbed it, but I had left the hotel too late to reach it.  In addition I wasn't carrying any gels or fluids with me.

Either way, it was just a wonderful run.  The snow was sparkling like diamonds and the views of the salt flats to the south was just stunning.  This was all new territory and it was a total pleasure to be out there.

I didn't see any other signs of human or animal activity except the occasional jack rabbit track.

The terrain was varied and in some areas I had to walk it for fear of slipping on some of the steep slopes but for the most part footing was extremely stable.  I was out there for about 90 minutes.

Wrapping up the Wendover Trip

After cleaning up and loading up the car we hit up the buffet.  It had been a while since I had been to the Friday morning buffet.  I think with the high number of Catholics out there they dole out the fish.  I was pleasantly surprised to find all kinds of muscles, shrimp and even a Diablo seafood type of entree.  They also had jalapeno shrimp and lots of other seafood.  I wound up cleaning up pretty good there.

With our comps we wound up eating for about $5 for the two of us.

So given our room was free and we ate for nearly free, we had a really nice experience and it was good to get away.

I wound up sticking in another $40 into the machines.  The past two trips when I've played my last few bucks I've wound up staying there for several hours because I get on a hot streak.  Sadly, today, that didn't happen.  Once that $40 was done, we took off.

The trip home was easy going.  They still had a little bit more cleanup to do on the freeway but for the most part I could put the car in cruise control and just kick back.

Overall, I had a fantastic trip.  The running totally rejuvenated me and it was nice to see some of the back country.  While lady luck was cruel to us we still had fun and plan on going again at some point in the near future. 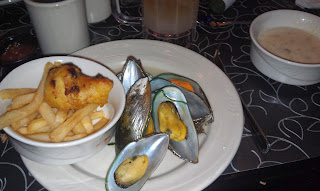