Running and a Close Encounter of the Deer Kind

Today was my final long run in preparation for the Las Vegas Marathon, which incidentally is next week.  While I did do a 5K yesterday I remained true to the Hal Higdon schedule and ran my final "long run" of 8 miles in about 75 minutes.  This might've been too fast, but I kept it easy and just enjoyed one of the last nice fall days.

About a mile into my run though, I came across a deer in the middle of the bike trail.  It looked like it's mate had gotten on the other side of the trail and had jumped over a 6 foot tall barbed wire fence.  This fence is used to keep outsiders from the water treatment plant (must be high-security).

The deer spotted me coming and freaked out.  I waited for him to move on, and he tried twice valiantly to join his woman on the other side of the fence.  He gave up (he literally tried to climb the chain linked fence), and eventually took off to the river but I did manage to get a pair of photos of him.  Hopefully he will get reunited with his friend... 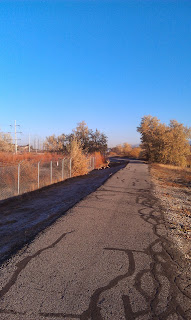 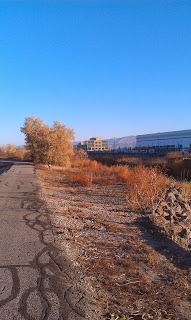 After my run I celebrated at the Midvale Golden Corral to keep my buffet skills up to their highest rankings.