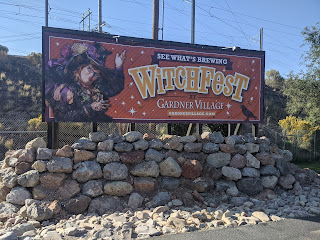 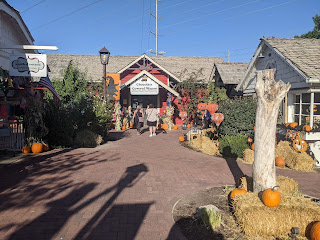 The last weekend of September always sees the arrival of the Witch Run, put on my OnHillEvents.  They've done this race every year since 2018 and being that it is well-attended and started literally 2 miles down the road from me, it is hard to pass up.
The previous 3 editions have simply been a 5K race, held just after sunset.  In years past, I remember running in the darkness with a head lamp.  Last year was supposed to see a 10K and half marathon race, but Covid caused the consolidation of the race.
With the race scene more or less "go!" they again issued the additional races and I wound up signing up for the 10K. 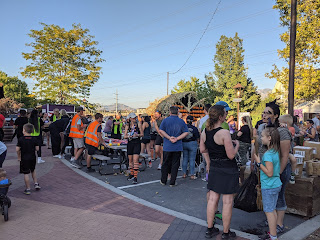 I wound up picking up my bib the day before on a run.  With the race headquarters 2 miles away, it was easy to jump on the trail get my bib and head on back.  So the trials and tribulations of getting my shirt and bib, stashing the shirt in the car and all that wasn't a thought.  It also enabled me to roll into the race site a little later than usual.
Running a 10K is hard, but running one at 5 PM and an 85 degree starting temperature -- it makes it harder.  To compound matters, my 1 PM lunch was still sitting in my gut like a rock.
This race is a bit of a fun run. Yes there are overall and age group awards, but for the most part it is a social event.  The 10K -- a little less so.  There were only a few half marathon runners who had left at 4 PM.  I surveyed my competition -- about a 100 runners.
The race started at 5 PM and we were off.  The race starts at the Gardner Village shopping center -- kind of an arts and crafts / eclectic collection of boutique shops.  After a few hundred yards you are dumped on the Jordan River Bike Trail and begin making your way south. 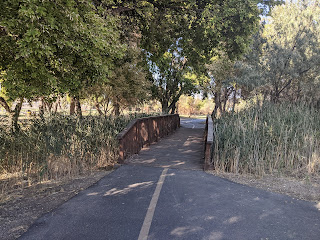 I hadn't done much of a warm-up.  It was hot and I sort of lost track of time. Also my legs weren't feeling terribly fresh.  But once I started running it felt like I had sent my heart into overdrive. I was sucking wind.
I told myself to take it easy and just worked myself into a low intensity pace.  The guys I would never catch took off and I just worked on maintaining a pace that I felt I could hold.
I figured I was in 4th place and by mile 1 another person had passed me.  For some reason I felt like the guy in front of me though represented 3rd place.  The top 3 finishers would get plaques.
My goal was to hang on as long as I could with the guy, hit low 8 minute miles for the first 5K and then pour it on, on the way back. 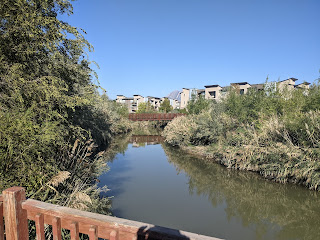 The first 3 miles largely went to plan.  It was warm though and by the time I hit the turn around I knew the death march going back would begin.  I had passed the 4th place guy and now I had the job of catching the 3rd place guy -- who was a solid quarter mile ahead of me.
Occasionally, I'd look behind me to see if the guy I had passed was making ground on me.  I'd spot in the background but I think he was just as gassed as I was.
I had a glimmer of hope that I was going to catch the 3rd place guy when I saw him walking.  I was still running but my low 8 minute mile had turned into a half marathon 8:44 pace. At times I felt like I was gaining on the 3rd place guy but every time I gained some ground, he picked up his pace too.
It was nice having an out and back course.  I could gauge how close I was to the other runners as well as get words of encouragement from those behind me.  I was digging deep, but despite my best efforts, I was gaining anywhere.   My legs were just baked and I was feeling the heat. 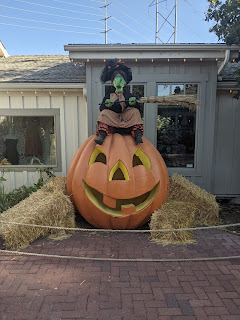 There had been 2 water stops (at about 1.25 miles out) and I had carried a small flask of water with me  and I had wound up going through all of that before the end of the race.
I knew around mile 6 that I wasn't going to be in contention for a plaque.  I couldn't get anything going and my pace had drifted to an 8:55.  I kept looking behind me and there was no one threatening my position, so I was pretty content just to maintain this and get it done. 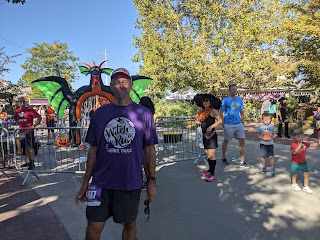 During the last .25 mile I slowed down.  I was gathering some strength to make the final push into the finish line.  My legs felt like rubber and I was sweating profusely.  I just wanted to be done.
I rounded the final corner of the bike trail and returned to the Gardner Village parking lot and made a speedy finish, with a time of 51:38. 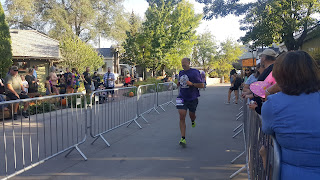 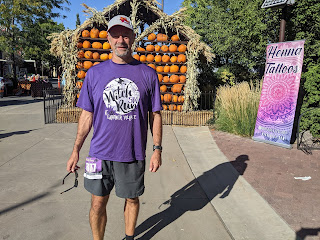 I do believe I came close.  Certainly I ran more than 6.04.  It should be noted that there are a lot of power lines from about mile 1 until 2.5 -- including a heavy duty set of transformers.  In the past I've had lost connection problems there.  It is one of the reasons why I don't normally run south on the Jordan River Trail -- loss of reception.
So I am going to count this as a pretty legit 10K, which means I ran okay, but not great. 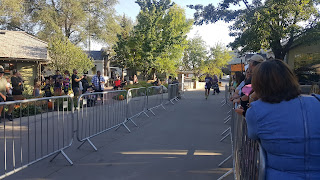 The race had about 500 participants, mostly for the 5K.  It was crazy busy at the finish line.  Fortunately, one could grab their award and hit the road. In the past, exiting the shopping area has been a major pain, so I was happy to get out when I could.
Post race refreshments were sports drink, candy and of course Fat Boy Ice Cream Sandwiches.  I had stashed a cold Gatorade near the finish line and I gulped that down greedily.  I was very dehydrated when I finished and kind of wonky feeling. 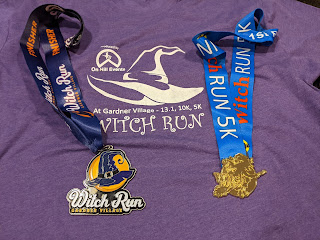 I also received a finisher's medal and an age group award.  The t-shirt was a polyester / cotton mix.  I like the original 2018 shirt -- I still wear it a lot.  This one, will probably be relegated to an easy run shirt.
I paid about $35 for the race 3 weeks before the race start.  So the race was affordable and within reason.  It was just convenient to run a race so close to home.  It was, however, a challenging time of day.  It sort of killed off my Saturday on account I didn't want to do anything too strenuous prior to the race.
Overall, it was a great social event and I'll likely be back next year.
Posted by Eddie Gaul at 3:06 PM