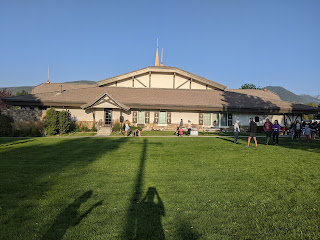 Every September, on Labor Day weekend, I like to participate in the Swiss Days 10K race out in Midway. The Swiss Days festival is a big deal for this bucolic farm town on the other side of the Wasatch Mountains (from Salt Lake City).   The festival is a town celebration with cultural music (Swiss) and local talent.  Also they serve food, typical fairgrounds snacks, and an assortment of vendors selling arts and crafts.  The turn out on this festival is absolute huge and it is a big deal for the area.
It is growing up fast, but there is still a lot of charm left.  Lots of big lots, expensive houses and just incredible views.  It is one of the reasons why I keep coming back to this race. It is probably my favorite 10K race course.  It doesn't mean it is an easy one, but it certainly is scenic. The race is an early starter - at 7 AM.  It is still chilly by the time you roll in for the start.  I am glad I brought a jacket.  I was one of the first to arrive so I got a really nice parking spot close to the race headquarters -- at the LDS church.  Packet pickup was a snap and I was ready to race in short order.
I wound up doing some drills, some strides and a fairly easy running to warm-up.  My hands were cold and I was sort of wishing I had some thin gloves to wear.  But I knew once the race started, I'd be fine.  Most people felt the same -- and I went with shorts and a dry-fit t-shirt.
The race started promptly at 7 AM and we were off running down Center street towards the fairgrounds.
The race isn't chipped time, so I had assembled up near the front with the rest of the runners -- which seemed to be primarily high school aged runners.  Due to Covid-19 though, I suspect this year's attendance was a little less.  I haven't looked at the official numbers compared to previous years, but it seemed there were less runners.
The race is run entirely on village paved roads.  There isn't a lot of traffic and the few spots that you do have to contend with traffic was marshalled.  Also it should be mentioned that Midway sits at over 5600 feet, so elevation is something to consider.  This course also could be described as hilly -- but what you climb, you get to come down on.
The first 2.5 miles or so are pretty much uphill.  The first mile is a bit of a grind.  There are some hills here but none of them are back breakers.  You have some folks cheering for you at this point too, since we are still in town.  But it is mostly quiet running along the sleepy roads.
I was trying to gauge who I was running against -- the awards for this race are generous -- at 5 deep for 5 year age increments (turns out it was 3 deep this year).  In years past I've gotten something in my age group and other times I've just missed out.  Instead of medals for awards they give out glass steins emblazoned with a Swiss Days sticker.  I've gotten a few of them over the years and I treasure each one.
I was a little humbled to see an 8:23 on my Garmin for the first mile.  I felt that I was running slightly faster than that but I told myself to be patient.  I know the great miles were ahead.  I just needed to get through the hilly section.
Mile 2 was even more humbling.  This is the hilliest stretch and it is a grind.  Again, I felt like I was running faster than my Garmin reported (8:55).  However, at this point the course gets even sexier.  You have left town and are approaching the Wasatch State Park area.  The views of the towering Wasatch mountains in the early morning are stunning.  However, it was hard to appreciate them given how hard I was running.
Mile 3 is where the fun starts.  Yes, the first half is uphill and the course takes you on a climb up a short and steep hill. Then at the top, you run beyond it a ways and round a traffic cone before coming flying down the hill.  Why can't they adjust the course to not do this?
I knew I was running pretty well after seeing a bunch of speedy high school kids coming in the other direction.  I was eyeballing the competition and felt like there were a few guys that could've been in my age group.  I was working off of one guy and every time I got a little ahead of him, he'd catch up and run with me.  However, once I rounded the turn around cone I threw it into another gear and kept on going.
Mile 3 saw an 8:21 come up.  I know I had been aided and hindered by the turn around hill.  And I remember from previous years just coming to a screeching halt in this area -- having been worn out by the hill.  But my legs were still ticking over and I knew the next 2 miles were down hill.  Could I make up some of the time that the hills had cost me? 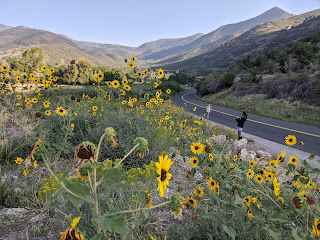 The race had thinned out at this point but I was still working off a variety of people. From a mother encouraging her speedy junior high runner along, to high school kids.  Once I hit the downhill, I really hit it home.  Again, I was feeling very strong and was aggressively going for whatever I had.
I was actually stunned to see a 7:39 come up.  Wow! A 5K mile pace at mile 4?!?!  Granted, I was flying down a hill, but in years past I had hit the low 8's on this mile.  And I still felt like I had gas in the tank. 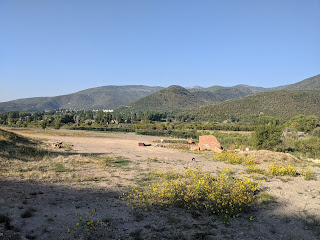 Mile 5 gets you back towards town and the route is now fairly flat.  Again, this is another part where I start hurting and I've got absolutely nothing left.  Also there is a small stretch where you are running up a long but not so tall hill.  It isn't in a very exciting part of the course either and at this point you are hurting and are so close to the finish line.  I had a few people behind me and those that were ahead were several hundred yards in front.
I kept imaging the people behind me as in my age group.  I didn't want to verify that they were, but it made me push a lot harder.  My leg turnover wasn't great, but cardiovascularly I felt awesome.
Occasionally I glanced at my watch and saw that my pace was around 8:30, but I felt like I was running faster.  "Lies!" I thought.  I inched up the pace as I could see the final finish line banner ahead. 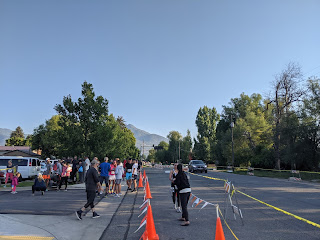 A pair of runners flew by me and I was crestfallen because one of them looked to be my age.  There was no way I could outsprint him.  The other one was clearly not in my age group -- probably half my age.  But I lost two positions in the last 5 seconds of the race.
I hit the final mile at 8:09 -- a fantastic time for me and finished in 49:55.  Definitely breaking my personal best on this course by over 2 minutes. 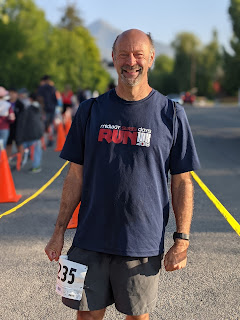 So no finishers medals on this one.  But I did wind up winning my age group.  So I got to collect the 2021 glass stein to add to my collection.  I was so relieved to have placed actually.  I had worked hard for every second and I was really worried that I wasn't going to place.  I would've lived had I not, but it is rewarding to win something. 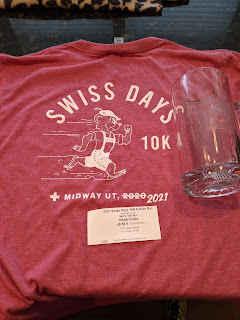 One thing I really like about this race is that they have epic post race donuts.  I think they are made by a local vendor and they are definitely an upgrade from your typical donut experience.  I could've made a meal out of them and celebrated my victory by grabbing 2 of them.  They also had fruit, sports drink and water.  Also, to wash down the donuts, they had chocolate and plain milk.  This is one of the best post race spreads. 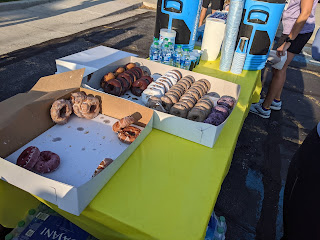 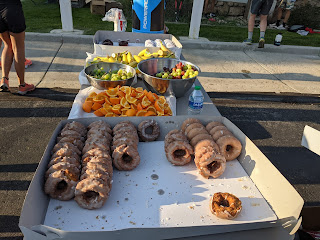 The shirt I got, unfortunately, was a cotton one -- and also it was an extra large youth size.  I tried it on and it felt like it was squeezing my innards. It'll get donated.  I definitely miss the tech shirts they used to give out.
Performance-wise I did great.  Yes, this isn't a PR setting 10K for me.  The course is hilly and I am at higher elevation.  That being said though, I did break 50 minutes on this course and my best time was about 3 to 4 years ago with an upper 51 minute race.  Again more improvement from me.
I simply love this race. There is a good crowd and I love seeing all the high school kids participating.  I knew a few people there and this race is probably one of the prettiest 10K courses out there.  I am already looking forward to next year.