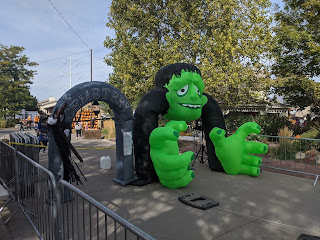 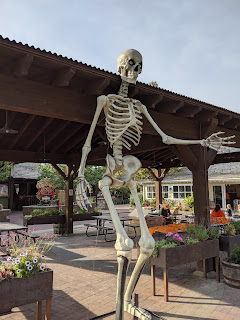 Each year around late September, I do the Witch Run, held at an eclectic shopping area called Gardner Village in West Jordan UT.  It is a super convenient race being that it is a mere 3 miles from my house.
What makes this race fun, however, is that it is held at night and the temperatures wind up being significantly cooler.  I don't necessarily run well at night, but it makes for a change of pace and after the race there is a festive atmosphere.  This race is usually well attended too by the casual runner.
However, with Covid rearing it's ugly head, this race -- which was going to introduce a half marathon and 10K (and an earlier start time) it was reduced to a 5K -- with the earlier start time.  I had originally signed up for the 10K (way back in 2019) but was okay with the distance change. 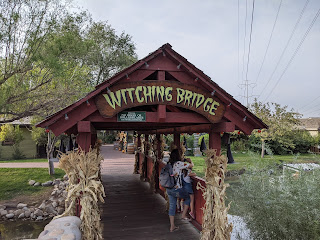 I arrived at the race well before my 5 PM start.  I had picked up my bib the day before so it gave me ample time to find a good parking spot, get a few additional photos of the starting area and time to warm up. 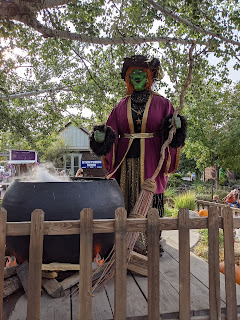 It was warm and I had done a pretty aggressive hike the day before, so I was feeling sore in a lot of different areas.  My warm-up went well but it was absolutely minimal.  I honestly expected this race to be a lackluster performance.  I just wasn't feeling speedy at all.
The race got off to a slightly later start (approximately 5:05).  Before the race we had estimated our finish times and so we roughly lined up (6 feet apart) in that order.  There was about 15 seconds of intervals between each runner, so at least we started off at relatively the same pace.
The first mile involves a lot of turns and going under a street via a rickety part of the bike trail.  The Jordan River Trail people have installed some bouncy plywood that makes it a little awkward to run over.  Fortunately, it is pretty short lived but the first quarter of a mile is always tough.  You want to get going but you are changing directions quite a bit.  I also had caught the guy who started before me (and I suspected he might be in my age group too).
Once I got into the groove, I felt like I was holding a decent pace.  As I was running, however, I was trying to figure out which way the wind was blowing.  I thought it was coming from the west, which would mean virtually no impact on the run (since it was primarily a north / south race).
It was great running weather and I felt in control during the first mile as I zipped along the bike trail.  I was passed by 2 people, but whom I would trail for most of the race.
I was so busy running I really didn't pay too much attention to my first mile split but I knew I was running pretty quickly and the soreness from yesterday's hike: it was gone.  But could I hold this pace?  I really wasn't sure. 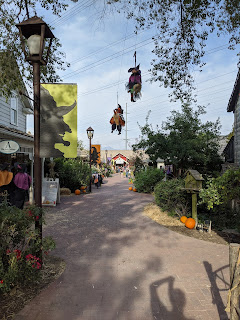 The course is an out-and-back along a standard issue paved bike trail, which I have run many times for this course's 5K (it was one of my first 5Ks when I moved here in 2012) so I had a great deal of confidence in how far I had to run and exactly where the turn around was.
Sure enough, around the corner I hit the turn around, still feeling pretty good (the trail actually dead ends here).  I circled the cone feeling like I am going to have a really great race, only to get hit by the wind.  Every runner's nightmare....   I figured the wind would be short lived on account that I was running slightly west -- but no, it was more or less in my face for the rest of the race.
I tried tucking in behind the second place girl but to no avail.  I'd get close and she'd pull ahead.  Obviously, she was out to beat me. 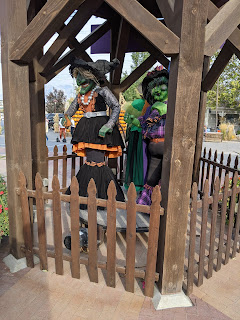 It was great getting shouts of encouragement.  Over a 150 runners and walkers of all abilities were working the same bike trail I was.  My name was called out a few times and I waved or gasped a cheer to others I knew.  While probably not terribly Covid safe, it was nice to see everyone.
The final mile is usually where I fail.  Again, I totally missed the Garmin alert for mile 2 but I glanced at my watch shortly afterwards and realized I was running pretty close to 8 min / mile. 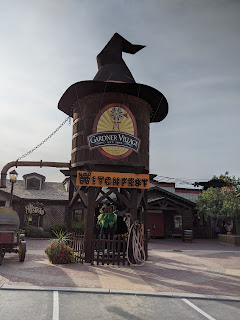 I dug deep and I knew my form was sloppy.  I was hurting but I was on target for a decent race after all.  And I knew this was a legit 5K -- it definitely is not a short course.
I wound up catching another runner who might've been in my age group about 15 seconds before the end of the race (I suspect he may have beat me though with the delayed time).
I wound up crossing under the Halloween themed arch in a hair over 25 minutes for a 3.15 mile course. 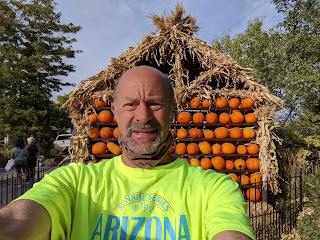 After crossing the finish line I looked at my watch.  I was disappointed to see a 25 minutes on the screen.  But the overall distance was 3.15 miles, translating to a "true" 3.10 mile race, it winds up being about a 24:43.
The last few years I've been hitting well over 25:30, so this was a breakthrough -- mostly because I am about 15 pounds lighter than last year. 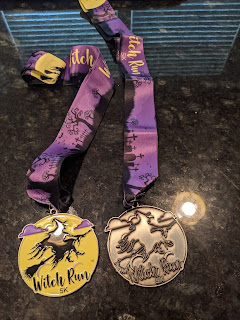 I was handed my medal and some treats in a bag and a bottle of water.  I waited about 5 minutes before seeing if I had placed.  I wound up taking second place in my age group, which sort of shocked me.  While I had seen some runners who looked like they were in my age group I didn't see any of them ahead of me in the race.  I suppose that's the drawback of a staggered start.
I paid $25 for the race during a Thanksgiving / Christmas special.  I was happy with the amount paid and had a good time at the race.  Given the festive nature of the race, I really had a good time and it is quickly becoming one of my favorite annual races. 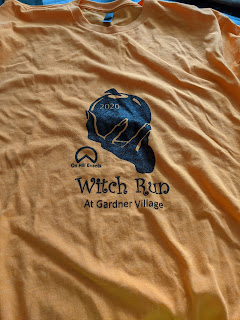