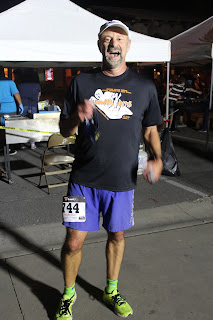 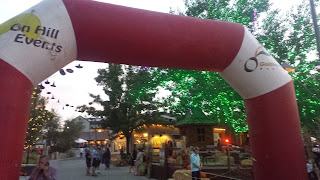 
I am not sure what possessed me to run 2 5K races in one day, but I guess since it has been a while since I had raced, I figured I might as well go for two races in one day.

The previous post explained that I had run the Jordan River 5K race in the morning and it wasn't a terribly great experience performance-wise for me.  So it was with a little bit of fear that I rolled into the race location at Gardner Village on Saturday night. 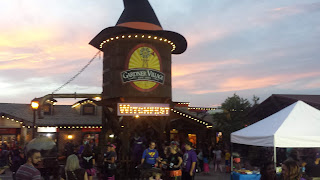 I've run this route many times before.  Gardner Village is only a few miles from my house and is the site to many races.  It is held on the south end of the Jordan River Bike Trail.  It is a multi-use trail that serves cyclists and runners alike.  It isn't near any houses or such and it can be dark for running.  But it is flat and the paved trail is in good shape.

This race was a Halloween-Themed race.  I am not big into themed races but I figured why not.  Most of the runners were fairly casual.  There were a few speedy, serious runners, but for the most part, most of the folks were in costume and there were a lot of kids and families.

I was really worried because the Jordan River bike trail is not a huge bike trail.  And with the crowd there, it was definitely a big race, as far as 5Ks go (they estimated close to 400 runners).  I had fears of being crammed / hemmed in by walkers and while I figured this wouldn't be an "A" race, I definitely wanted to redeem myself from the morning's less than glorious finish. 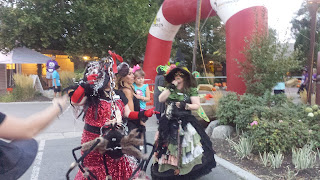 The race started at 8 PM and it these days it gets dark by 7:30.  I brought a headlamp with me, mostly for others to see me running.  The course was an out and back and with the majority of folks appearing to be slower runners, I figured it was best to let people know I was coming on the way back.

The shopping center was decked out with Halloween lights and atmosphere.  Aside from the runners, there were also a ton of shoppers and people just soaking in the Halloween atmosphere. 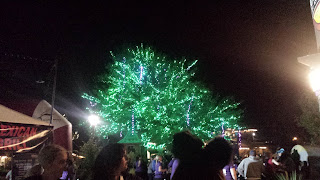 The race started on time and fortunately the race director had everyone lined up according to pace.  There were only a handful of folks in the front that shouldn't been there, but I was within 15 feet of the start and when I took off I wasn't hindered at all.

I really didn't know what I had in me but I felt pretty good.  My goal was to go out cautiously for the first mile and then if I felt good push it to the finish.

The first mile went according to plan.  I was running with the 2nd place woman and another guy, who I soon dropped.  The girl and I wound up working off one another until the turn around point, when she turned on the jets. 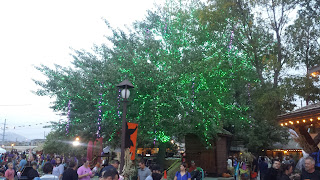 I used my headlamp, which I carried sporadically but a few of the other runners had theirs on so I didn't need to use it.  However, once I got to the turn around the front runners had either pulled well ahead of me or were far behind me.  It was as if I was running solo.

This course is spot on 5K -- it might be a little long, but I was happy to see the turn around properly placed (it is at a dead end so it can't really be misplaced).

Up until this point I had been running a bit into the wind and I was hoping I'd feel a little bit of a push from it as I returned.  But alas, I just didn't seem to get any benefit.  The second place woman was well ahead of me and after hitting the 2 mile marker I looked behind me and there was no one behind me. 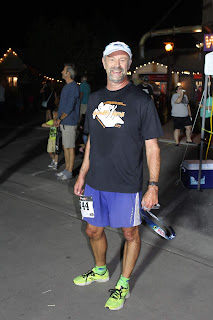 The crowd heading out were generally polite and I had very few problems not having a lane to run in.  I think if I had been in a group of runners, there might've been issues.  However, most people stayed to the right and it wasn't even a concern for me.

I was breathing hard at this point and while I felt my pace was decent, I sort of felt like I was losing it a little.  I don't fiddle with my Garmin in night races but my splits, for a change, were fairly even.

The shopping village finally came into view and I couldn't have been happier. There are a few turns and small hills on the way back, including running under a bridge.  Sort of treacherous footing in places and the turns tend to be fairly sharp.  So I probably lost a little time there.

I crushed it to the finish with the help of some of the volunteers who encouraged me to cruise in. 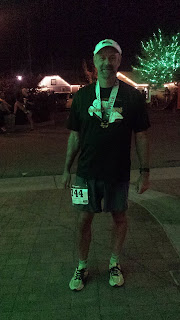 My time was fairly average, but for the second race of the day, I felt like I had run a lot better than my first race. Also night races are a bit harder to run due to the lighting.  You always hold something back. 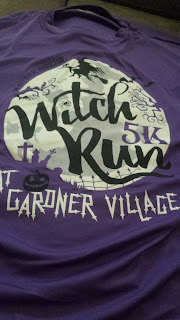 I felt pretty good after the race.  I had stashed some Powerade in a bush before the race and it was still there.  I nursed that and watched people come in for a while before going back to my car for a jacket and my phone.

Awards took a bit but I am glad I stuck around.  I wound up winning an entry to next year's race.  I never win anything at race drawings and a race this large, I was surprised I came up in the drawing.  Score for me! 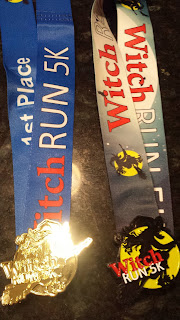 I knew I had finished in the top 10 and was glad to see I had won my age group.  There were a few other older guys in front and I wondered what age they might be.  Glad they weren't in mine.

Once again, I was happy with my run.  I had low hopes on my performance and I figured the race was going to be a fiasco with first-time runners.  But all my fears turned out to be unfounded.  In fact, I had a great time.  I was smiling ear-to-ear and it was so much fun to see a bunch of people I haven't seen since I left for Arizona.

The price of the race was a little steep.  I think I paid nearly $40 for it including service fees.  Granted, I did register the week of the event.  I love the shirt design and once again, I had a great experience.  I look forward to running this one next year.
Posted by Eddie Gaul at 6:07 PM