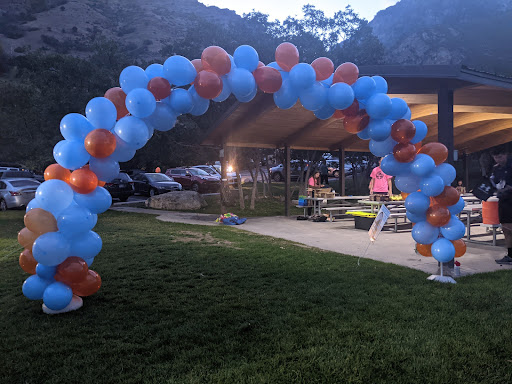 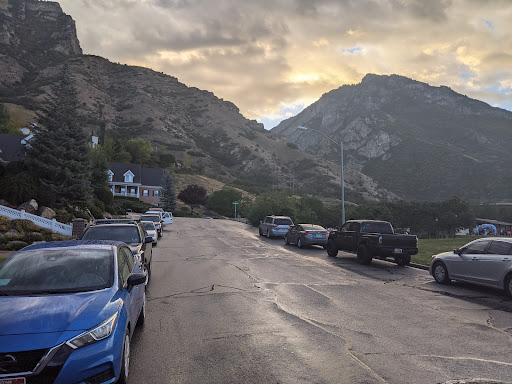 At some point this past spring I got an offer email to come re-run the Rock the Canyon 10K Race.  I have the done race twice before and with a price that was definitely a steal (I wanna say under $20), I decided to sign up.  If something else came up, I certainly could change my mind and not be too sad.

The race is a challenging course set on the benches along eastern Provo.  It is a beautiful -- but hilly run.  Every year I've done the race, I've been humbled -- my 10K time is normally in the low 50's.  But this race is so hilly and relentless that my time is usually quite a bit higher -- in this year's case, it was over 6 minutes higher.
But I keep coming back to this race. Primarily on the price point and it is just a fun race in a beautiful setting. 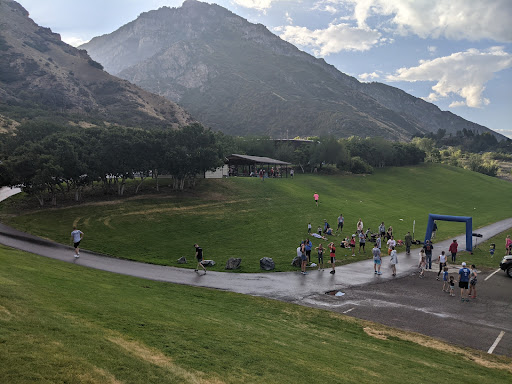 The race started at 7:30 in the morning and I got to the race site at about 6:45.  It was dark and I was one of the first to arrive. Occasionally a few rain drops splattered on my windshield but it seemed like a really ideal day to race.
I picked up my bib and shirt in a matter of seconds at the park's bowery.  Just as I returned to my car it started to rain -- heavily.  It was close to 7 AM and the last thing I wanted to do was run a 10K in a torrential downpour.
Fortunately, like most storms in Utah, it was short lived.  Within 5 minutes it was simply raining and then finally just drizzling and finally it stopped.
I did a very brief warm up and used a body stick to work out some kinks in my calves.  I had a bit of shin splint that I was hoping wouldn't act up.
The race started promptly at 7:30 and we were off -- just as it started to rain again.  Great! Just a t-shirt / shorts for me and I was getting chilly. 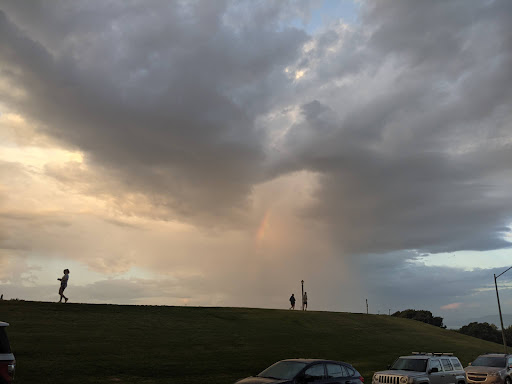 I told myself to be patient.  This year's course was different from the previous but it was also kind of the same.  In fact, about 85% of it was.  And the first .75 of a mile of the course is uphill.
So I was already breathing hard before I had even exited the parking lot and I was swallowed up into a single line to do switchbacks up a dirt trail.  I am not sure I could've run much faster but I was hemmed in and blocked from time to time.  I even had to walk periodically.  I knew this wasn't a PR attempt but I definitely was gunning to beat last year's time. 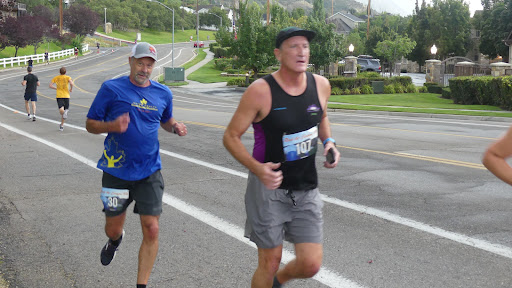 Finally we got to a wider section of the trail and the weather conditions went up a notch.  Wind howled through the canyon and my hands were getting cold.  After exiting the canyon though, the rain and wind stopped and it seemed like I was going to catch a break.
Near the start of mile 2 you get a really nice downhill section.  My shin wasn't happy with the massive descent and I was terrified of slipping and falling on the wet asphalt.  Fortunately, slipping didn't occur, but part of me held back.  It wasn't unexpected to see a 10 minute mile come up on my watch.
At this point the course has gone from trail to road racing -- hilly road racing.  Either I was climbing a hill that most race directors avoid for their courses or grinding my way up a small incline.  I was hurting but I actually felt like I was running well.  I was furious though to see a 10 minute mile come up for mile 2.

At this point I was getting discouraged.  With all the gains I've made in the past year, why I wasn't I running faster?  To make matters worse, walking up the hills almost resulted in the same pace had I just shuffled up them.
Mile 3 finally got into the flatter section. There was a good mile stretch of just a slight incline. I wanted to make up some time, but I was simply tired.  I kept counting on the fact that the return trip would primarily be downhill. 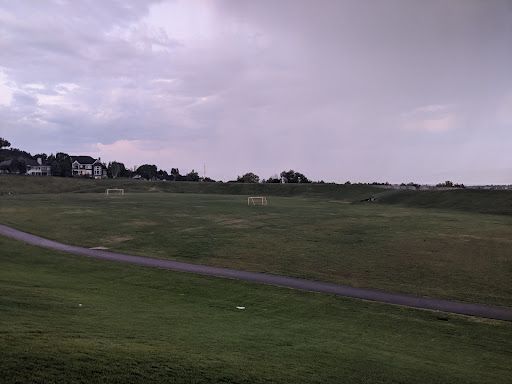 Mile 4 got me to the turn around point.  It had been some slight inclines and from previous experience I knew the final 2 miles were going to be fast.  However, I had to run around a tennis court area. This involved running up a super steep hill followed by a series of paved switch backs.  I found that simply power hiking up them was just as efficient as attempting to run up it.
Once I was done with the switchbacks I felt a sense of the tides of the races were going to change. I remember from the previous year flying back to the finish and hitting some low 8 minute miles.  However, this year, my legs were just dead.  There really wasn't any second wind and I found myself sputtering.  I'd get rolling for a bit and then peter out.
A runner behind me appeared to be my age so I was working at keeping ahead of him.  There were a trio of runners in front of me -- all younger -- that I was working off of.  I had no idea where I was going to finish in my age group but I was shooting to place in it.
It was also at this point that my hamstring started to twinge and I could feel my patella tendon rubbing against my right knee.  Gosh, could this race get any tougher?  Fortunately, I had less than 1.5 miles to go. 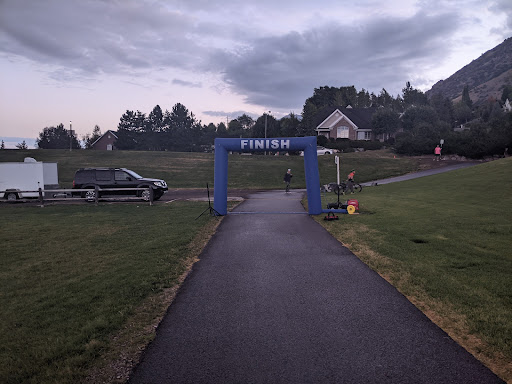 The park came into view and I was elated.  I had dropped the competitor behind me and the 3 runners I was working off of pulled ahead of me (I had almost reeled in one of them near the end).  I cruised into the park and made the final lap around Rock Canyon Park before crossing under the finish line (It was cruel to run by the finish line and still have about half a mile to go).  I was just happy to finish. 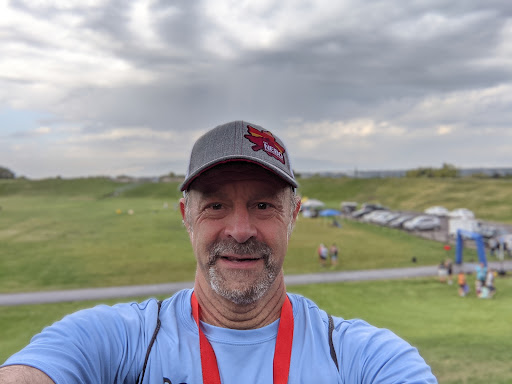 So this race didn't really go to plan.  I have had a stretch of races recently where I've handily beaten last year's time.  This race broke that streak.
Suffice to say though, this course was different from the previous years.  So I am not comparing apples to apples.  I did feel like I finished stronger though. I remember last year's race clawing my way to the finish, where as this finish I was still pushing the pace.
I did finish first in my age group, netting myself a rock award that had a sticker on it.  The rock was picked from the canyon.  I got a t-shirt and there was a decent spread of food at the end: chocolate milk, pancakes, energy bars, oranges and bananas. 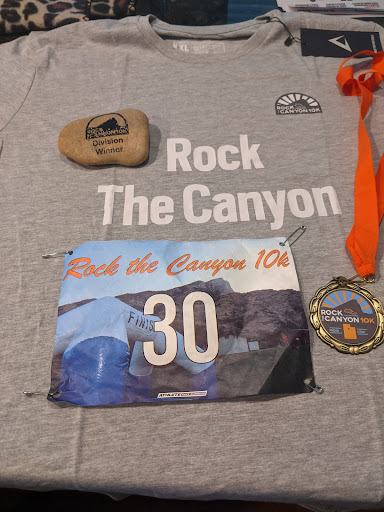 I really like the challenging nature of the course.  I wish I could completely disregard my time versus other 10K courses.  But I am competitive by nature so I can't really say this was a successful race.
My Garmin indicated that the race course was short.  However, after looking at other Strava runners, I am seeing that many runners have recorded ranges in the 6.1X area.  So I am thinking my watch was off (or I simply missed a section of the course).
Either way, this race was fun.  I got in at a seriously discounted price and the course was well marked.  It was beautiful too -- I love running by the stately houses with green trees and lawns.  While the hills can be tough, I was really enjoying the scenery.
I'll likely be back next year to challenge the hills again.
Posted by Eddie Gaul at 7:06 AM