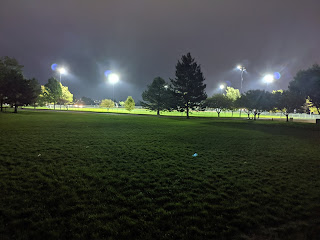 There was a bit of a lull in the race scene this week.  One big race was happening up north but since since I am not really ready to run a half marathon, I found a local 5K race sponsored by the South Jordan Park District.  Regular readers may recall I recently did their Rivalry Run about 3 weeks ago.
The race is literally a 10 minute drive down from me and the price was reasonable.  So needing something to occupy myself with, I decided to pull the trigger and run this race. 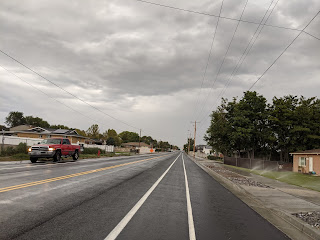 I had a heck of a time finding this race.  The park where it was located, Main City Park, is huge and the race was coordinated with their annual Summerfest days.  Also, they had closed several of the entrance to the park, which made it very hard to get into it.  I had planned to arrive about 6:10 or so, but I spent the next 15 minutes trying to find the way into the park.  I was on the verge of giving up when I found the spot and grabbed some parking.
I grabbed my bib in short order and then it started to rain.  It wasn't heavy, but it was drizzling.  So much for a SummerFest race.  Also, to make matters more interesting, it was windy.
Fortunately, the temperature was ideal.  I got in less than adequate warm-up and toed the line in the dark at 7 AM.
I have a hard time reading my watch -- particularly in the dark and in the morning.  My dark vision is just not very good anymore.  So immediately, I knew I was going to be guessing as to what my pace was and how far I had run (I honestly could make out a little of my current pace and current distance -- but again, it was very hazy).
I had studied the course a bit before the race so I knew there were several turns.  I also knew that the first mile would see a bit of a hill. However, the majority of the run would be flat.
I knew another young man from the Rivalry run and we happened to be starting the 5K together.  For that race I had hung with him for the first mile and I knew his 5K time was about equivalent to mine.  Since I couldn't make out my pace on my watch, I sort of hung with him.
The first mile felt really good -- almost too easy.  Was I slacking?  I didn't even feel my watch buzz for as I cruised through the first mile.  The air temperature was perfect and while it was windy, it didn't seem to be impacting my pace too much.  Also, I cruised up the hill (seen in the 3rd photo above) with relative ease. 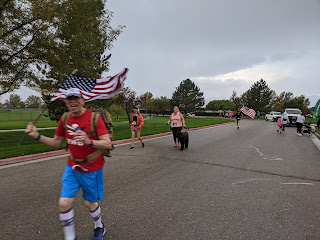 Mile 2 was even faster.  I could a few glimpses of my watch, which stated I was doing anywhere from the upper 7 minute per miles to low 8's.  It was here that I got a bit of help with some downhills.
There were plenty of turns in this race but they were well marshalled by volunteers and road arrows.  I had some fears that I'd miss a turn, but once again it was well organized.
Other than the first half mile and the final half mile, the race was run in the residential areas of South Jordan.  It wasn't a glamorous course and it was reminiscent of the Taylorsville Days 5K I had done back in June.
Usually on a 5K the final mile is one where my pace goes down the toilet.  This race, I was still feeling really good.  I just wish I knew exactly how much farther I needed to run.  Finally, as I rounded the corner back into the park, I saw the finish line arches ahead.  I was trying to chase down a couple of women in front of me and I had the young man I had lined up with at the start of the race behind me.  Any age group award I was gunning for, I was pretty much assured of.  There wasn't any else around.
The young man flew by in the final 100 yards -- I just don't have that natural sprint speed.
And I crossed under the blue arches in 23:46. 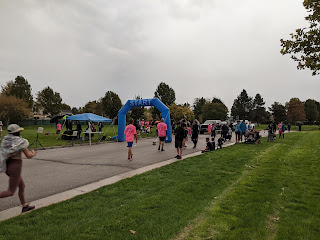 I have mixed feelings about my performance on this race.  I honestly felt like I had run a low 23 minutes -- probably 23:20 - 23:30 range.  With the race being short, my finish time equates to around a 24:30.  I saw some people's reports on Strava showing that they had run 3 miles flat or even 3:02.  But due to the last minute course change, I think they shaved off a good .1 of a mile.
There wasn't much in the way of post race refreshments.  Simply water.  The race did make up for it with a nice technical t-shirt and a beautiful medal.  I honestly think that the medal is one of the best I've gotten this year. 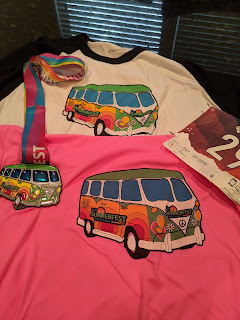 I wound up hanging around to see people I know finish and to see if they did age group awards.  I had placed 10th overall and 2nd in my age group.
They did have awards but it was a bit anti-climatic.  I have a feeling they had a bunch of extra shirts from last year and gave them out as prizes.  Either way, I love a good t-shirt and now I've got two. 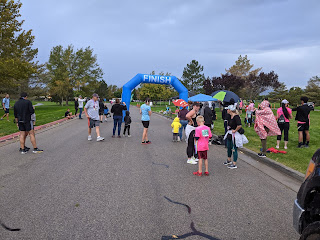 They did have a pancake breakfast at the end (for money) but it was such a miserable day to sit outside. I might've taken them up on it, but the weather was just wet and dreary.
This race was fun. It was low key -- with less than a 100 runners and it was sort of like a park run.  For $25 I felt like I got my money's worth.  Definitely something to do and I felt like I ran a nice race pace-wise. I just wish my overall time had been better.
Posted by Eddie Gaul at 4:33 PM