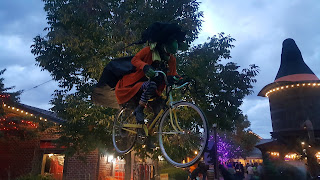 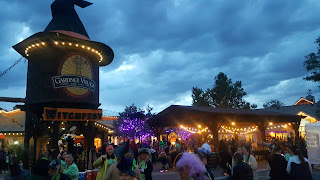 Last year, I ran OnHillEvents Witch Run.  And during the awards ceremony I won a free entry to this year's event.  So when the race rolled around this September, I signed up.  I think this was my first comped race ever.

The race is held at Gardner Village and is used to kick off their fall / Halloween celebrations.  They really go all out decorating the storefronts with lights and spooky stuff.  Every year I am blown away with how much they do to prepare the village shops.

Gardner Village is also conveniently located about 2 miles from my house.  I probably should run as a warm-up there, but it starts at 8 PM and it makes it a chilly run on the way back.  However, I did pick up my bib on Friday night, so I was ready to go when I rolled into the race site at 7:15 for the 8 PM race. 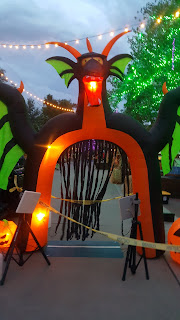 
All week, the weather forecasters were saying it was going to be raining -- hard.  Fortunately, it didn't.  There was some rain throughout the day, but nothing major.  However, even during the race, there were dark clouds hanging over the area.

Occasionally, while I was doing my warm-up, it started to run and I was cursing myself for not bringing something semi-water proof.  Oh well, it was "just" a 5K.

The race started at 8 PM and the race had a good turnout.  Just lots of people in costume.  The themed races generally don't draw the big-time competitors.  So I lined up near the front and once the gun was fired, I ducked under a very small arch and began making my way to the Jordan River Trail. 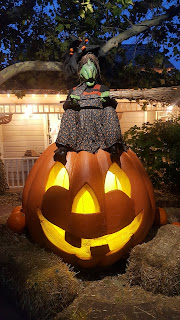 The race is a 1.55 mile out and back on the Jordan River Bike Trail. I train / live near this trail, but on a stretch further north.  I've run on this section of the trail many times so even though it was dark, I knew where to go and what to expect.

With so many runners - and many first time racers it was clogged initially.  However, after less than a quarter mile I was with folks running my pace. 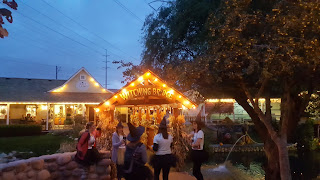 I hadn't done that much of a warm-up and it kind of showed.  I was breathing hard as we ducked under a road and made our way south along the trail.  There are a lots of turns and small hills to begin with, but once you are done with that, it is nothing but straight and flat.

Being that it was dark, I had a hard time checking in on my pace.  It just seemed like work to slow down, find the light button on my Garmin and check it.  Normally during a race, I can just glance down... but my focus was on running and not tripping.  Occasionally I'd throw on my night light to verify I wasn't going to trip on anything but there was enough light that that wasn't too much of a concern. 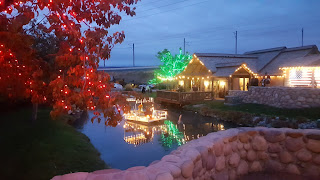 After a mile, the crowd had thinned out and I found myself running with a young woman -- probably no older than a young teenager.  She was holding on to a decent pace and I was using her to motivate me.  And every time I tried to gain ground on her she'd push a little extra harder.  Perfect! Just what I needed.

However, just shy of the turn around point she seemed to run out of gas.

I figured I was close to a top 10 position judging by the number of runners coming back and I was so happy to see the volunteers at the turn around.  I went around the turn around point and ran back, only to be greeted by all the runners behind me.  It was cool seeing all the folks behind me as I received support and accolades.  It just made me push harder.

Another 3/4ths of a mile I ran into the walkers.  90% of the runners / walkers were on their side of the 6 foot wide bike trail.  Occasionally someone would drift over to my side and that's when my head lamp (now a hand lamp) came into action. 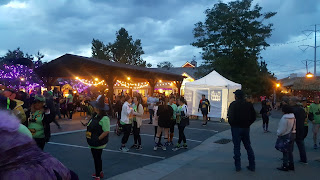 The last part of the race I was hurting.  The 5K, in general, is just painful from start to finish but the last mile always hurts the most.  I wasn't really near anyone so gaining ground on someone wasn't really an option.  There was someone coming in from behind but I had enough ground on them that it would take a while for them to catch up.  I had a sense I was going to finish in the low 25's on account I had checked my splits whenever my Garmin dinged that a mile had passed.

I was so happy to see the finish line but a little dismayed to see almost 26 minutes had elapsed by the time I crossed under the spooky arch. 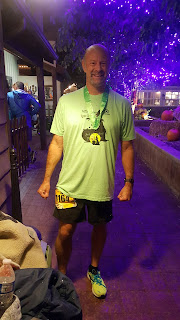 I was a little miffed that my overall time was slow, but it was a night race.  While it seems like you are running fast at night, it is harder to judge your overall pace.  The weather, however, was perfect.

After the race there were a ton of people I knew, so it was social hour.  I wasn't too surprised to see that I had won my age group.  The race is mostly filled with younger folks, families and social runners.  Themed, night races tend to draw that sort of crowd.

Post race refreshments included fruit and ice cream sandwiches.  There was also sports drink / water, but I had stashed my own supply in the bushes before the race. 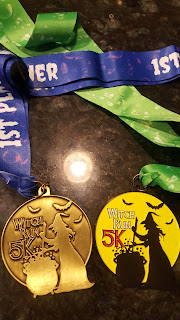 Overall, it was a nice, low stress evening and I came home with two cool medals.

See ya there next year.