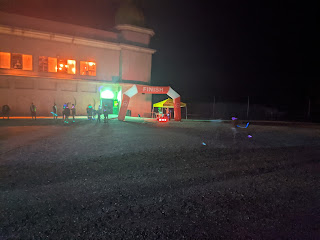 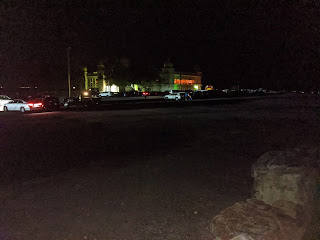 One of my summer traditions is to run the Midnight Races put on by OnHillEvents.Com.  When I first moved to Utah in 2012, this was one of the first half marathons I did.
Since that time, I've sort of written off summer half marathons.  Usually the heat is just too much and it winds up being a sufferfest.
However, I did sign up for the 10K this past winter during a sale event and I figured I'd keep up my summer tradition.

The race had 3 events: a half marathon, a 10K and 5K.  Each race starts at a different time: 10 PM, 11 PM and 11:30.
Normally this race is held at the Legacy Events Center in Farmington. However, it is currently being used as a vaccination site and the race was moved to the Salt Aire on the border of Tooele / Salt Lake County near Magna.  I've run this course several times for the Winter Series 15K and the Salt Aire Half Marathon (now no longer in existence).
The course is run along the frontage road of I-80.  The course is nearly perfectly flat with no significant hills.  Also it is straight, so no turns or having to worry about running tangents.  There is none to little traffic and it is an ideal spot to hold a race.
I got to the race site a little after 10 PM and quickly got my bib.  It was pretty warm so I did a very abbreviated warm-up: mostly some drills and light dynamic movements.  I noticed right away that the visibility was terrible.  Normally this race is held during a full moon, but the moon was hidden behind cloud cover.  Fortunately I had brought a running headlamp.
The race started promptly at 11 and I was off.  Normally races start on the actual frontage road.  This one started near the entrance to the hall.  To avoid getting hit by incoming cars, the race made a lap around the perimeter of the parking lot.  The parking lot is a gravel / dirt lot, so this was probably the iffiest part of the race.
I'll be honest, I cannot see very well at night.  I had my headlamp, which I used sporadically, but I cannot set anything up close, particularly my Garmin.  I can read the mile splits when they occur but other than that I can't see anything without a pair of bifocals on.  So I was pretty much running 100% by feel.
My suspicions proved mostly correct: the race was lightly attended there were only a handful of master level runners.  So I knew I didn't have to go all out on this one to earn at least an age group award.  Also from previous experience, I knew that running at night is not usually conducive for a personal best.
So I settled into what I thought was a 10K pace.  The first two miles went by fairly quick.  The lead pack blew by me and for a brief while I was running with what would be a front runner for the female race.  Eventually I would be running 100% by myself.
The course was an out and back, so I did have some company from time to time.  The lead pack from the half marathoners were heading back as well as the leaders of the 10K.  Eventually, I'd hit the pack of 5K runners as well when I was between mile 4.5 and 5.5.  It was nice to cheer one another on and it spurred me to dig deeper and give this race a good go.
While I felt 100% in control for the first 2 miles, I realized I was starting to hurt a lot by the time I hit mile 2.  It was warm and as per usual with night runs, my dinner wasn't exactly sitting well.  It wasn't an emergency but I definitely felt like it was holding me back.
Races in Utah tend to be spotty as far as true distance.  I was wondering how close of a "real" 10K this was going to be.  The mile markers were pretty accurate as I breezed by them but I was hitting my Garmin's mile after the mile marker.  I am happy to report (although I didn't know it at the time) that the turn around was correctly marked at 3.10 miles.  It was such a relief to hit the turn around.
As I made my way back to the starting line, I was trying to figure out if I was gonna have to turn on the jets.  Fortunately, the next closest competitor was about a quarter mile behind me.  So I figured I wouldn't stress out someone passing me in the final minutes.
I noticed however that my pace was dropping.  I kept willing myself forward but I already knew I was redlining my heart rate.  I wasn't too worried about the folks behind me catching me -- just yet but I kept working on keeping my legs turning over.
With about 1.55 miles to go I could make out the lights of the finish line.  It seemed so close, yet so far away.  At this point too, it was hard to determine if anyone was chasing me down.  The 5K runners were now making their way back and some of the half marathoners were coming in. 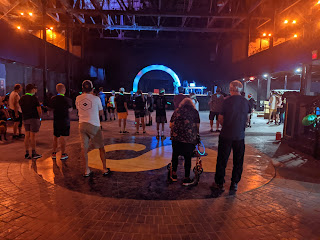 I finally reached the turn back into the parking lot.  I had to turn on my headlamp at this point because we had to run down a small ramp and the footing was a little uneven here.  I definitely had to slow down even though the majority of it was on stable ground.
I really had no idea what I finished at when I crossed the line -- or even how far I had run (the mile alerts on my Garmin had largely registered with the course's) but I figured I had crossed around 52 minutes. 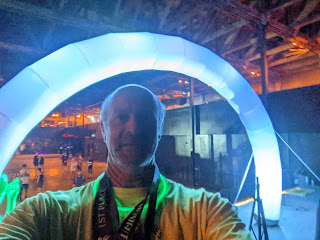 My official time was 52:11.  I suspect that is the gun time.  I started my watch when I passed through the arch and I came up with 52 minutes flat.  Not great but not awful for a night run.
I finished first in my age group and 8th overall.  The race was lightly attended so I figured I would have an easy shot at an age group award (it turned out only 2 people were in my age division, including myself) 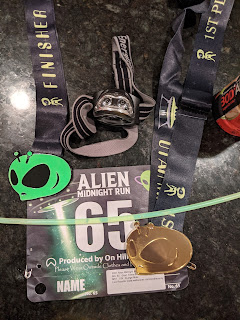 Post race refreshments included water / Gatorade and ice cream sandwiches.  They also had a bagged orange, granola bar and string cheese.
Overall I was happy with my experience.  It was kind of a new course and I ran fairly well all things considered. It was also a young / fun crowd.
I'll likely run this race again next year -- it'll be interesting to see where it is will be held.