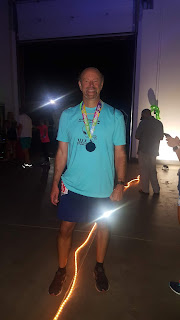 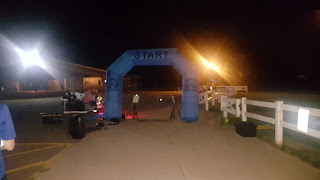 
This past November I signed up for this race -- I got it for a steal at about $25 for a 10KM.  It also helped that I've done this practically every year since I've moved to Utah.  I still remember the first time I ran in 2012 and managed to eek out a blazing 1:41 half marathon.

Some 7 years later, I still show up to this night race.  It is one of the things I "must" do and it is just fun yet competitive race. 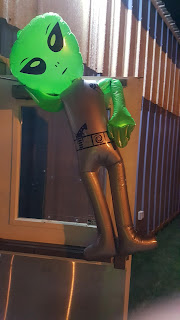 I rolled into the race at about 10:15.  Plenty of time for an 11 PM start.  I remembered all the times when I did the half marathon and I got bused out to the start, so being there after nightfall and not having to jump on a bus was a nice experience.

Packet pickup was a snap and I used the bathroom a time or two before doing my warm-ups.  With it being hot, I didn't really need to warm up that much and sufficed to do a few strides and hip swings.

The race started at 11 PM and I was off and running.

Both trails are nearly identical and since we were running at night, I couldn't tell the difference.  Although the Rail Trail had a few cattle guard fences up that we had to circumnavigate.  The race director had put glow sticks on them and volunteers to help direct traffic. 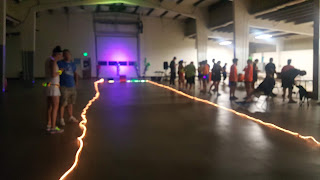 The first quarter mile took some getting used to running.  I was carrying a headlamp that throughout the race I would periodically use, but for the most part I ran 100% in the dark.  To help see each other, though, we wore glow stick necklaces.

The first mile went by pretty quick and I was happy to see an 8:30(ish) illuminate on my Garmin.  This was about the pace I wanted to run and I was hoping I could hold it.  I was breathing comfortably but the air was a little humid and despite it "only" be 70F degrees, it was sort of humid.

Mile 2 I was starting to find my groove.  The race was lightly attended and the leaders had left me in the dust and I was running with the faster-than-the-middle-of-the-pack group.  As the race went along, people came and went but it was pretty much a solo affair.

Mile 3 I knew I was hurting and while my pace didn't suffer, it seemed a lot more of an effort.  With any new course, I was curious as to when I'd turn around and head back.  Fortunately, the course was well marked and once I hit the second aid station, I looked down at my watch to see a 3.10 distance.  Always a relief to know I am not running too far.

Mile 4 was a struggle.  I could feel my pace dropping and while I had ate light beforehand, it seemed like my stomach was full.  Was I going to puke?

I contented myself with just working through the discomfort and gazing at some of the bolts of lightning raining down on Antelope Island.  It was truly spectacular and part of me just wanted to find a camera and take pictures.  But I had a race to run.

Mile 5 found my pace slowing gradually.  I was trying to do the math in my head on how many people that I had seen come back were in my age group.  I looked behind me and didn't see anyone and at this point too I had people from the 5K on my trail as well as the half marathon.  So who knows who I was competing against now.

It was good to see the 5K runners heading out and got words of encouragement from them.  Again, it was a small race compared to years past so there wasn't as much excitement.

Finally, mile 6 came and I had to run through the tree shaded final stretch.  I flipped on my headlamp and I had to dial my pace back a little.  Footing had turned from asphalt to dirty and grass (at times).  It was just ripe for a fall, but that never happened.

I cross the finish line after a sprint to the finish.  Another 10K in the books. 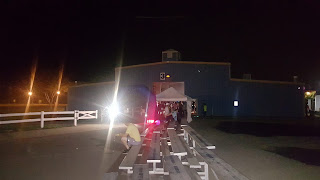 I grabbed a cool finisher's medal and walked off the nausea of having run fast in the heat.  I was "okay" with my time.  I was a little upset that my pace had dropped so far off in the last mile. 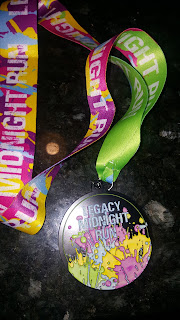 The medal was very nicely designed and heavy duty.  Each finisher, regardless of the race distance received one.

Afterwards, there was a bit of a party.  The Legacy Events Center, where the race was held, had some indoor shelters and there was an alien theme, music and glow lights.  There was also an ample selection of food: cotton candy (yuck after a run), Powerade, fruit, and Fat Boy Ice Cream sandwiches (yum).

I wound socializing and waiting for the results.  I was excited to see that I placed.  However, by the time the awards were being handed out it was after 1 AM and I was beat.

I got what I paid for at the race: a good time and an accurate, well marshalled course.