July saw a very modest mileage amount.  It continued to be ungodly hot here and while I have successfully transitioned to running in the mornings, it has been harder to get in longer runs.  Couple that with the fact that I've been racing quite a bit.
I've been using the races as a "hard day" and sometime mid week I do a structured speed workout. Sometimes it may be 2 - 5 minutes at 5K pace followed by 50% recovery or simply 30 - 60 second hill repeats.  I also tend to do strides once or twice a week.  So my training for 5K / 10K distances is spot on.  My endurance, however, has taken it on the chin.
But so far, the plan is going as I figured it would.  My goal was to improve my speed and I was willing to sacrifice a bit of my long run. This is probably the first summer in a very long time where I haven't put in any long runs.
Also, I've  been a bit more liberal with days off.  Normally I run 6 - 8 times a week.  This summer, aside from less mileage, I've also made it so I only run about 5 times a week.  This has allowed me to feel a LOT less sore and I can approach my workouts with a bit more intensity.
The question though remains, has it worked?
A little.  It's hard to say whether I've gotten faster on account that the weather is now a LOT warmer.  I think the payoff will come when the weather gets cooler.  I am hoping to get in some 5K races soon which should be indicator if my progress has stalled or has gotten better.  Hopefully the weather and race conditions will make it clear what has happened.  Also, I do plan on doing a year end time trial of sorts to see how I started the year and how I ended it.

My weight continues to be in check.  I gained a few pounds and I am okay with it.  When the scale starts to creep up, I dial back my intake.  I need to be a bit more disciplined since my weekly mileage is fairly limited (about 30 - 35 miles per week).
I continue to work at home, which allows me to get a 30 minute walk in every day (on top of my running) as well as not eat food I shouldn't.  So there isn't much candy around the house and I am not tempted to go eat heavy Chinese food or pancakes.  I do eat out but a lot less frequently.
I also approached vacation a little different.  When I'd go on vacation I'd inhale a ton of food, particularly at the all-you-can-eat buffets in the casinos.  Now I do eat a fair amount but the dessert it hit a lot less and I try to load up on proteins and vegetables.  I went to Reno where I had more than my fair share of food and I managed to keep my weight in check. 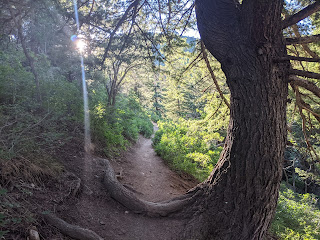 I am still walking once or twice a day and I hike almost every weekend (which replaces a long run but I don't include it in my weekly miles).  It makes for easy cross training and allows me to build some leg strength.  I also do some core exercises a few times a week.
I am definitely a work in progress but I like the changes I've made this year.  I am hoping they pay off come the fall race season.

Email ThisBlogThis!Share to TwitterShare to FacebookShare to Pinterest
Labels: bibchat, running, This Month in Running