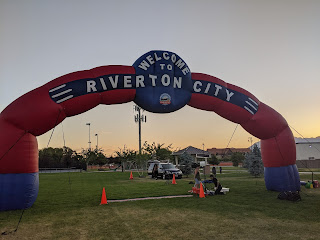 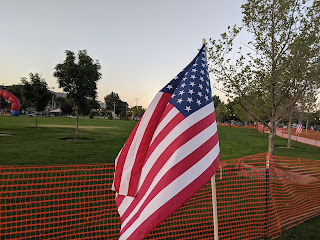 Like Thanksgiving, the 4th of July is one of those holidays where races are being run in multitude.  There are just a ton of races out there and finding one can be interesting.
I decided to jump into the Riverton 10K.  It was affordable, close to home, and a course I was somewhat familiar with.  The Riverton Half Marathon, which is held in March, has been run on much of this course,
The race organizer puts on well organized races and they are held at the local park, so it is an ideal venue for the race and was home to their 4th of July city celebrations. 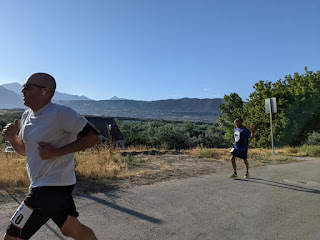 I rolled into the race site just after 6:15 for the 7 AM start.  Packet pickup was a snap and I used the trek to to the pickup and back as a bit of a warm-up.  It was already pretty warm so I was going to limit my warm-up.  I did several drills and loosen up and I honestly felt really good.
My goal on this race was to get under 50 minutes.  50:30 also seemed like a realistic "B" goal.
Around 6:55 AM we assembled at the starting line and by 7 AM I was running.
I was in race mode and I was wearing my racing shoes -- a pair of Saucony Fastwitch 5's, which I've owned for years, but just rarely use.
It was warm -- in the low 70's and there was a bit of a breeze coming from the south.  I hadn't anticipated that but I just kept going.  I also noticed that it was warm... like uncomfortably warm.
The first mile went by fast -- thanks in part to a slight downhill.  I was a bit shocked to see an 8:05 flash on my Garmin after mile 1.  I expected it to be a bit slower, due in part to not being able to dictate my own pace.  We were running a stretch of sidewalk to exit the park and it was just congested.  It wasn't long before we had the entire half of a street and I was able to settle into my 10K pace.
The first mile is all residential street -- eventually dumping you onto Lover's Lane.  They are doing a lot of construction along there so it is a dirt road and hilly. I still felt somewhat okay as I breezed through the first aid station. 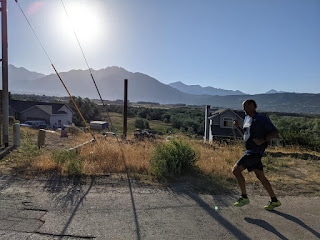 Mile 2 the screws were put to me and I knew this was going to not end well.  My legs started to feel heavy and it just seemed a lot harder to run.  I took a bit of solace in seeing my time of 8:09 show up as I crossed mile 2, but the way I felt, I had my doubts that a sub 50 minute 10K was in the works.
Mile 3 had me wishing I had signed up for the 5K (not that it would've been much prettier).  We were on the bike trail at this point and the race had thinned out.  I was in survival mode and keeping a watchful eye on my Garmin.  I hoped this race wasn't going to get ugly but I had a feeling it would... I felt like the first 3 miles were mostly downhill and it was a semi out-and-back course....
Mile 4 definitely saw my race go into the proverbial crapper.  Returning back along Lover's Lane just wiped me out.  There was a hill that wasn't terribly wrong, but I just had nothing on the ascent. I think my Garmin even thought I had quit running.
Finally we got off of Lover's Lane and its rolling hills.  I tried to make a good showing of it by hammering the final mile.  We were running with the slower 5K runners (who had started about 15 minutes after the 10K runners).
I kept willing the final turn to come in.  I kept telling myself just a few minutes more.
The crowd got me motivated in the last quarter mile and I gave what little I had left before crossing under the Riverton's arches at a time well over my "A" and "B" race. 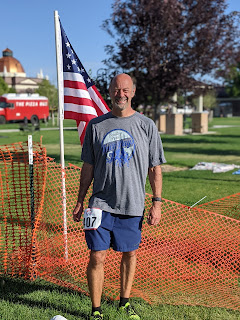 So this was probably my worst race this year -- at least in terms of performance.  There just wasn't much going for it and whether it was a week of hard training, warm weather or just an off day -- it wasn't my race.  And after having run really well in March at the Riverton race (and recent 5K races), I felt it was reasonable to hit a low 50 minute 10K.
I actually felt better than I expected I would after the finish.  Part of me wonders if the heat got into my head and effected my race more than it should've.
Post race refreshments were water, chocolate milk and bananas.  They also had ice cream popsicles and orange juice.
I paid an extra $10 for the shirt.  I wish it had been a 100% polyester but it is of good quality and I have a nice memento from the race.  They also awarded finisher's medals.
The race came up well short on my Garmin.  However, after talking with several people after the race, most got between 6.14 and 6.16 miles.  Their MapMyRun map plotted out 6.24 miles.  I suspect people (including myself) were aggressive in running the tangents while the course was probably measured based upon being on a certain side of road.
Overall, I liked the course.  It was challenging and offered some beautiful scenery -- particularly through Lover's Lane.  I paid $20 + $10 for the shirt -- so for a 10K a pretty nice bargain.  I would certainly do this race again. 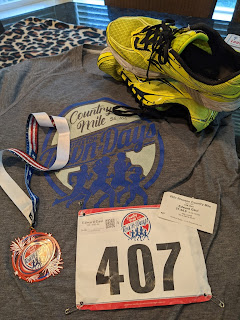