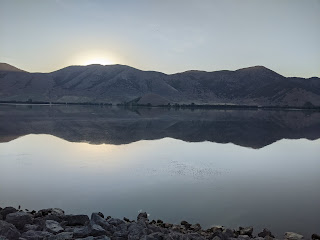 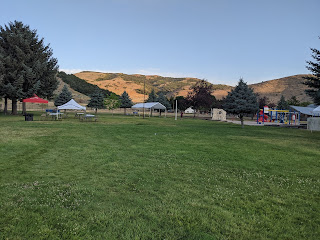 Another weekend another race.  And this week's run took me way up north to Mantua Utah (which apparently is pronounced mana-way).  I think in my 9 years of living in northern Utah, I have driven by Mantua once, but never stopped in.  And to be honest, prior to this race I don't think I could've told you where Mantua was.
But this race was one of two going on this weekend and I opted to make the 70 mile drive up north to check it out.  The race is long-running -- it's been around for a while -- and it would give me an opportunity to check out the Mantua Reservoir, which is where I'd be running.
Plus, it's been a while since I've run a 5 mile race -- a bit more endurance than a 5K and one mile less than a 10K. 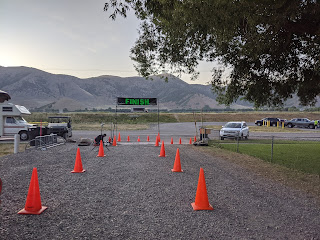 I arrived at the race site at about 6:30 AM for the 7:30 AM start.  I was there pretty early which afforded me a great parking spot, ample time to get my bib / shirt and use the facilities.  Plus I got some pre-sunrise photos.
The race is run around reservoir.  Most of it is on hard-packed gravel and dirt -- almost as hard as asphalt, but not quite.  It didn't afford much of a bounce but it was soft and well groomed. 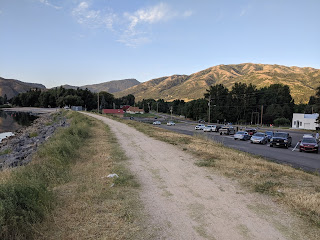 The race started promptly at 7:30 and we headed south down Main street.  This section was paved and while it was crowded with runners, we had plenty of room to work with. 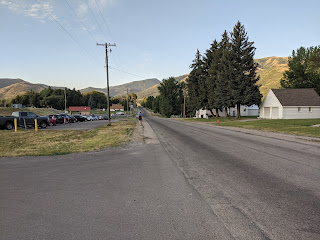 I got off to a decent start and held back.  I had a rough goal of hitting 8 minutes per mile.  Not knowing what lay ahead as far as course layout had me wondering.  We took about a mile's worth of asphalt running before jumping onto the reservoir trail.
This race was well organized and they had fairly accurate mile markers staged at each mile.  I hit the first mile in 8:05, basically meeting my goal.  I felt pretty good but it was definitely warm as the sun rose over the eastern mountains. 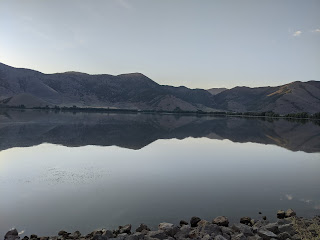 The race had 235 runners so I was never really running alone.  Occasionally speedy runners would fly by me, but I just settled into my pace.
Mile 2 I still felt pretty good, but I could feel the fatigue settling in.  I hit 8:15, which was still about 10K pace.  Occasionally we'd dip into pockets of shadows as we got closer to the eastern mountains, but mostly it was exposed.  There were some sections of the trail where you could see the reservoir, but mostly it was blocked with deep green trees.  It was very peaceful and scenic. 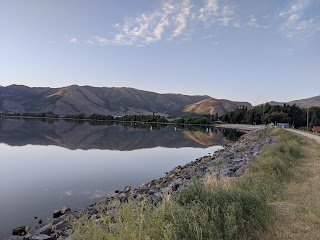 I knew I wasn't having an "A-level" race at about mile 3.  My splits weren't improving and I hit yet another 8:15. And knowing my previous race history, I tend to get slower as the race progresses.  I began to wonder what elevation I was running at -- which can definitely slow you down (it was over 5000 feet) 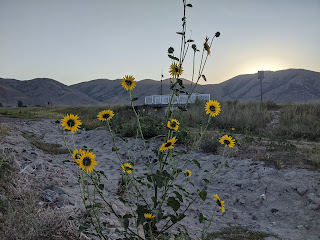 I was so relieved hitting mile 4.  I loved running along the reservoir but at this point we got back into downtown Mantua and I could see the finish line ahead of me.  I was hurting and occasionally my pace would come to a crawl.  I would catch my breath and then start up again.
I kept glancing at my watch and it was reading in the low 4 for distance and I could see the finish far closer.  Could the race be short?  There was no way that this race was going to be a 5 mile race. 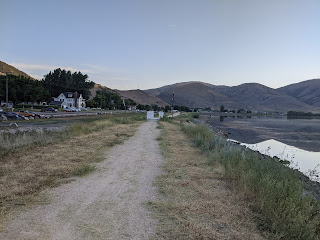 I kept watching the runners in front of me to see if we ran past the finish line or if I needed to push it.  My eyesight these days isn't the best.
I hate running by the finish line, but that's exactly what we did.  At mile 4.6 or so, I breezed by the finish line.  I just wanted to run down the reservoir's embankment and finish.  It was at this point that another runner who looked to be in my age group passed me.  Desperately, I tried to keep pace but I couldn't.  My legs just felt incredibly heavy.  I had hopes that I would find a 2nd gear on the final finish and maybe if he hadn't started too far behind me that I could sneak by him. 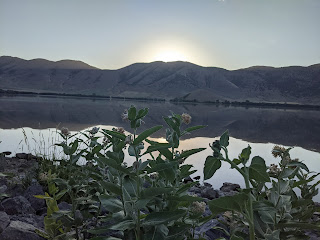 Another quarter mile or so, we ran down an embankment and made the final home stretch.  The guy I so wanted to catch up to probably realized I was gonna do my final push and he accelerated too.  And unfortunately, it cost me an age group award by 7 seconds. 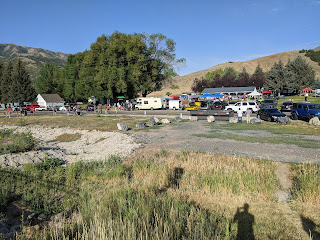 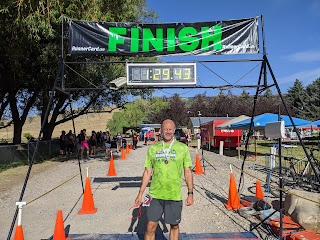 It was warm.  If this race had started at 7 AM, it would've been much better.  But 7:30 it was and I was covered with sweat.  After finishing, I leaned against a fence in the shade and tried to regroup.  I had really pushed the final sprint and it almost caught up with me.
They had ice-chilled Gatorade at the finish as well as bread.  I had brought a ton of snacks with me, so I really didn't need any food.  They also had some popsicles. 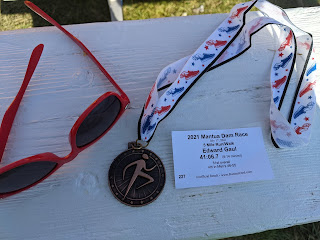 This race was super organized and before I could go to my car and snap a few more pictures of the lake, the organizers were doling out the awards.  For a small town race, they ran this like complete professionals. 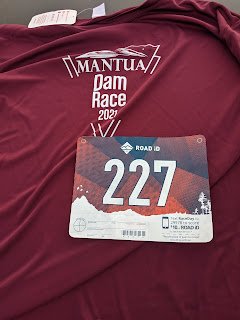 This race was super affordable -- coming in at around $25.  I got a technical shirt (that I will gladly use for running), a finisher's medal and a really nice race experience.  Normally I wouldn't be bothered to travel this far for a this short of a race, but I was happy to go and experience a part of Utah that I was unfamiliar with.
Race wise, this was a pretty standard race for me.  Looking at my time, it is fairly comparable to the 10K races I've done.  This one was flat however but at a slightly higher altitude, which will take off a little time.  This wasn't a race to write home about, but it still wasn't a disaster.
Overall, if this race lines up in my schedule next year I will gladly do it again.  I had a lot of fun and thoroughly enjoyed the course.
Posted by Eddie Gaul at 3:16 PM