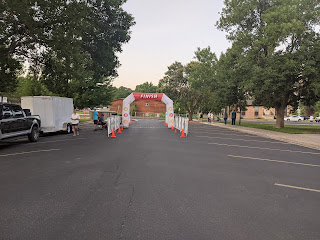 One of my summer races that I try to do is the Farmington Festival Days Races.  It a great bargain -- $20 for a timed race, t-shirt, and an epic post race breakfast.  And the course is actually really pretty.  What's not to like?

The race is held in Farmington, about 15 minutes of downtown Salt Lake City.  Starting at the Farmington City Hall.  It is coordinated with the Farmington City festival and they offer two race distances -- a 5K and 10K.  Years ago (2012) they had a half marathon but that has been discarded..
I registered several weeks out from the race and rolled into downtown Farmington by 6:15 for the 7 AM race.

I did a very brief warm-up pre race.  Mostly dynamic stretches and maybe a few hundred yards of running.  It was warm and I really didn't need to do much to feel good about toeing the line.
The race started promptly at 7 AM and almost immediately you are greeted by a hill.  It isn't an awful hill, but mentally if you aren't ready for it, it can take the wind out of you.  Fortunately, having run this race a few times, I knew what to expect, so I held back.
After ascending the hill you make a right onto a main drag and head south.  There is plenty of shoulder room and you are running with the speedier 5K runners -- so you really don't know who your competition is just yet.  However, this is the fastest part of the course.  You now have a fast downhill segment that really boosts your confidence.
I had hit the first mile at about 8:15 -- exactly where I wanted to be and the 2nd mile I smashed at 7:34 -- again thanks to the downhill.  Around mile 1.50 or so the 5K runners peeled off from us, so the crowd definitely thinned as we continued further south.  I had a lot of memories of running this stretch of road from previous races -- the Handcart Half Marathon also follows this route.
Eventually we hung another right and headed down a hill and made our way to a bit of a grind.  I rounded the corner and I hit the flat section.  I felt like I was running fast, but when I glanced down at my Garmin, I wasn't.  Like my 10Ks, at about this point, I am hurting.  But my legs felt good and I kept hoping to hold or improve upon this pace. 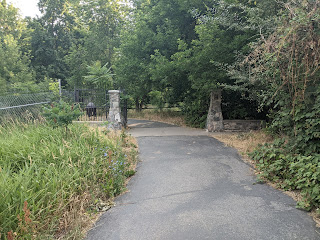 Around mile 3 the slower 5K runners joined us.  They were about 2 miles into their race.  It was nice to work off of them but made some of the areas a bit congested.  I also hit my first aid station and pretty much tossed a cup of Gatorade in my mouth and spat it out (I can't really drink when I am running that quickly).
There was a park on my right and the din of the I-15 interstate next to me. There wasn't much traffic along this road and scenery of the mountains on my right and some fields kept me going.
Finally, the 5K runners made another right and separated from us.  I was starting to regret not doing the 5K but I came here to get my money's worth -- so I was on the docket for another 2 miles!  The crowd had really thinned out.  There were a few runners in front of me and a few behind me, but the throngs of running were gone. 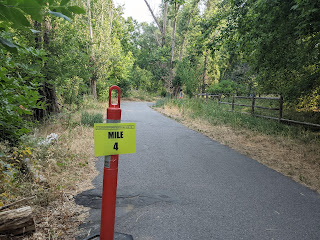 Mile 4 greeted us with about a mile run along the Farmington Creek Trail.  I love this stretch of the course, but it is deceptively uphill and involves a lot of turns.  It was significantly cooler here and the scenery was just really nice along here -- including some buffalo and elk at the Lagoon Amusement Park. 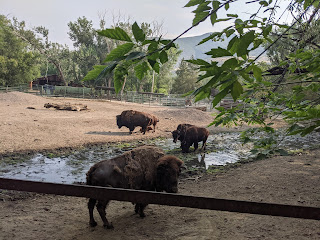 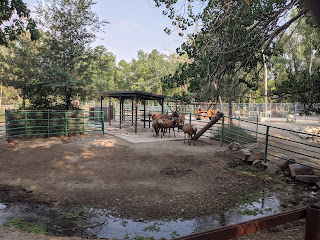 My pace totally fell off here -- as usual.  I actually ran slower for this mile than I did in 2019.  I was stunned when I saw a 9:30 on my Garmin.  What -- that's my training marathon pace!
I was pretty cooked at this point.  My overall mileage has taken a hit of late and I felt like my endurance isn't all there.  Also the slight inline just took the starch out of me.
Finally we exited the circuitous paved trail and jumped onto Main Street.  There is a wide shoulder here and I knew I was in the homestretch.  Also, I had a bit of a downhill here and I did finally get my 2nd wind.  I knew I couldn't catch the people in front of me (they had put some significant ground on me) but I could improve my time.  I really focused on just putting one foot in front of the other as I sped down the old tree-lined street. 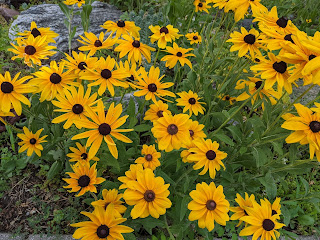 I had a small cheering section near the finish line as I made the final turns, which were fortunately downhill.  I gave it all I got and cruised through the finishing arch. 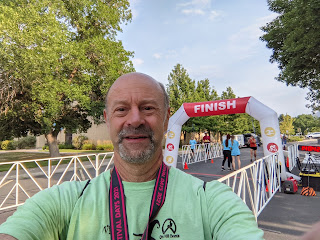 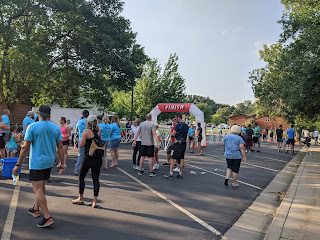 I was able to shake off the fatigue of running pretty quickly.  I actually didn't feel too bad -- it was hot but I definitely have been through worse as far as heat conditions go.
I was greeted with a bottle of water -- but no finisher's medal.  I had forgotten if they had one -- but their finisher's medal -- so to speak -- is actually their self-described "Best Post-Run Breakfast in Utah".  This included 2 choices of meet, French toast, a fruit cup and chocolate milk or orange juice.  Definitely epic and tasty! 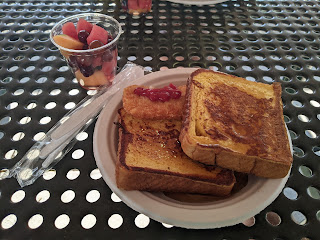 One cool thing about the race is that they have a QR code on your bib that you scan for results.   I was pleased to see I had placed 3rd in the 50 - 59 age division.  I had seen a number of runners that appeared to be in my age group and I half figured I wasn't going to be in the winner's bracket this weekend.  Turns out I placed 3rd.  I kept pressing refresh on my phone as time went on to make sure someone hadn't nudged me out of this chip-timed race. 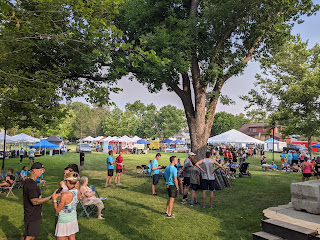 The finisher's medal was actually very nice -- heavy-duty and well designed.  Truly worth working hard for.  The inner portion also spins.  I was shocked that it wasn't a cheap-o one.
The shirt is made of the cotton / polyester blend.  I love their shirts -- very nicely designed.  Just wish they were 100% polyester.  So this one probably won't be worn for races but for easy runs or bumming around the house -- definitely. 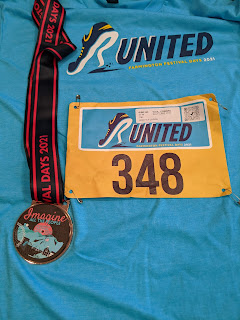 My performance was decent on this race.  I knew I wasn't going to break 50 minutes on this course.  It is too hilly and the air temperature wasn't conducive to really running fast.  That being said, I did run better than I did at last weekend's 4th of July race in Riverton.
This race was definitely worth the $20 and I plan on being there next year.  It was well organized and professionally timed.  Packet-pickup at the city hall was also easy and convenient.  The course is mostly a residential run, but it changes enough from ordinary houses, to tree-shrouded bike trail, and then bucolic tree-lined main street with some classic houses.  The crowd was good and friendly too -- just an epic locally organized race.
Please note: all course photos were taken after the race.