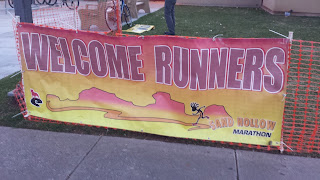 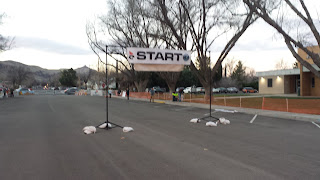 I am a repeat customer to the Sand Hollow Half Marathon.  It is one of my favorite and quite affordable.  With the race season just starting off, this is an opportunity to race in better weather (i.e. warmer than Salt Lake City) in a part of the state I'd like to visit more often that I do: Southern Utah.

There is a lot to do down in Southern Utah.  It also usually kicks off a weekend in Mesquite, NV where I can get my Jacuzzi and buffet on.  Southern Utah also offers a bigger contrast over northern, as there are a bunch of national parks and beautiful red rock formations.

It was quite an adventure down to Hurricane when I left on Friday.  I ducked out of work a little early.  I had heard there were warnings of some snow flurries but none of the weather sites seemed to be too alarmed by it.

Well by the time I got about 90 minutes out of the city, it started to snow.  It wasn't necessarily sticking but it did make driving a little more nerve wracking.  The central part of Utah doesn't have a lot of civilization and I was really worried about driving into a ditch.  I saw at least a dozen cars, some of them in really bad shape, off in the ditches.  I didn't want that to be me.

All told, it probably took me an additional 45 minutes to get to my destination.  I was so stressed from the drive that my muscles almost hurt. 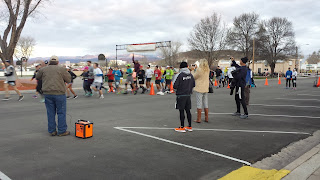 I stayed at a hotel down the street from the race and rolled in about 40 minutes before the start.  I nabbed a really good parking spot.  I had picked up my bib the night before so I was all set to run.

I was a bit apprehensive about this race. My last half marathon didn't go very well and to be honest, I wasn't feel "on".  Also, my training hasn't really gone very well.  I've been sort of slacking on long runs.

So I wasn't expecting much as I toed the line for the 7:30 start.

I started off cautiously and decided to run by feel.  The first two miles are run in a residential area.  There are a few turns as we make our way through them.  The course was well marked and marshaled.  I wasn't leading by any means, so I was just following the pack.

It was a little chilly at the start.  I had two shirts on, shorts and throw away gloves.  I sort of regretted wearing two shirts, but overall I don't think I was overheating.  When the course was shaded I wound up wearing the gloves and later I stuffed them in my pocket.  They were a nice accessory to have.

I wasn't too surprised to run my first 3 miles at about a 9 min / mile pace.  I felt okay but I was wondering if my lack of endurance training would bite me and I'd start my crash and burn around mile 6.

Eventually the course takes you out of town and you are surrounded by pastoral scenes. An LDS church spire, cows and horses baying in the background.  It gets rural and bucolic.

There were some rough sections of road and I twisted my ankle in a pothole.  Luckily not damage was done.  People were more spread out, but I was always within shouting distance of someone in the race.

Just shy of mile 5 you hang a left.  You go about another mile before you get dumped into a well-to-do neighborhood.  This was my favorite part of the course last year.  The smells of the desert are amplified here.  Also there are a lot of modern houses that reminded me of New Mexico: the boxy desert house that were nestled on hills.  It was tough going here but all the sites helped distract me.

Finally just shy of mile 7 we reached the turn around.  I couldn't be happier.  I was still feeling good and I knew I had a solid of mile of downhill.  It was nice to blast down that stretch.

Instead of an out-and-back course, you continue to go down a stretch of road.  There was a fair amount of traffic on the road, but we had a good shoulder to run on and I think drivers were aware a race was going on.  I never felt like I was in danger.

This mile seemed to go on for an eternity.  I didn't have anyone behind me and I was working off a guy who might've been in my age group.  My goal was to hang with him as long as I could.  However, during this stretch he started to fade and I found a second gear.  I made my move and I think that sort of dropped his spirits. 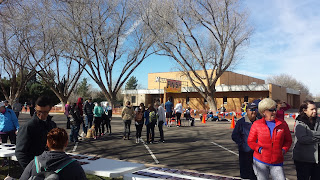 At some point, you rejoin the course where we had started.  I had made mental notes of the first 3 mile markers from the distance from the start.  I knew they were off.  It was nice to know that when I passed the mile 3 marker, I really had about 2.9 miles to go. I got another second wind here as I was pushing myself in the final 5K.

I wasn't dying and was actually pretty happy with my pace.  I knew it wasn't going to be a PR day but I was actually going to turn in a decent time.

The final half mile is a bit of a heartbreaker.  You can see the finish line in the distance and it seems like you only have a little more to go, but in reality it's quite a ways. I wound up catching another male runner before crossing the finish line in 1:54. 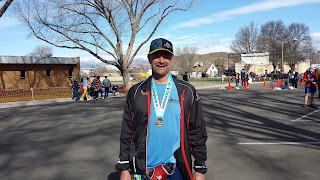 I was actually pretty happy with my time.  While I was a minute slower than last year, all things considered, it was a "win" for me.  I had been sick for most of the month and my training hadn't gone well, yet I had finished a half marathon without going into a death march / I hate running mentality.

I wound up socializing with some of the other runners from Salt Lake.  We all complained about the horrible drive down but were all ecstatic about the highly agreeable running weather. 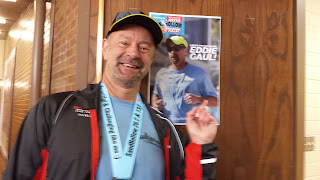 What was cool about this race is that I know the race director.  I've done his race a few times and I always make it a point to say hello when I do the St George Half Marathon in January.  He surprised me by making a promotional poster -- with my photo on it.  It's a beautiful piece of work and I was flattered.  He had a bunch of extras and I managed to bring a stack home.  Totally cool and made my weekend.

Post race refreshments included water, chocolate milk, brownies, fruit and pretzels.  He even had some sodas.  Overall I was really happy with the post race fare.  I think everyone else was too.

The mile markers were fairly close, but I think once again the course is a little short.  Most people's Garmin watches reported a short course.  I don't think anyone was complaining though.

There were plenty of aid stations with volunteers. They had water and Gatorade.  Some had gels and fruit.  There were plenty of them and I probably didn't need to carry my hydration, but I prefer to be able to drink when I think I need to.  And sometimes volunteers weren't ready for me, so I could afford to skip them. 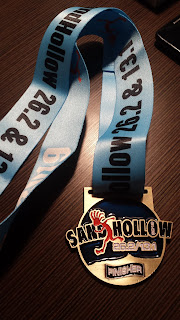 The medal was very cool.  They had a decent shirt as well -- it was a cotton / tech blend.  I am not sure I am fan of that but I think more races are starting to give them out.  I prefer pure polyester for running.

Overall, I was happy with my race experience.  I am buzzing from a decent race performance despite not being 100% ready.  The weather couldn't been nicer and I really enjoy the variety of the course.